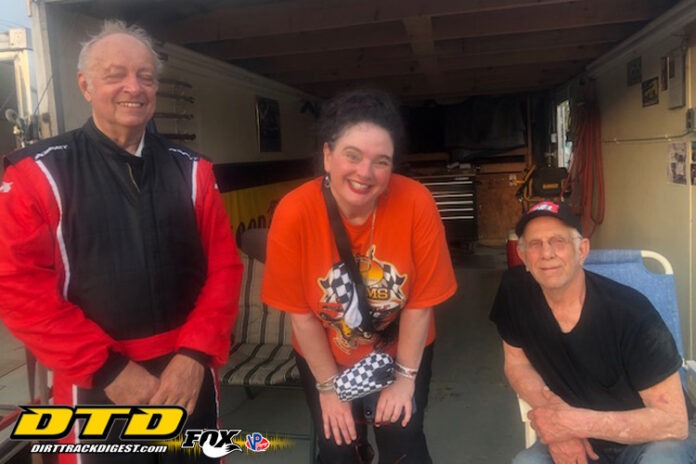 On Friday night at Albany-Saratoga Speedway the Mohawk Valley Vintage Dirt Modified Series was in competition and we got to speak with two of the legends of our sport, Stanley Wetmore and Mert Hulbert of Oak Hill, NY.  Mert was sitting in the hauler of his son, Darrell who competes in the red No. 8 vintage Modified, a car familiar with veteran fans that watched Mert when he ran the famous Kennedy’s Garage No. 8.  Mert’s career included 26 wins at Lebanon Valley, eight wins at Albany-Saratoga, 12 wins at Devil’s Bowl and three wins at the Cairo Fairgrounds.

Standing alongside, Mert was another legend, Stanley Wetmore and one of the Oak Hill Boys.  With them was Denise Markle, one of the Vintage Series volunteers.  Denise is the daughter of the late Jimmy Markle, one of the legends of Lebanon Valley racing in the early days.

We always love hearing stories of the days gone by in our sport and these three all have plenty.  Stanley said, “I am still enjoying myself racing.”  Mert said he would change nothing in his racing career and would repeat it exactly the same.  Mert and Stanley both agreed they raced many laps representing the Oak Hill Boys.  Denise said she loved being able to talked with two people that raced with her dad.  It’s always a great night when the Vintage group comes to a track; the stories of days gone by are frequent and reminiscent of great racing in a time when things were much simpler.

Jessica Friesen of Sprakers made history on Friday night when she became the first women to win a Modified event at Utica-Rome.  With her husband, Stewart, racing in the NASCAR Truck Series in Texas, Jessica kept the Friesen name in victory lane at the Vernon oval.  Jessica is no stranger to victory lane at the track having won in a Sportsman at the track where she also had a Sportsman track championship.  She has also been very successful in Sprint cars.

It was Yurkewecz Auto Crusher night at Fonda on Saturday and Mike Mahaney of Kings Ferry, NY crushed the competition and stepped into victory lane at the Track of Champions for his first Saturday night win and took home $2400.  It wasn’t, however, his first win at the track. Mahaney’s first win at Fonda came on April 7, 2012 in the season opener, Ice Jam event.  He was behind the wheel of his family owned Woodside Farms No. 21.  He repeated again that same year on September 23 in a Jack Johnson tribute race that paid $12,000 to win for 112 laps.  His next win came in the Buzz Chew No. 88 on August 2, 2017 in the 50-lap, $5000 to win event called “The Jack.”  Fast Forward to 2021 and Mahaney announced that he would call Fonda Speedway his  Saturday night home behind the wheel of the George Huttig owned, Adirondack Auto, No. 35. 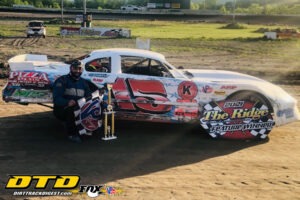 Glen Ridge finally got a full night of racing in on Sunday plus the two events that were postponed from the week prior after the rains came.  Beau Ballard of Grand Gorge, took home the trophy for the win in the prior week main event in Pro Stocks.  Zach Buff was the winner in the rained out Limited Sportsman. 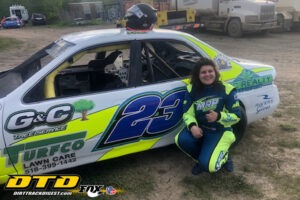 We spoke with one of the newer competitors at Glen Ridge, Gina Voris who got her start in Four Cylinders last season, a season that saw her record her first win at the track.  On Sunday Gina was celebrating her graduation from Schenectady County Community College where she majored in Criminal Justice.  Gina’s car this year is a beautifully painted racer thanks to the Four Amigos and loaded with sponsors because Gina’s dad says “I’m not a mechanic but I do now sponsorship, so I do what I do well and depend on many others for help.”  Sponsors on the car are CYC Realty Management; Martin, Harding & Mazzotti, LLP; Rivers Casino & Resort, Schenectady; Collar City Auctions Realty & Management, Inc.; Turfco Lawn Care; Broadway Used Tires of Schenectady and GC Trees. 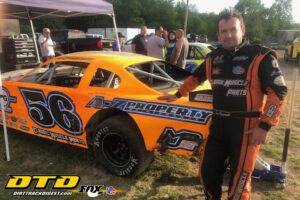 We spoke with Jay Fitzgerald at Glen Ridge on Sunday. Jay had a night to remember at Lebanon Valley on Saturday.  After damaging his car the week before he came back and won the Pro Stock feature.

Jay has been around racing for several years and in that time has amassed 32 victories, predominately at Devil’s Bowl and Albany Saratoga in Street Stocks making Saturday nights win in Pro Stocks a special one for Jay who is a true diplomat for our sport.  Jay said after the win on Saturday he got a phone call from Rob Yetman who he admires.  Rob’s message to Jay was, “You’re on top of your game tonight.”  The message meant a lot to Jay because he considers Rob one of the best at The Valley.

Memorial Weekend is next on our racing schedule and it’s always special so until next week please send all news and/or comments to biittig@yahoo.com