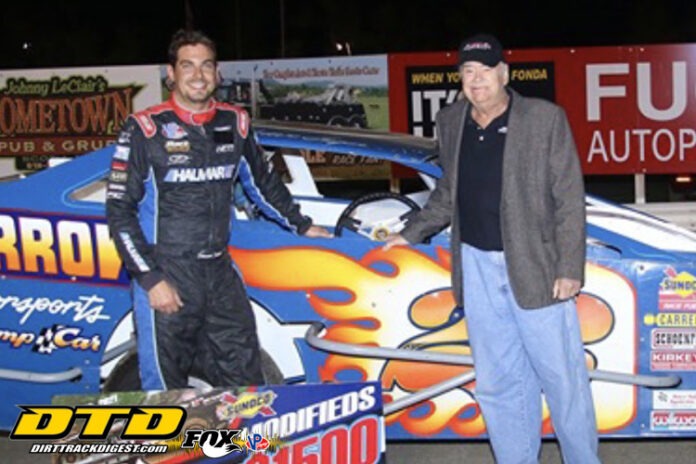 Before we get into this weeks effort, we want to thank Denise Markle for her post on Facebook referring to Stanley Wetmore and Mert Hulbert as “Ridge Runners” because we called them Oak Hill Boys in our column and when we saw her post we realized our mistake.  I t was clearly just a senior moment or something that caused us to just forget the nickname for the group of racers hailing from Oak Hill, N.Y. 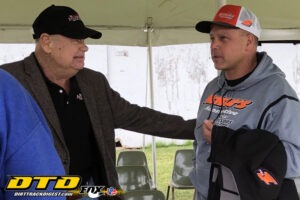 Dave Lape Tribute Night at Fonda was one for the veteran fans to enjoy and for the new fans to take note of one of the icons of Fonda Speedway.  A Dave Lape, “This is Your Life” ceremony was held under a tent outside the Fonda Speedway Hall of Fame & Museum.

A list of dirt racing who’s who showed up to honor the driver of the No. 22 from Canajoharie, N. Y. including founder of DIRT Motorsports, Glenn Donnelly, who came from his home in Florida, Shane Andrews, hosted a video tribute from fellow competitors, Lew Boyd, Dick Berggren, Adam Fusco, son of Lape’s long time friend and partner in LAPCO productions, Andy, Jim Senzio partner in ChampCar, and former Lape crew members, business partners and friends.

Dave Lape was known as a real ambassador of the sport as a driver, chassis builder and promoter, he has done it all.  He has passed his dedication to the sport on to his daughter, Jessica who along with her husband, Peter currently oversee the activities at the museum and each week have it open for the fans to enjoy prior to racing on Saturday nights. 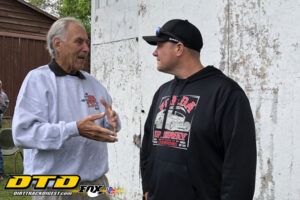 One conversation that had many wondering was this one between, Brett Deyo founder of the Short Track Super Series and Glenn Donnelly, founder of Dirt Motorsports.  We can only speculate.

Another conversation that took place was when Ronnie Johnson took time out his busy schedule on race night to pay tribute to one of his father’s ardent rivals back in the day. Ronnie returned home to Fonda this season and Dave made note of that.

Thursday Ed made his way to Orange County Fair Speedway in Middletown, N.Y. for one event in the 12-race Modified series to decide the 2021 Modified champion.  The format was set to run two 25-lap heat races, qualifying 10 cars from each with a heads up start for the 75-lap feature.  So far there has been two of these series races and Matt Sheppard and Tommy Meier each have a spot.  On Thursday, Stewart Friesen took one more spot with his win from the pole position by luck of the draw. 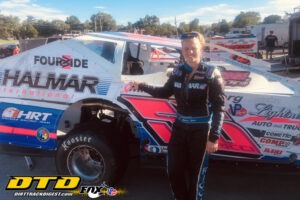 In the pits he spoke with Allison Ricci, who drivers the Halmar sponsored No. 55 and she said she is happy with her season so far.  She almost had a win a couple weeks ago but had to settle for second because of being passed on the final lap.  She gets frustrated sometimes but still loves racing.

Ed spoke with Billy Decker, who is having some great runs this season, and says he only needs a better starting spot and also says he just likes to see the show move along for the benefit of the drivers and fans. 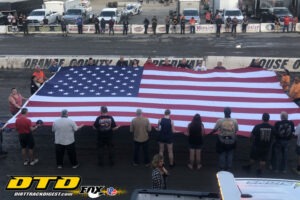 Starting the show on Thursday at OCFS, all veterans and healthcare workers were called to the front stretch for the unfolding of a giant American flag, it was one beautiful site as we snapped this photo from the flag stand.  It was a great start to the Memorial Day Weekend and put special meaning on the singing of the National Anthem.

Although rain plagued most of the weekend and Lebanon Valley cancelled Saturday night’s events, they did get in the first of two Mr. Dirt Track, USA events on Monday, Modifieds, Sportsman and Pro Stocks were on the card.  It was our first visit to the high banks. 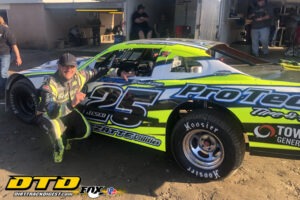 We stopped at the pit area of Chad Jeseo where we didn’t find the plain white car we saw him in at Malta but, the same car painted up and car show ready.   We spoke with Chad about his racing and he said, after trying all the divisions at The Valley, Pro Stocks is where I want to race. 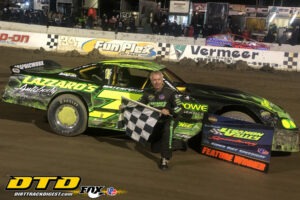 We had heard from other competitors that Chad has been making a difference, at The Valley, in the Pro Stock purse.  What he did was go out and obtained sponsorship totaling enough money to pay an extra $500 to the winner of 11 Pro Stock events for the 2021 season.  Chad handles the bonus payout personally.  We’ve heard many times, complaints that the purse is not enough, well, Chad decided to do something about it.  Pro Stock winner on Monday was Rob Yetman, who hadn’t had a win at the track since 2019.  The win gave him a total 58 wins on the high banks.

Modifieds numbered 47 on Monday and for many of the drivers it was a rare occasion to race on the “high banks”.  We spoke with Mat Williamson, the 2019 DIRTcar Series Champion.  He had just won the DIRTcar Series event the night before at Weedsport.  We had recently looked up Mat’s career win record; he thanked us and also guided us to where we could find two that we missed.  We appreciate the kind words from this talented Canadian driver.  On Monday Mat had to settle for second to one of the other winning drivers on the circuit, Matt Sheppard.  Monday’s event paid the winner, $13,500.  Coming on September 4 is the second Mr. Dirt Track, USA event at Lebanon Valley paying $25,500.

Of course there was the Indy 500 on Sunday and it was one of the better ones in recent years with Helio Castroneves of Brazil winning for his fourth time putting him alongside the likes of A. J. Foyt, Rick Mears, and Al Unser, only three other drivers that have won the event four times.

Also on Sunday, from Charlotte Motor Speedway in North Carolina ran the Coca Cola 600 with Kyle Larson taking the checkesr, giving the Rick Hendrick team a record total of 269 wins in NASCAR’s highest level of racing, replacing Petty Enterprises, who held the title for 61 years.

In closing we send our condolences to Jim and Jason Becker and family on the passing of their grandmother, Marjorie this past week.  Also our condolences go out to the family of Jerry Townley, former driver in the 1960’s and one of the founders of North East Stock Car Old Timers (NESCOT).