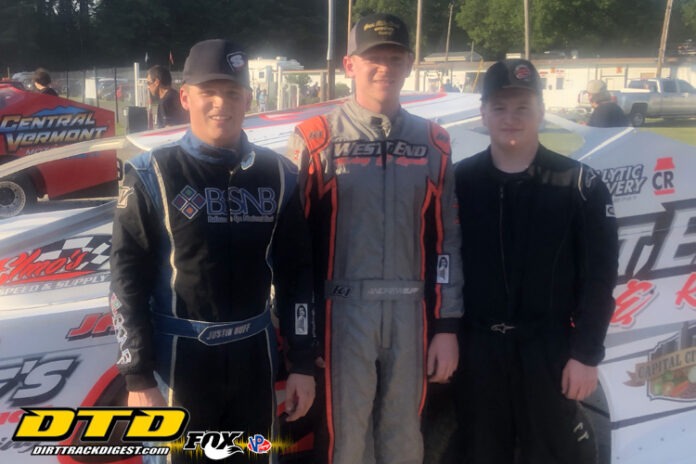 The Buff family is doing all they can to maintain and get race ready, two Sportsman cars to race at area ovals. Drivers, Andrew, 23; Justin, 22 and Zach, 19 all compete on Friday at Albany Saratoga, Andrew and Justin in 602 Crate Sportsman and Zach in Limited Sportsman.  Although brothers don’t always agree these three agree on one thing, it’s a lot of work keeping two cars going, work nearly every night in the shop and their dad, Kevin is there to oversee everything and to try and keep it all going financially.

Most will recognize Kevin as a former driver in the IMCA division for several years at local tracks with a win total of 22 at three different tracks.  He says, because he has grown boys he lets them do the racing.  There are two more boys waiting in the wings so they actually could field a heat of their own, providing they had the equipment.  The Buff boys have a few wins under their belts at several track from the Capital District of New York to North Florida.  Andrews has been racing the longest and has the most wins, 20 in all at five different tracks, Albany-Saratoga, Glen Ridge, Orange County, Lake View in South Carolina and North Florida. Andrew was also Co-Champion with Travis Green at Glen Ridge in 2020.  Justin has four wins, all at Albany Saratoga and Zach has five wins total at Albany-Saratoga and Glen Ridge. 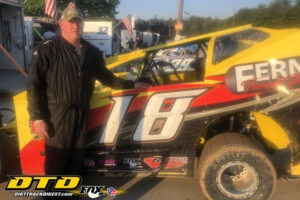 Watching one of the 602 Sportsman heats on Friday we noticed a group near the pits stands cheering on the No. 18 of Jeff Washburn.  We spoke with Jeff after the event and found he has been racing for nearly 20 years, much of it in Pro Stocks.  Jeff said, “It’s a tough division, there are so many great competitors.”  Jeff has four wins in the Pro Stock division before moving up to the Sportsman.  On Friday he came home in fifth place at Malta in another tough competitive division at the track.  Jeff plans on racing regularly at Albany Saratoga and hopes to travel to Airborne on occasion. 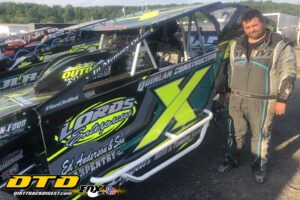 At Fonda on Saturday, E.J. McAuliffe was getting ready to take on the Modfieds.  McAuliffe is a seven time winner in the Limited Sportsman division and champion in 2019.  When his crate engine blew he said he took a week off and decided rather than put his money in a new crate engine he thought maybe it was time for him to move up to Modifieds.  He bought an engine from Dave Constantino of DKM and decided to give it a try.  So he and his crew were busy getting his No. X Modified ready for qualifying and E.J. said he hoped to make the feature and get some valuable track time with the Modified drivers.  Once he had run his heat he knew it was over for the night for him, he lost the motor and because he was qualified for the Modified feature he borrowed the No. 50 Sportsman of Bill August and took a few laps in the feature. 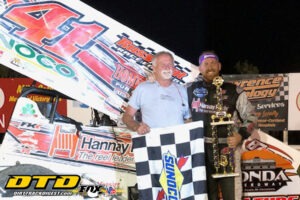 The CRSA sprints were at Fonda on Saturday and standing in victory lane for the first time at the Track of Champions celebrating with his father, was Josh Flint.  Josh is the son of Russ Flint a longtime competitor at Fonda and the 1987 Champion in the 320 Modified with one win to his credit. 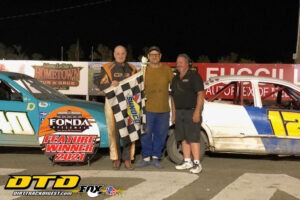 Ken and Kerrie Hollenbeck have been part of the racing landscape at Fonda for several years, Ken on a regular basis the past few years and Kerrie took time off for several years, returning this season to race in the Four Cylinder division weekly.  On Saturday the brothers from Sloansville both stood in victory lane with the checker flag, Ken winning in single cam and Kerrie in dual cam.  Ken sits atop the all time win list in the division with 61 wins and Kerrie sits second with 18.

Hoping for good weather this weekend so until next week please send all news and/or comments to biittig@yahoo.com