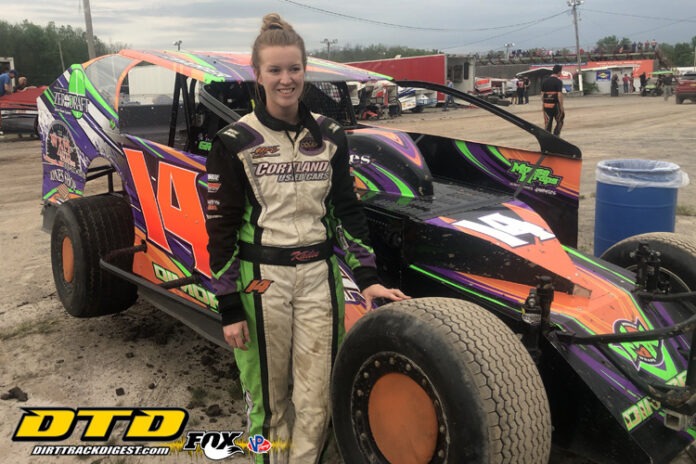 Friday we made our second trip to Utica-Rome Speedway.  The concessions are being managed by Denise Page, who also runs the Fonda concession team so you can be assured that you can eat at the track if you go right after work on Friday.

As we entered the pits we saw Kailee Dimorier and her great looking No. 14 Modified.  It’s quite a trip for Kailee from her home in Austinville, Pa., about three hours from where her car is housed at her Dad’s near McGraw.  Last year when Kailee came to Fonda to race we looked at her racing record over 10 years.  We found she has tried her hand at a few different divisions before landing in the Modified; she drove Excell 600cc Mods, Rookie Sportsman, and Crate Sportsman.  She has proven she is up to the challenge having raced at 12 different tracks and this past weekend at Utica-Rome and Fonda she finished, 14th and 16th.  She is not one of the fully addicted racers and races when she can or when she wants to. 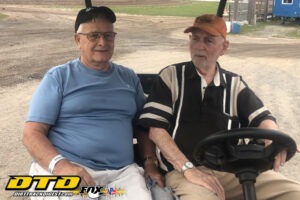 One great part of walking through the pits at any track is finding those people you may not have seen for some time.  On Friday night at Utica-Rome we ran into and got this shot of two gentlemen that have something in common and of all things, it’s that the both managed to go up and over the wall at Lebanon Valley.  Former driver and promoter, Gene Cole did it in 1958 and former driver, Billy Northrup did it in 1967, and Ed was in the stands when it happened.  Billy recalled it like it was yesterday.  He said he was having a problem with his car during the heat and had to race the consi that included nearly 26 cars.  He said as he came from last to second and was about to pass Dick Hansen, the accelerator stuck, and he cleared the five foot fence and ended up landing some 20 feet on the outside of the track, destroying his racecar. 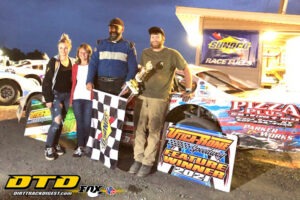 Beau Ballard of Grand Gorge had a good night as some bad luck turned Nick Stone’s stellar run in the Pro Stock feature into a win for Ballard and a fifth place finish for Stone.  On the white flag lap the two were running side by side when a lap car spun out in front of Stone and collected him as Ballard continued on to take the checker.

The Compani name has been a fixture in local racing for many years.  Ron and Ralph ran Fonda Speedway and also Utica Rome.  Along the way race fans also met other members of the family.

One of the last remaining members of the Compani family still connected to local racing is Julie Compani who has been a 50/50 seller at Fonda, Utica-Rome and Super DIRT Week for nearly 30 years.  She says her home track is Fonda where she has been since she was two- years-old.  She enjoys what she does and is very happy to be a part of the team that has raised thousands of dollars for the drivers’ point funds and for that lucky fan that gets to take home the large winnings.  At one time Julie was in charge of the 50/50 at Fonda. 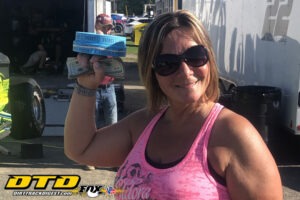 ulie Compani is one of the smiling faces of the 50/50 sellers at Fonda and we thank her and the entire team for their efforts.  It’s great that Julie is keeping the Compani name alive at the Track of Champions. 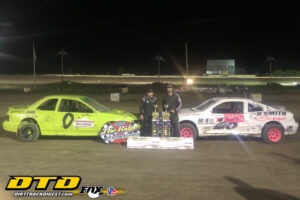 Glen Ridge ran a special event for Four Cylinders on Sunday, the Steve “Fluffy” McMurray Mini Stock Memorial for Single and Dual Cam paying $1111.89 to the single and dual cam winner.  At the end of the 31-lap event for Single Cam, Kaleb Shepard took home the big money.   The Dual Cam feature was won by Mike Travis who was also awarded the $1111.89.  Other money was distributed throughout the field of both events. All the money was collected through donations from fans and supporters of racing at The Ridge.

We spoke with second year Pro Stock racer, Ken Griffin at Glen Ridge on Sunday as he stood next to his beautiful No. 25Y.  Ken is 42-years-old, and up until two years ago, 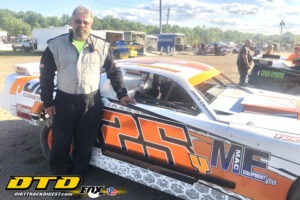 had never raced anything but was involved in racing as a member of the safety crews at Fonda and Glen Ridge.  Ken says he couldn’t afford a Modified and thought he might have a better chance qualifying in the Pro Stock division where there are fewer cars than in the Crate Sportsman.  He loves racing at Glen Ridge and we think that Ken can be proud of what he has done so far.  We wish him well in his racing career.