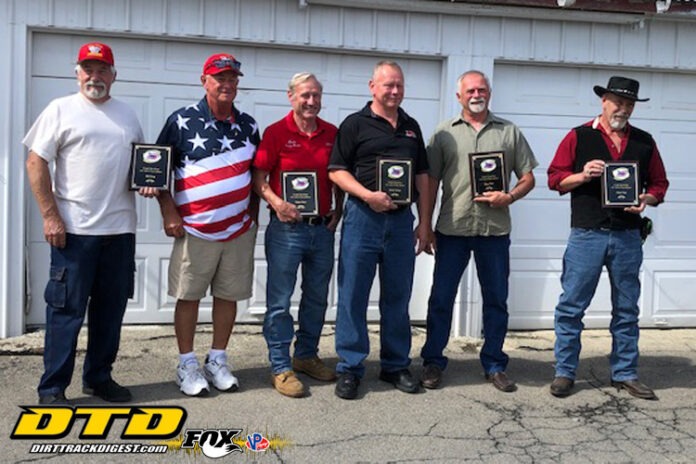 Although rain washed out the racing at Fonda on Saturday, the Hall of Fame inductions at the Fonda Speedway Museum went off almost as planned.  There was one hiccup, the ceremony was moved to Scott Hall on the fairgrounds due to an electrical issue in the museum building. It was one of the largest crowds on hand to celebrate those being inducted. 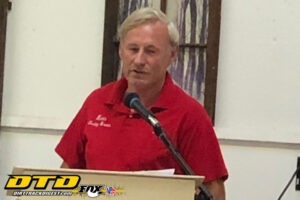 Inductee Phlan Hart brought one of the largest contingents with him and that was no surprise because Phlan was one of the most well liked and popular drivers at the “Track of Champions” and was dubbed “Mr. Nice Guy” because of his willingness to help everyone and anyone.

He first came to Fonda as a fan and was awestruck by the likes of Shoemaker, Petty, Lazzaro and his favorite, Ray Dalmata.  Phlan tried his talent at driving for the first time in 1986 behind the wheel of a Street Stock.  It was 2002 when he ran his last race, because as he put it, I wasn’t having fun anymore.  Over his career Phlan Hart recorded 25 wins at Fonda and was Street Stock Champion in 1995.  During his career he had wins on the DIRT Tour and promoted Fonda Speedway where ever he raced.

In 1980, David Town won the first race he ever entered, a Street Stock event at Chariot Park, a small track promoted at the time by Fonda promoter Jim Gage, Jr., and from then on the 17 year-old was hooked.  He was often described as a dedicated, tenacious competitor and from those that knew him in his race shop, was meticulous in the preparation of his cars.  Towns recorded 13 wins in Street Stocks prior to stepping into 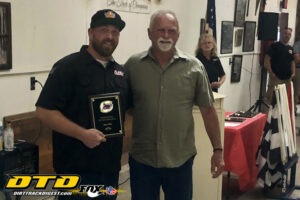 Sportsman where with 45 wins, he sits second on the Sportsman all time win list,  to Alton Palmer.  He has four consecutive Sportsman championships to his credit, at Fonda, 2007-2010.  David Towns also had success at other dirt tracks during his career but Fonda remained his Saturday night home.


Russ Flint is still involved in racing today, dedicated to helping his son, Josh with his Sprint car career.  Flint came to Fonda from his home in Cherry Valley where he and his five brothers built their own cars, in their father’s race shop, like many teams of the time.  It was a family affair for the Flints and although not a multi-time winner, Russ was a fierce competitor and consistent and in 1987 their dedication and Russ’s consistency paid off when he won the 320 Modified championship with one win and five top fives. 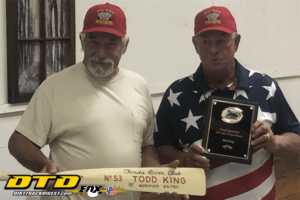 The “voice of Fonda Speedway,” Jim King made the trip to Fonda from Florida with his brother, Todd to induct their father, Bill as one of Fonda’s early car owners. Bill King owned many cars, that sported many different numbers and had many different drivers.  Bill passed his passion for racing on to his sons, Jim and Todd, Jim wound up behind the mic and Todd behind the wheel.  Todd was one of the early members of the Fonda River Club.  Jim and Todd even brought an inscribed wooden paddle and framed photos to donated to the museum.

The Track Contributor award went to Chris Fain one of the most popular chassis builders for the Pro Stock division in the Northeast in the 1980s and 90s.  Among the many drivers that drove a Fain chassis to victory lane, “Krazy” Kenny Martin made it famous and on Saturday, Kenny made the trip from Charlotte, N.C., to inducted his friend, Chris Fain, into the Fonda Speedway Hall of Fame.

“Chris built all his chassis’ the same for everyone, said Martin, no matter who you were,” Martin said.  “Chris Fain was never one for the limelight, but I took care of that for him.”

There was even a secret club, of sorts, that you belonged to if you won in a Fain chassis.  Chris Fain expressed his appreciation to the drivers that won in his chassis by bringing a box of animal crackers to victory lane for every celebration.  “That was just who he was,” said Martin and another former Fain chassis owner and winner, Dave Viall, when we spoke to them after the ceremony.

The Fifth Annual Bruce Dostal Dedication to the Fonda Speedway Museum award honored Adam Fusco, son of the late, Andy Fusco who co-wrote the book on the Track of Champions with Lew Boyd.  Adam has come on board as the museum’s legal counsel and is working to secure official N.Y.S. not-for-profit status for the organization making it eligible to apply for grants from the state government to aid in the expansion of the facility.  Adam is part of the next generation of dedicated volunteers that are working to keep the history of Fonda Speedway alive for future generations. 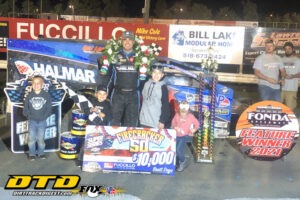 Sunday the weather turned beautiful and the 40 Modifieds and 49 Crate 602 Sportsman who came to race in the Fuccillo Auto Plaza of Nelliston Firecracker 50 and accompanying 25-lap $2000 to win Sportsman event played out before a “Huuuuuge” crowd.  Stewart Friesen made it his third consecutive win in the Firecracker 50 and Cody Clark took home $2000 for his first win in the Crate Sportsman Independence Day event. 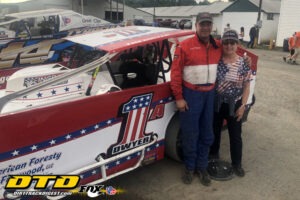 Tim Dwyer was one of the 49 Crate 602 Sportsman who came on Sunday.  A Fonda Sportsman winner with 11 wins, Tim took several years off from racing before returning a couple years ago.  He says he is very happy he made the decision to come back because he’s really having fun.  This year he owns his own team and plans are in the works to up the game for next season with a new crate engine.  Tim also has seven Modified wins and was 358 Modified Champion at Fonda in 1995.