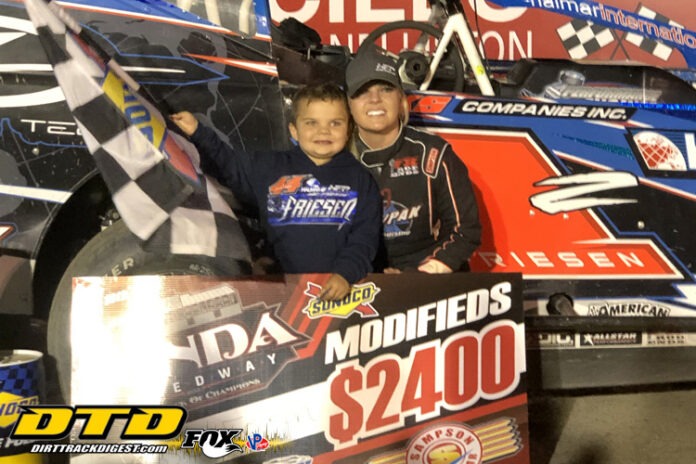 Our racing was limited this past weekend but we got to celebrate two birthdays, one with a surprise party for our daughter-in-law, Julie who turns fifty later this month and the other for our grand-daughter, Lila who became an official teenager on Sunday.  Big occasions for two special family members.

We did make it to Fonda late on Saturday, but not too late to see Luke Horning win his first ever Hondo Classic event and to put the icing on the cake, we saw Jessica Friesen win her first ever Modified event at the Track of Champions.  It was one for the record books because it was the first time a female won a Modified race in Fonda Speedway history.

Saturday night turned out to be a successful one for women in racing in NYS.  A little over 100 miles away, Allison Sload picked up the win in the rescheduled Twin 35 Super Modified main event on the asphalt at Oswego Speedway.  It was Sload’s second win at the track; On May 26, 2019, Sload became the first female to win a Super Modified main-event in Oswego history.

Because of our senior citizen status in racing we remember Jessica Zemken Friesen when she raced at Dodge City Speedway go-kart track in Cobleskill.  It was right around the time we began covering local auto racing for the local paper and one of our stops locally was to see the go-karts race at Dodge City.  By watching JZ at the age of eight, we knew she was dedicated to the sport.  On one occasion, she had broken her foot and the following week was trying to persuade officials to let her race.  Before she left kart racing she amassed over 100 wins, recorded five track titles between two tracks, Dodge City and Caroga Creek.  Since her go-kart days JZ has made it her goal to forge a path for women in racing.

She began racing open wheel dirt Modifies in 2000 and by 2003 sat in victory lane on 6/29/03 at Utica Rome Speedway in the Sportsman Super DIRT Series tour.  She went on to win at Afton Speedway on 7/25/03.  That same year she became the first female to every qualify for a feature event at the New York State Fairgrounds in the 358 Modified event during Super DIRT Week.

Jessica branched out and tried her hand at racing Sprint cars with the Empire Super Sprints and on 5/27/2006 she recorded her first win at CanAm Speedway in LaFargeville.

Jessica Zemken Friesen has accomplished many milestones at many different tracks throughout the US and Canada and also won many awards all while becoming a wife to Stewart and amazing mother to Parker both who were in victory lane on Saturday night to celebrate with her. 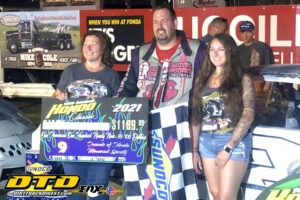 The Hondo Classic is named for Hondo Carpenter, a popular competitor in the Pro Stock division at the Fonda Speedway who lost his life in an ATV accident on July 4, 2005.

Since Hondo’s death, Kelley Keefe and more recently her daughter, Kaitlyn have put together a yearly event for Pro Stock racers at Fonda to honor his memory.  Supporters contribute bonus money, lap money and money for heat race winners, there is event money awarded to the first competitor out of the event, the winning pit crew and the first competitor in line for warm ups.  And there is always an annual tee shirt. 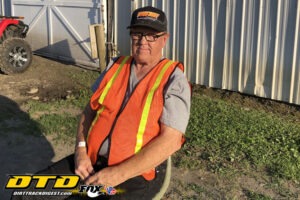 If you are among the many who pass through the pit gate at Fonda then you are familiar with the gate keeper, Wendell Allen.  Wendell has been working in a variety of capacities at Fonda since Ric Lucia tapped him to watch for cars trying to escape the cost of entry by slipping through the horse show gate on Saturday nights.

Wendell has been coming to Fonda on Saturday nights since the 1960s when he hung around the Bill King garage and came to Fonda with that crew.  He has owned and drove race cars, a Late Model in the 1970s and a Modified too.  He says that’s when racing was fun and you didn’t have to rob a bank (figure of speech) every week to afford it or use a computer to figure out problems.  Wendell is a old fashion guy who speaks his mind and is proud of his connection to the Track of Champions.

As the racing season progresses our hope is for all to stay safe and healthy so we can enjoy our friends and racing.