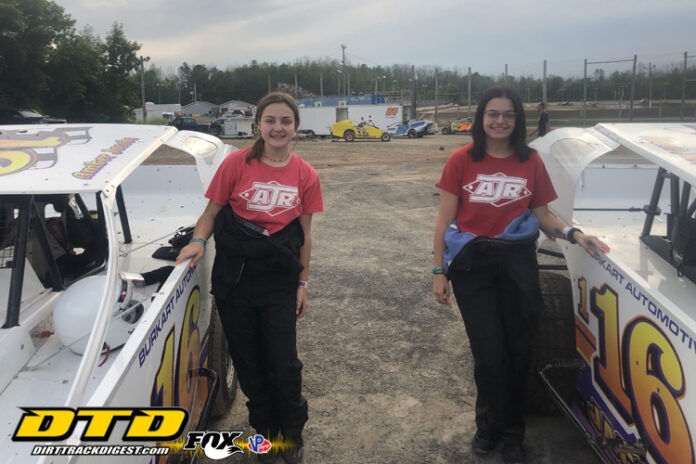 Our rainy season continues. Friday most shows got in and Saturday was a loss for all local racing.

With Fonda’s rainout this past Saturday, Fan Appreciation Night moves to August 7. This Saturday at Fonda is Lou Lazzaro Memorial Night and also a Thunder on the Thruway Series; for Modifieds, 44 laps paying $4,444 to win plus special awards and bonuses.  Crate Sportsman run 25 laps for $1500 and Pro Stocks will run 20 laps for $1000.  Also on the card is the Limited Sportsman and Four Cylinders. 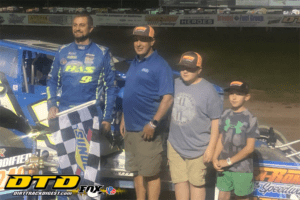 Friday we were guests of Gene and Gloria Cole in one of the sponsor towers at Utica Rome Speedway; their son, Tom sponsored the evening events.  There were 102 competitors on hand including a 28 car Modified field that made for great racing. The Modified competitors came on Friday to get track time for the “Richie Evans Remembered 61” event this Thursday, July 22nd, which is also a Short Track Super Series event.  The race remembers one of the greats of Utica-Rome Speedway, as Richie Evans was a 33-time winner is his iconic orange No. 61 at the track and was inducted into the NASCAR Hall of Fame in 2011.  Because of this event, Utica-Rome will not run on Friday July 23.

In the pits on Friday we saw a young lady checking line ups at the pit shack.  Amber Jacobs is 15-years old and in 11th grade and at Utica-Rome she drivers the No. 16 Limited Sportsman in her second year, with a limited start in 2020.

Sitting alongside Ambers car, was the No. 116 Limited Sportsman of her sister, Alexis, 18-years-old who has been racing for four years.  Alexis’s biggest accomplishment so far is her win in Limited Sportsman at CanAm Speedway on June 1, 2019.

Next to both cars, sat the No. 16 of their Dad, Aaron Jacobs making racing a truly family affair for the Jacobs family of Schuyler, NY.  And they get all they can out of racing and being together at the track.  Sportsmanship at tracks come in different forms, and on Friday even though, Aaron was to start on the pole of his heat, he chose to drop back because he knew he didn’t have the power to stay up front and didn’t want to cause a problem. 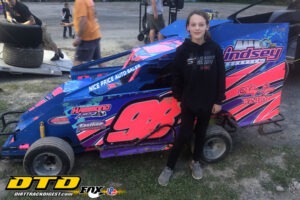 If you’re wondering how this family became so involved in racing you need to go back to the 1980’s when Aaron’s dad, Mike started racing in the No. 44J.  They all grew up with racing and are enjoying their time together.

The longer we follow the sport the more we notice the young age of drivers and on Friday we came across, ten year old, Savannah Simmons who drivers the No. 98 JR Slingshot.  The No. 98 painted up much like the Modified No. 98 that Rocky Warner drivers on the road and it’s because Savannah’s dad owns the No. 98 Modified.  Savannah has raced at Glen Ridge twice this season and says it’s a long trip from her home in Oswego.  On Friday, Savannah finished third at Utica-Rome. 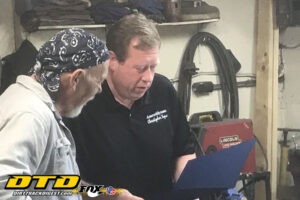 Before making his way into public service, Assemblyman, Chris Tague of Schoharie enjoyed racing in one of Chris Fain’s famous HRD Chassis.  This week, Assemblyman Tague presented a New York State Assembly citation to Mr. Fain acknowledging his part in bringing dirt track racing in New York to a new level and his induction into the Fonda Speedway Hall of Fame.  “Chris has made a mark on the lives of everyone that’s raced in his stock cars, including me, said Tague. It was a real, personal honor to present this citation to such a talented friend and family man.”

Within the past few weeks we have watched Jessica Friesen become the first female to win in the Modified division, both at Fonda and Utica Rome.  Victory lane is not new to Jessica. Since staring her career in open wheel cars and sprints she has a total of 27 wins in four different divisions at ten different tracks, including tracks in Canada.

Down the road at Lebanon Valley, Kim Lavoy was in victory lane again this season on the high banks in a 358 Modified bringing her total to four wins.  We mention these two women in our local racing because many try it for a few years, but not many stay.  Kim has been racing for ten years and Jessica for 20.

Hoping for sunny weather, until next week please send all news and/or comments to biittig@yahoo.com