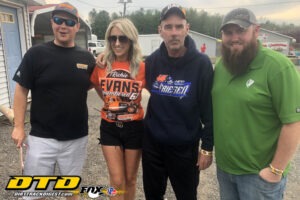 What looked like a four day racing weekend beginning on Thursday, started at Utica-Rome and that’s where it ended for both of us.  Our racing for the remainder of the weekend was enjoyed from our recliners because we both are battling a “summer cold” or some sort of bug that blacked flagged us both.  However, thanks to DTD TV, FloRacing and DIRTvision we didn’t miss a lap.

At Utica-Rome it was the Richie Evans Remembered 61.  The Modified portion of the event was 61-laps paying $6161 to the winner and the stands were full of fans that came to honor the local star that made Rome, N.Y. famous by his racing efforts and successes all over the U.S. 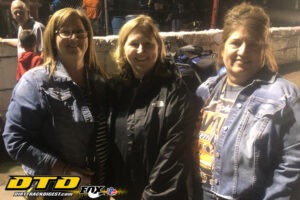 Richie Evans died in a racing accident at Martinsville Speedway in Virginia on October 24, 1985.  Brett Deyo was not quite three years old, but as a young promoter and a race fan himself, he knows the importance of the history and does not forget the pioneers of our sport that made that history.  His ability to put together an event such as Thursday’s is what makes him unique as a promoter.

It was special talking with Richie Evan’s daughters Janelle, Jodi and Jill and they were thrilled to see their dad being remembered in such a special way by so many people after so many years.

Another special event for the evening was the 6-lap “Hot Rod Hodge” Dash honoring Tim Hodge, Sr., and paying $1061 to the winner.  Tim is a race fan but has also worked at Utica-Rome behind the wheel of the water truck.  He is currently battling an aggressive form of cancer.  The Dash was put together by his daughter, Dylanne.  Many are familiar with Dylanne as one of the 50/50 sellers at the track and many other tracks in the area.  She also shows up in victory lane at many of the same tracks. 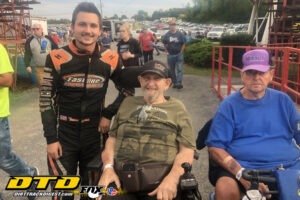 On a night that had so much to do with families, while standing near the flag stand we saw two gentlemen both in wheelchairs near the base of the grandstands enjoying the racing.  As a young man approached they both began to smile.  Addison Bowman drives the No. 12 Crate Sportsman and one of the gentlemen is his grandfather, Fran, known as Fran Redhead.  The other was Sonny Bennett and there was no question who they were their to see. “My grandson, said Fran, he’s the best.”

Because Utica-Rome was where our in person racing ended we enjoyed the rest of the weekend thanks to DTD TV, Flo Racing and DIRTvision.

It was Lou Lazzaro Memorial Night on Saturday at Fonda and the No. 4 was prevalent in victory lane for much of the night.  First it was Stewart Friesen in his familiar No. 44 taking the win in the 44-lap Modified feature and pocketing $4,444.  Cody Clark was in victory lane with his No. 4 after winning the 602 Crate Sportsman main event.  Lou Lazzaro of Utica made the maroon and white No. 4 famous in racing all along the East coast for well over 40 years and drove right up until the time of his death on May 1, 2000.

There was bonus money given throughout the night in all divisions from multiply sponsors making is a special night to remember “The Monk”.

This week at Fonda, July 31, before all the racing action begins, the Autism Awareness Fundraiser Chicken BBQ will be held in the Entertainment Building on the fairgrounds from 2-4 pm.  Tickets are only $10 and available at the One Zee merchandise trailer or by contacting oztonline@yahoo.com.  All proceeds benefit Crossroads Center for Children.  At this late date we are not sure there are tickets left but you can give it a try.

Racing this Saturday presented by Parks Companies and included all divisions plus the CRSA Sprints.  The Pro Stock race is the sixth event in the American Racer/Lias Tire Super Six Series.

With only three weeks left before championship night, Saturdays events certainly tightened up the point standings in the Modified division.   Going into Saturday night, Rocky Warner was leading by only 17 points over Jack Lehner and Rocky had an unfortunate run-in with another car on the first lap that put him into the outside wall and put him out of competition for the night.

After looking at the Modified finish and point structure our unofficial results are: Jack Lehner (623), Rocky Warner (622), Josh Hohenforst (620), Ronnie Johnson (614) and Stewart Friesen (613).  That’s ten points that separate the top five.  Looks like it’s anyone’s game and finishes will be significant the next three weeks. 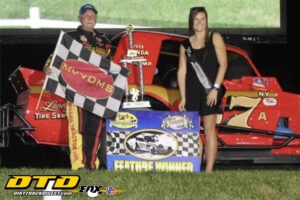 With DIRTVision we watched the Hall of Fame 100 from Weedsport and the Mohawk Valley Vintage Series was there and two local competitors brought home wins, Jack Miller of Schoharie was the winner of the Vintage Modified division and John Roese also of Schoharie won the Vintage Late Model division.

Winner of the DIRTcar Series Hall of Fame 100 at Weedsport on Sunday was, Stewart Friesen of Sprakers followed to the checker by Max McLaughlin and Tim Sears, Jr.