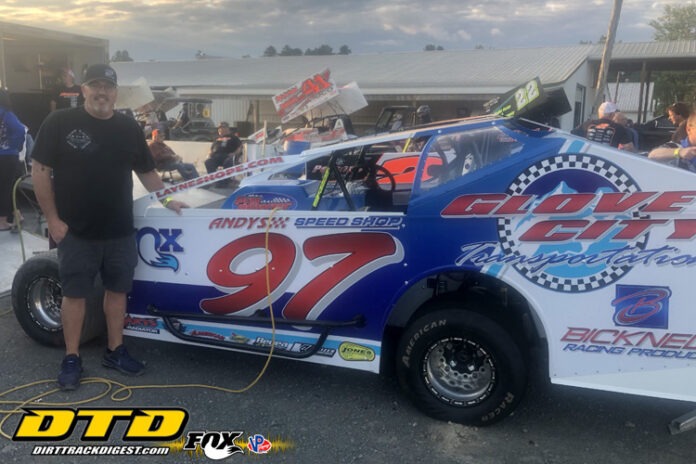 The weather final cooperated and several very exciting happenings occurred in racing this past weekend.

At Fonda on Saturday, Ronnie Johnson returned to victory lane, his first time since 8/20/16 and Tanner Warner stood in victory lane for his first career win.  This season after Ronnie Johnson returned to Fonda to race in a memorial race for his father, he decided that Fonda was where he wanted to race this season, he was home, where he grew up as a kid when his father was dominating the Modified division at the Track of Champions. 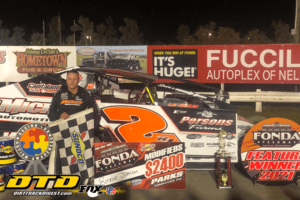 “I feel that I have the best team in dirt track racing,” Johnson told Mimi Lazzaro in victory lane. “There are guys on my team that was with my father on his team before I was even born. There were a lot of late nights spent getting this new car ready this week, we got our small block motor back, dropped it in, and here we are. I have all those guys that have been with me and my father for so long to thank for this win. It feels good to be back home again.”

The night was a big fundraiser for Crossroads Center for Children and at the end of the night a total of $21,405 was raised for Autism Awareness thanks to the huge event organized by Jessica and Stewart Friesen and the work of many volunteers whose energy made it possible to bring the successful night to the track for a second time, the first was 2019.  Due to Covid the event was cancelled in 2020. 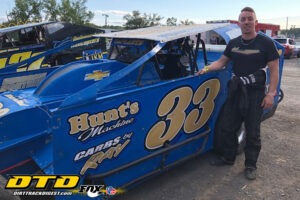 Taylor LaPlante feels at home at Fonda because that’s where his father, Tom ran Street Stocks and tried his hand at Sportsman before giving it up in 2005 when Taylor began his racing career in Slingshots.  Taylor raced at Dodge City and Caroga Creeks tracks until he decided in 2020 that he wanted to try his hand at Limited Sportsman and moved up.  He ran a few events at Glen Ridge before making his debut this season as a Fonda regular and has done very well.  Two wins and five heat race wins.  Taylor plans to try to qualify in the 602 Sportsman event during Fonda 200 weekend and then move to that division for 2022. 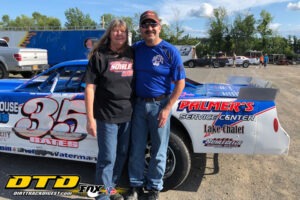 “I raced there many times,” said Gates when we spoke with him at Fonda on Saturday, “but never won.”

In fact Gates said he had never won anywhere else but Fonda where sits at the top of the all time win list with 84 wins.  With Gates on Saturday was Carole Palmer of Palmer Service Center.  The Palmers have been sponsors on Gates’s No. 35 for ten years and were thrilled with his win on Friday and better yet they were there to celebrate. 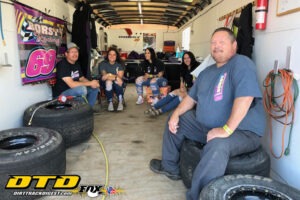 The Brian Borst team sat peacefully enjoying some refreshment on Saturday night before action began.  The team has celebrated a win this season and experienced the downs of racing also but they are still able to enjoy their time together.  When asked about the tire dilemma being experienced by some, Brian said they have plenty of tires, they stocked up at the beginning of the season, so they can relax and not put a tire shortage on their list of concerns. 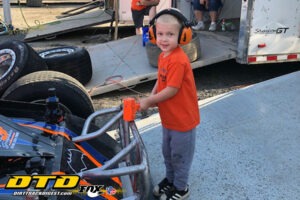 That’s Evan Mortensen, Mark’s son and the newest member of the Mortensen M1 Race Team and at 3-1/2 years old he already has a good idea what needs to be done as a crew member.  In fact we think he has the look and swagger of a crew chief, possibly even a track official.  We expect to see much more of Evan at the races. 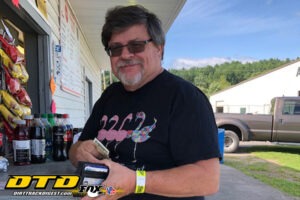 At the concession stand we ran into, Jim Ellis, a soon to be inductee into the Glen Ridge Hall of Fame.  Ellis is well known around local racing as the very competent, pleasant and friendly, reporter that has covered local racing for many years for the Leader Herald.  Jim was recently retired out of the Leader Herald when the paper was bought by the Dailey Gazette in Schenectady.  Jim will now cover Fonda weekly for the Dailey Gazette so we expect to see him regularly.

Rocky Warner brought out a brand new car on Saturday, a Mike Romano throwback No. 97 and it proved to be what the doctor ordered, he finished second in the Modified feature and now leads the points.  Ronnie Johnson also brought out a new car on Saturday and he won and now sits second in points.  Both moves came at the expense of Jack Lehner who lost the one point lead he had going into the night due to a blown engine and now sits fifth. Josh Hohenforst stayed in third, and Friesen is now fourth. These calculations are unofficial.

Friday night at Albany-Saratoga it was Stan Da Man Night in memory of promoter, Lyle Devore’s father, Stan and avid race fan and custom car enthusiast who loved ’32 Fords.  The night’s Modified feature paid $3200 dollars to the winner.  Additionally, the Mod heat races paid $320 to win thanks to Chris Grady of Grady Vintage Racing Photos.  Matt DeLorenzo took home the heat and feature money.  The 602 Sportsman main event paid $1320 to the winner for 32 laps and Tim Hartman, Jr., took that win and the money. 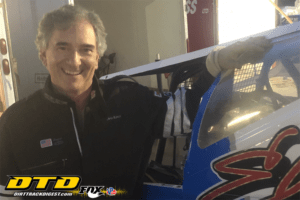 The Ronca Family is one of the mainstays at Albany-Saratoga oval and a few weeks ago the youngest, Rich, found himself back in Modified victory lane.  On Friday night he was still smiling when we talked to him.  The Ronca clan has over 20 wins in a variety of divisions at Malta and the patriarch, Nick Ronca is a member of multiply Hall of Fames.  He is always there to support his sons and share his long time knowledge in their racing efforts.  Albany-Saratoga has had 12 different winners this season in the Modified division, showing how tough it is to win at the Malta oval, so if you are one of the 12 you have earned it. 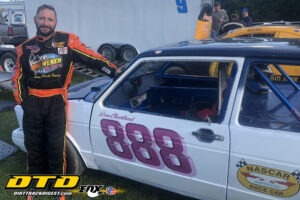 While listening to a special meeting of the Four Cylinder division at Albany-Saratoga we heard mention of a car No. 888.  We found and spoke with the driver, 33-year-old Daniel Jaubert from Warrensburg.  As it turns out the car is a 1974 VW Rabbit formerly owned by the Champ, Rene Charland, who we lost a few years ago.  Noticing Daniel’s accent, we asked where he was from and he said, South Africa.  He has raced in many divisions but says the cost is what has kept him in the Four Cylinders.  Seeing the No. 888 certainly brings back memories for many of us seniors fans.