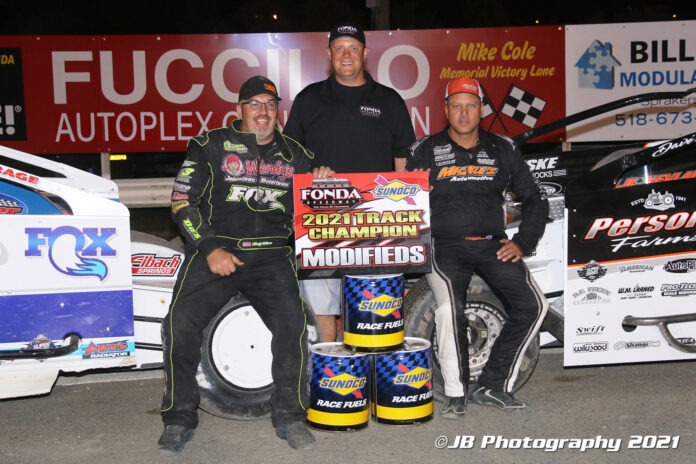 Stewart Friesen of Sprakers recorded his tenth win of the season and his 78th win at the track on Saturday night but he wasn’t the one everyone was watching as the laps wound down in the Modified main event.  All eyes were on the No. 2RJ of Ronnie Johnson of Duanesburg and the No. 97 of Rocky Warner of Gloversville.  The two were locked into a side by side battle lap after lap to claim the 2021 track title in the Modified division. 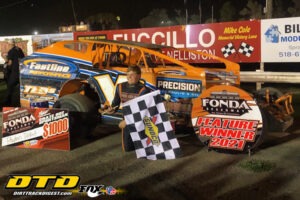 The night began with four drivers within 13 points of the championship and when the night ended Johnson and Warner were crowned Co-Champions and made history at the “Track of Champions”.

Drama was in the air for the four drivers, Rocky Warner, Ronnie Johnson, Josh Hohenforst and Stewart Friesen, separated by only 13 points, and they all seem fairly calm as they prepared for hot laps early in the evening.

The stands were filled with excited fans filled with anticipation of the action that would play out on the track and they were not disappointed.  Putting the icing on the cake it was fan appreciation night, $5.00 admission, Harry Peek Tribute Night, additional money on the line, Kid’s Club backpack give away, Meet and Greet and the 50/50 winner took home $6,134. 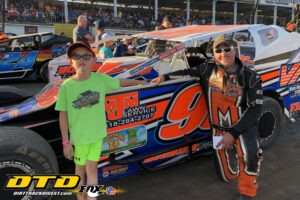 Before the racing started on Saturday night we spoke with the four drivers at the top of the Modified points and in contention for the title.  Josh Hohenforst considered himself the underdog and said his plan was to just race like it was another Saturday night.  He was the only one without a championship so far but he is always in the top five in points. Ronnie Johnson returned to Fonda this season and on the final night found himself four points out of first place.  He knew with a new car and small block motor he was up for the challenge. Ronnie has two Fonda titles to his credit, 2011 and 2016.  Rocky Warner is no stranger to championships at the Track of Champions, he has eight titles in four different divisions, two in Street Stock, one in Pro Stocks, four in 602 Crate Sportsman and one in Modifieds, in 2019.  We asked about his four point lead and he quickly said, “I would much rather have a 40 point lead”.  Stewart Friesen knew it would difficult to finish far enough ahead of the other three to take the title.  Stewart has four titles at Fonda. 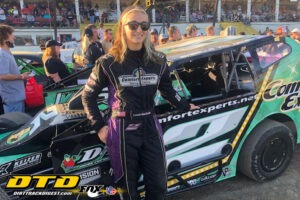 The Meet and Greet at Fonda is always popular and Saturday the track was filled with excited fans and drivers.  One new face in the crowd was Isabella VanOrden who made the trip from her regular Saturday night track, Orange County to race for the first time at the Track of Champions.  Actually, Isabella had never even been to Fonda until Saturday night.  She follows the Short Track Super Series and races OCFS regularly, and has the distinction of being the youngest female to ever win on 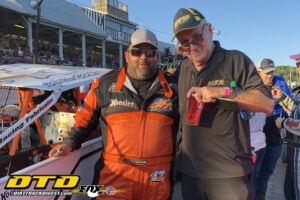 the Hard Clay.  Her win came on May 8, 2021, in the 602 Crate Sportsman.  Prior to racing Sportsman, she raced Slingshots.  Isabella said she races in honor of her mother who was recently diagnosed with cancer. 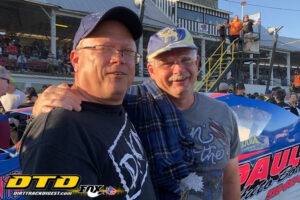 Limited Sportsman driver, Walter Cook was also on the track for Meet and Greet.  It was his second time at Fonda this season.  But Walter did formerly race with the IMCAs when they were running at Fonda during the Lucia/Beberwyk era.

We met many people at the Meet & Greet, former Pro Stock racers, Dave Viall and Rob Noviczski, Michael McCallion with go-kart racer, Colton White, Payton Talbot who was just coming off a recent win at Utica-Rome and then went on to record his first win at Fonda on Saturday night. 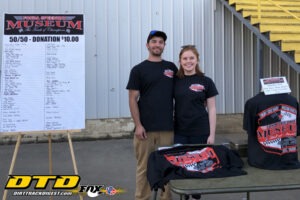 Along the front of the grandstand on Saturday was Fonda Museum curators, Jessica Lape-Schwab and Peter Schwab selling tee shirts and taking donations for the Museum.  We were happy to give a donation and also pick up a couple tee shirts. 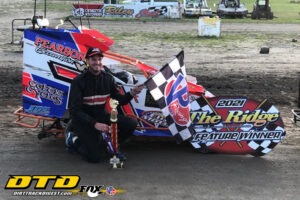 Sunday at Glen Ridge we saw Adam Fusco drive to victory in the Sr. Slingshot main event for the second time this season.  Adam has teamed up with the Duncan family and drives the No. 771. Sunday Adam shared with us how he and his Dad, Andy came to The Ridge to see the Modifieds run weekly.  Adam comes by his love of racing from his Dad who was former DIRT attorney, writer from many outlets, host of This Week on Dirt and Co-Promoter with David Lape in the LAPCO shows.  It’s great to see a Fusco on the track and we’re certain Adam had a fan in heaven.

We made another trip to Dodge City on Friday only to spend a little time in the pits before a nasty thunderstorm ended the night.  When we arrived we ran into three fans that had made the trip all the way from Philadelphia, Brian, Bill and Liz Sarris had never been to Dodge City and because of their connection to the 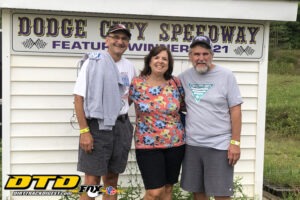 Montenaros they were there to enjoy some go-kart racing and planned to go to Fonda the following night.  Brian and Bill follow the NASCAR races and were connected to Bill Wimble and his annual bus trip to the Daytona 500.  As a matter of fact they took over the organizing of the trip when Bill no longer could and they still run the trip today.