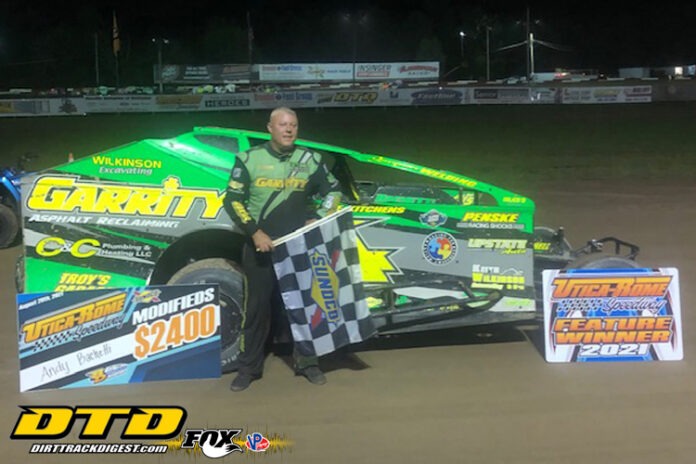 At Utica-Rome on Friday night, Andy Bachetti of Sheffield, Mass.    , took home the win in the Modified main event, his first since 2007.  This year Bachetti has been knocking on the door of a win all season, finishing outside the top five just twice in the 11 events run at the track. All in all a good season at the track for the Wild Child who has four wins at the Vernon oval.

For this season, Bachetti is one of only four drivers in double digits in the win column, eight at Lebanon Valley, one at Selinsgrove and now one at Utica-Rome.  In his career, Andy has won on eleven different ovals.  His career wins of 202 include 94 at Lebanon, 51 at Accord, 21 at Orange County and 19 at Afton plus several others at seven remaining speedways. 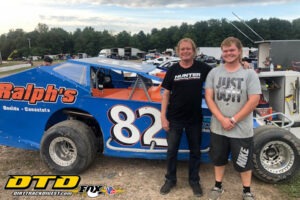 Second generation driver, Ron Holmes has been to victory lane at Utica-Rome in a Modified eight times in four different seasons, his first win on July 30,1995 and his last on July 16, 2000, the same year he was Modified champion.  Before stepping into Modifieds, Ron piloted a Sportsman and won three times in the 1993 season.  Ron raced Pro Stocks/Street Stocks and won seven times in two seasons, 1991 and 1992. He started his racing career in Pure Stocks where he recorded two wins in 1989.  Ron may very well be the only driver to race and win in four different divisions at Utica-Rome.  On Friday we snapped a shot of Ron and his son, John who is just beginning to try his hand at the sport as the third generation driver in the Holmes family.

Ron’s dad, Ralph is part of Fonda’s storied history as the very first driver to qualify for Syracuse and it happened like this; Jack Johnson was the winner of the event but was disqualified for entering the track in the wrong place and Ralph Holmes was declared the winner, the year, 1972. 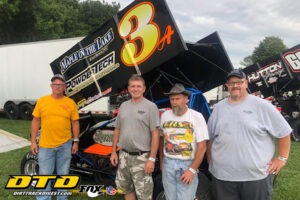 The CRSA Sprints were in action and 23 cars were on hand for competition. Jeff Trombley has raced in many different divisions over the years.  We first knew him when he raced go-karts at Dodge City.  He then moved to the VW Mini Stock division before taking the big step to Modifieds.  Jeff was successful in his Modified, and was a regular at Fonda for many years where he has 35 wins and two Modified championships in 2001 and 2002, four wins at Lebanon Valley, six wins at Albany-Saratoga, one win at Devil’s Bowl. He’s leading the points in CRSA this season where he 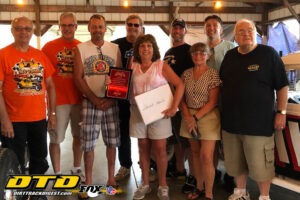 races the Warren Alexson, No. 3A.  Jeff has several wins and championships in CRSA.  After all his time behind the wheel, Jeff Trombley is at a point in his career that he is enjoying what he is doing.  His crew that travels with him are his wife Serena, Warren Alexson, Tom Mallett and Dan Hanson.

Sunday we attended the annual NESCOT Steak Bake and what a great time and meal we had.  And Ed came home with two bags full of collectibles from the raffles. 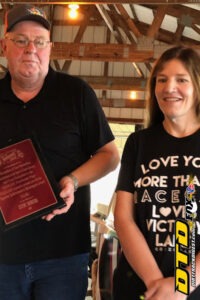 We were scheduled to make a run to Glen Ridge after the NESCOT event but Glen Ridge cancelled their racing and along with it their Hall of Fame inductions.  Those to be inducted in the 2021 class are Jim Ellis, Bobby Varin, Angela Hoard-Hanson, Jake Spraker, Mike Romano, Dan Kingsley, and Dave Joslin.  Glen Ridge is currently looking for a future date for the ceremony to accommodate all recipients.

Sunday was Bobby Varin’s birthday and we decided to surprise him with a cake, but because the Hall of Fame ceremony was postponed we knew we had to deliver it to him on Monday, so off we went to 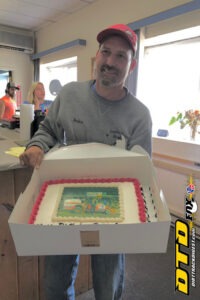 Supply Wagon Rentals in Johnstown where we found him busy but willing to take some time to show us around and pose for this photo.

Until next week please send all news and or comments to biittig@yahoo.com