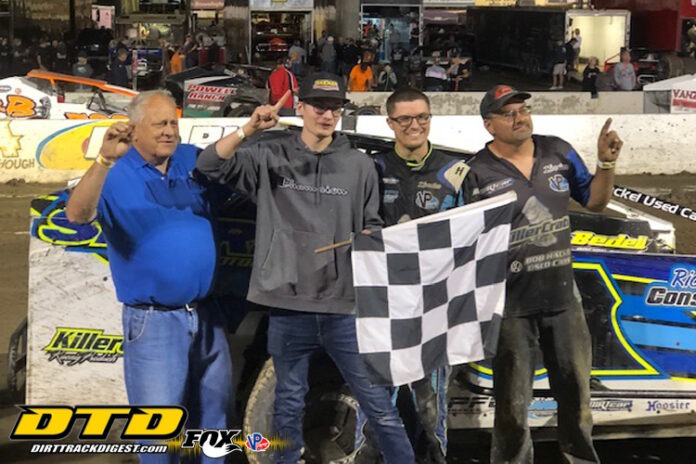 We ventured to Afton on Friday night for what was to be the championship night, however, Mother Nature had different ideas for all those that came to enjoy the racing.  We arrived and made it into the pits before a threatening cloud began to move in on the track and for those who were there, the rest is history.  We sought shelter in the Trombley/Alexson hauler and enjoyed some conversation and refreshments.  Thanks to the team for their hospitality and saving us from getting soaked.  We actually left with very wet feet from the water that inundated the grounds, but because we waited out the heaviest downpour, we didn’t get too wet otherwise.

On Saturday Ed decided to try his luck once again and headed to Lebanon Valley for his second trip to the high banks this season.  Once again, rain threatened but did stop prior to the start of racing. 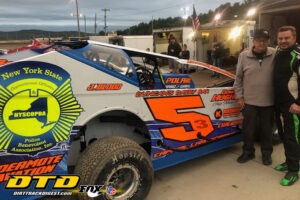 Whitey Slavin is a second generation driver who has a strong connection to the history of the high banks.  His Dad, Win Slavin was a Modified standout who was a real threat when he raced his familiar No. 53 back in the 70’s and 80’s.  Whitey’s No. 5 Sportsman is owned by Dave Goodermote, a long time supported in the sport.  To honor his father Whitey has painted a number three inside the five.  On Saturday he finished fifth in the feature.  Whitey has one win in 2021 making his win total at the track five.  Slavin has had many triumphs on the high banks.  His 2017 Sportsman championship came in the 53rd year of the family racing.  He defended his title in 2018 and took the championship without a win, something that signals consistency.  In 2014 he was the winner of the Future’s Race at Super DIRT Week in Syracuse.

Bobby Hackel, IV recorded his first career Modified win at Lebanon Valley on Saturday and his entire family was there to celebrate with him, Bob Hackel, Jr., Bob Hackel, III and brother, Brett.  Hackel is a fourth generation driver that still has his entire family strongly behind him for support.  His great-grandfather raced jalopies at early area speedways, his grandfather is Bob Hackel, Jr., became famous in the VW mini stock division racing and winning up and down the East Coast.  His father Bobby Hackel, III also raced at area tracks, first in Sportsman and then in Modifieds.  His brother has also tried his hand at racing but does not race on a regular basis. 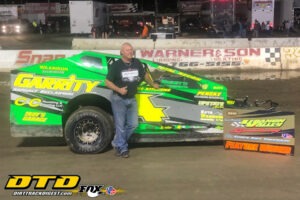 Andy Bachetti was crowned the Modified track champion on Saturday, under a cloud of confusion.  Confusion that transpired because it was announced throughout the night that the champion would be crowned even though the final night of points for the division was on the schedule as September 4 at the second Mr. DIRT Track USA event next Saturday.  The track title for Bachetti is his fourth in big blocks.  He is currently ahead in the small block points by 53 points. 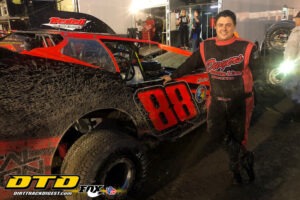 Olden Dwyer is a second generation driver that drives in both big block and small block modified divisions at Lebanon Valley.  The son of Ron Dwyer, Olden has five wins in 358 Mods, the first on 7/26/14 and the most recent on 8/7/21.  He is still looking for his first big block win.

Olden is following the SDS this season and says he loves going to all the different tracks and thinks it’s beneficial getting all the seat time against some of the best drivers in dirt track racing.  The team is on their third big block motor this season but admits the problem is their own fault.  This week Olden will travel with the DIRTcar series to Bloomsburg Fair Raceway in Pennsylvania where he could pick up $10,000 for a win. 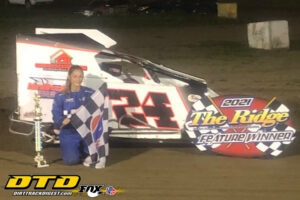 At any given race track many classes make up the show, at Glen Ridge there are seven divisions weekly one being the Northeast Paving & Sealcoat All-Star Slingshots.  On Sunday young Kristen Swartz of St. Johnsville showed her racing prowess when she passed last week’s winner, Adam Fusco and went on to win the Sr. Slingshot main event.  Kristen has been racing Slingshots only a short time and has been to The Ridge on a few occasions.  In talking with her we found that she has been racing go-karts for eight years, she’s 15 now and going into her Junior year of high school.  Her go-kart career has taken her to many different tracks and produced many wins.  Earlier this year she raced karts in North Carolina and Tennessee, winning two events in each state.  She moved to Slingshots this season and already has a win at Caroga Creek.  She plans to race at Dodge City Speedway this Friday for the Dirt Modified Nostalgia Tour Night. 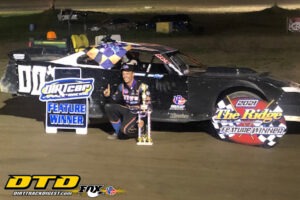 The DIRTcar Pro Stock Series was at Glen Ridge on Sunday and World Racing Group, CEO, Brian Carter was in the field of those vying for the accolades.  It was Josh Coonradt that bested the stellar field of 20 of dirt track’s best Pro Stocks racing 40-laps for the trophy.  Luke Horning and Beau Ballard completed the podium finish.  The competitors raced door to door giving the fans a race to remember.

As we head into the Fall and the final points at many tracks, champions will be crowned and the extra distance events will fill the schedules.

In closing we send our thoughts and prayers to the family of Harvey Fink who died this week at his home in Ocala, Fl.