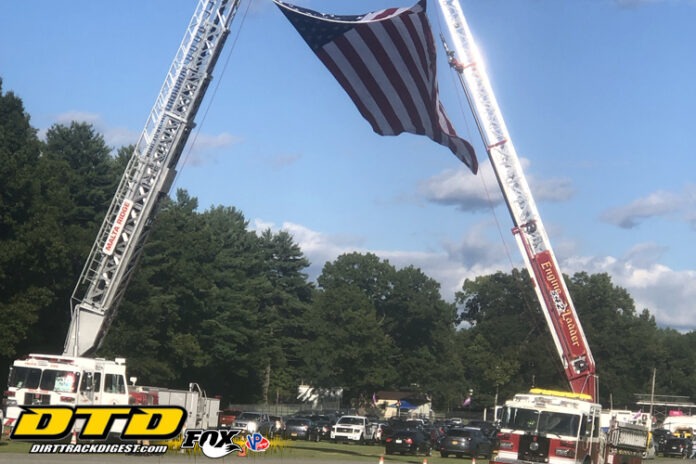 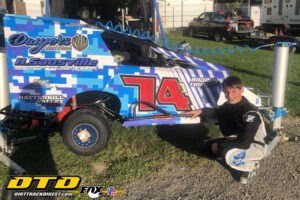 For the past few weeks we’ve been finding Slingshots at many area tracks and on Friday night at Albany-Saratoga we ran into a familiar group of race people we’ve known for many years.  It was the Pierce/LaPine crew with young Jaden Pierce who is the Slingshot racer.  Jaden is the son of former driver, Chad and grandson of car owner and fan the late Edmund “Peanut” Pierce of Vermont.   Jaden is 13-years-old and recently moved up from the go-kart ranks where he had two track titles, one at Lebanon Valley and one at Dodge City along with nine wins.  Jaden and his crew recently traveled to 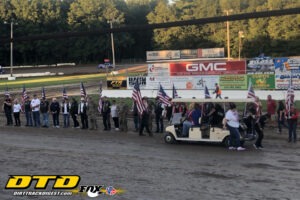 Pennsylvania to race with the Slingshots in a five track series with his highest finish being third.  Jade is currently in eighth grade, enjoys racing and looking forward to his first win in a Slingshot.

On Friday night Albany-Saratoga remembered 9/11 and those lives lost 20 years ago paying tribute to first responders, fire fighters, military families, and others who contributed so much on that day.   A giant flag hung between two aerial ladders on fire trucks as fans entered the track. 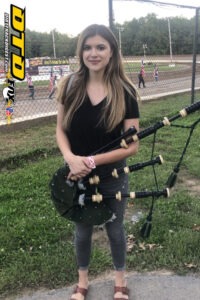 Before the nights racing activities a parade of Street Stocks carrying American and military flags made their way around the race track, stopping on the front stretch for a ceremony to honor all those present and remember those lost.  Ally Crowley Duncan sang the National Anthem and played Amazing Grace on the bagpipes as the group left the track in a solemn parade.  It all was an amazing tribute to begin the 9/11 weekend of remembrance.  We commend Lyle, Marcy and Mia and the Duncans for their efforts and beautiful start to the evening.

As we walked through the pit area at Malta looking over the nearly 130 racers eager to get on the track we came across one beautiful No. 959 Modified with John Lutes Jr., next to it.  John comes from a four generation racing family, the number on his car comes from his grandfather’s racecar.  John’s dad raced local ovals for many years in his familiar No. 21L and John’s brother, Jeff is also a racer.  His daughter, Alissa Cody currently races at area tracks. 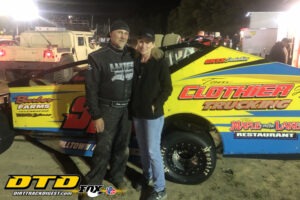 John found victory lane on four occasions in 2015 and 2016 when Glen Ridge ran Modifieds.  On Friday John had one crew member with him, his girlfriend Diana.  In talking with John you can sense how much he wants to be at the track racing even though he knows he’s going into a gunfight with a knife.  He knows he can’t afford one of the $50,000 engines, but he   still loves just being at the track and competing. 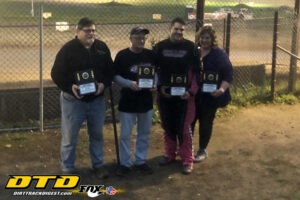 Sunday night Glen Ridge wrapped up their season and unfortunately the racing was cut short due to rain. However, the Hall of Fame inductions went off for those in attendance.  Local driver and car owner the late Dave Joslin was posthumously inducted and his son, Ivan and brother, Dennis were on hand to accept the honor.  Others present were former flagger, Dan Kingsley, former competitor and official, Angela Hoard-Hanson, and sports reporter, Jim Ellis.  Unable to attend were former promoters of the track, Jake Spraker and Mike Romano and the tracks most winning driver, Bobby Varin. 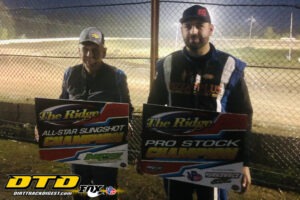 Glen Ridge also crowned its champions and Dan Ballard and his son Beau Ballard of Grand Gorge were crowned champions in their respective divisions, Dan in All Star Slingshots and Beau in the Pro Stocks.  The question came up if a father and son had ever won a track championship in the same year on the same track in two different divisions.  We searched, and put out feelers for info from racing historians and no one could verify that it had ever happen before. 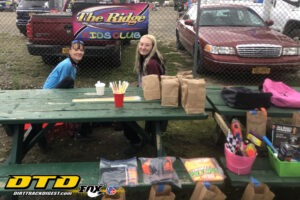 Like many speedways, Glen Ridge has their very own, Kid’s Club, handling the duties each week are Jessica and Faith Brisbane of Glen.  A week ago they gave away 45 backpacks in time for the starting of schools and this week they ran a raffle for all the club members. 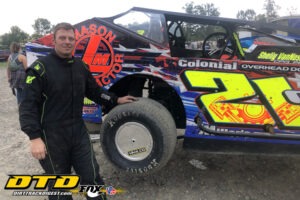 Brian Calabrese races in the Crate Sportsman division at The Ridge.  He says even though he would love to move up to Modified, he knows he can’t afford it.  This seems to be true for many racers in the other divisions.  Are we pricing people out of racing?  Or is this the way it’s always been?

Andy Graves of Middleburgh was the winner of special event featuring Pro Stocks at Brookfield Speedway at the Madison County Fairgrounds this past Saturday.  Graves, a multi-time winner at Glen Ridge, had never won at any other track until his win at Brookfield.

As the season winds down we look forward to all the big events to close out the season.  Hope to see many of you at the races.