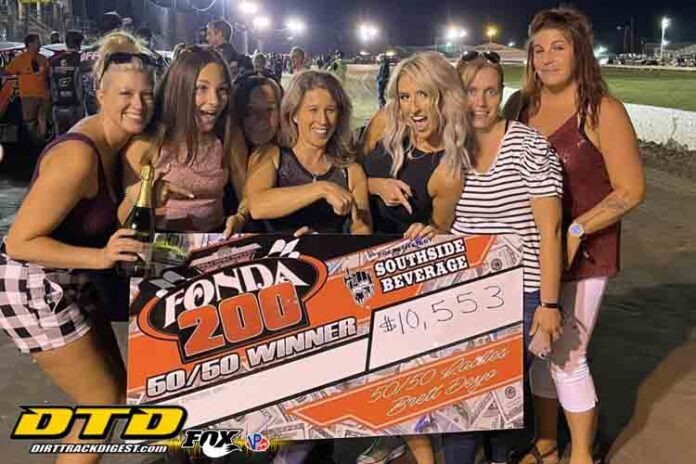 Over the past three years we have watched the rebirth of the historic Montgomery County oval, Fonda Speedway, the Track of Champions.

The first year of Brett Deyo’s operation of the track was nothing short of amazing.  Then the second year, the COVID-19 virus hit and he did all he could to operate a speedway without fans.  Somehow he made it through that, and in 2021, he returned with all the promise of the first year.  With this past weekend of racing for three days, the racing world knows Fonda Speedway is back and heading into the future. 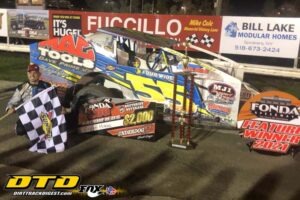 The racing began on Thursday night with a special 33-lap race for anyone who had not won a Modified feature in 2021.  27 cars began the event and in the end it was Brett Haas of Pittsfield, MA. and Lebanon Valley regular, stood in victory lane for the first time at the Track of Champions.

Day two of the Fonda 200 weekend saw 50 Sunoco Modifieds attempting to qualify for the $53,000 to win Fonda 200 coming up on Saturday. Seven cars qualified through each of the four 15-lap heat race events with the top three finishers redrawing on Saturday for starting positions in the prestigious event.

Matt Sheppard of Savannah, N.Y., took the win in the first heat,  Rocky Warner of Gloversville, was the winner of the second heat race, Tyler Dippel, Wallkill, N.Y., won heat race number three and Danny Varin of Fonda won the final heat. All heat race winner were awarded a $500 bonus.

Racing events on Friday included the Pro Stocks, the CRSA Sprint Cars, Four-Cylinders, and the Street Stocks and Kenny Gates, Jordan Hutton, Ken Hollenback, PJ Bleau, and Matt Mosher were the feature winners in their respective divisions. For Hutton and Mosher, it was their first career wins at Fonda and for Hutton it was also his first CRSA Sprint Car victory.

On Saturday the excitement was building as the last chance qualifying events took to the track for the Modifieds.  Winners in the two Consi events were Darren Smith and JaMike Sowle.  Sowle was behind the wheel of the Palmer Service Center No. 76.

As the cars assembled on the front stretch for the running of the Fonda 200 and drivers walked to their cars in front of the fans in the grandstand, the excitement began to build.

To honor Jack Johnson, Fonda’s most winning driver who passed away this past April, a replica of one of his orange and white coupes paced the field four wide before the green flag was thrown for the front row of Jeff Rockefeller on the pole and Danny Varin on the outside pole of the 40 car starting field. 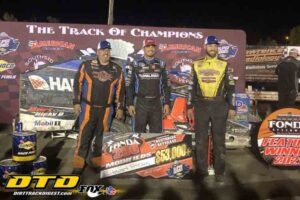 When the 200 laps ended it was Stewart Friesen of Sprakers standing on Fonda’s famous checkerboard square with the $53,000 check in his hand and Rocky Warner of Gloversville finished second taking home $20,000 and Mike Mahaney of Kings Ferry, NY that home $10,000 for third.  An interesting bit of trivia; the top three in this Fonda 200 was a repeat, in the exact order, of the top three the last time the Fonda 200 ran in 2019.   Adam McAuliffe was the winner of the “Hard Charger” award in the Laudy Hoyenga owned No. 234 Modified from 33rd starting position to finished seventh. 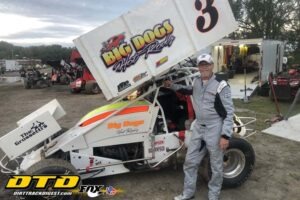 The CRSA Sprints were on hand on Friday for the Fonda 200 weekend with a 20 car field of sprinters.  We stopped by the pit of veteran racer, Link Pettit, a second generation driver that loves to be at the track racing.  When we saw him he had missed hot laps because he had found an issue with his car so he was now ready for his heat.  Link says he knows he cannot take on the higher budget teams but he loves to race and we feel it’s essential that racers like Link Pettit show up because without them there would not be full fields.  Thank you Link, we like that you love what you’re doing. 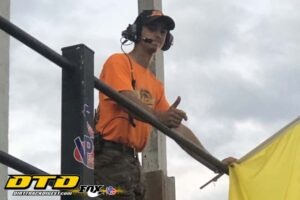 On one of our many walks from the pits to the grandstand, we spotted a flagger in the stands and found it was young, Cole Nelson of Amsterdam.  He’s 20-years-old and is the official flagger for the MVVDMS.  Most of the Fonda Faithful will realize that in the stands or on the ground with flags in your hands, mimicking the starter on the flag stand is where it begins for many.  Fonda’s current head starter, Joe Kriss started just that way. 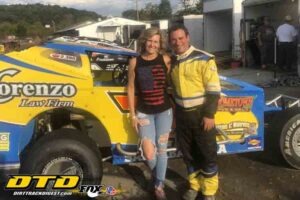 We stopped by the pit area of Dan Santabarbara and his wife Lori.  They were married a couple weeks ago and we wanted to congratulate them.  Dan knew he was attempting to make a show with some of the very best competitors but was hoping he could hold onto his fifth place starting position in one of the Consis.  He missed making the show but we appreciate his effort and his plan if he made the feature.

As always we can depend on Denise Page to have something special to dine on and Saturday it was Lasagna soup, delicious, Lasagna soup. 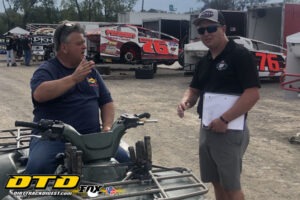 We saw Fonda announcer, Chris Moore going old school, with pen and notebook in hand gathering information on race teams to share with the fans.

Jeff Morell hadn’t been to Fonda in 20 years but he came on Saturday to see his friend and fellow worker, Brian Borst race.  He was not disappointed. 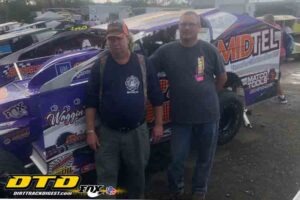 Fonda has some of the most dedicated 50/50 sellers each week and on Saturday additional help came in to bring the total number of sellers to seven.  Heather, Sienna, Julie, Ashley, Dylanne Kae, Heather Lyn and Rose all were busy from the time the gates opened at 2 pm until the final call near the end of the 200-laps.  It paid off for the winner who took home $10,553.

In closing we send our condolences to the families of Claude Riley and Dave Dalesandro who passed away this past week.  Both gentlemen were a huge part of local racing, Claude as an official and Dave as a photographer.