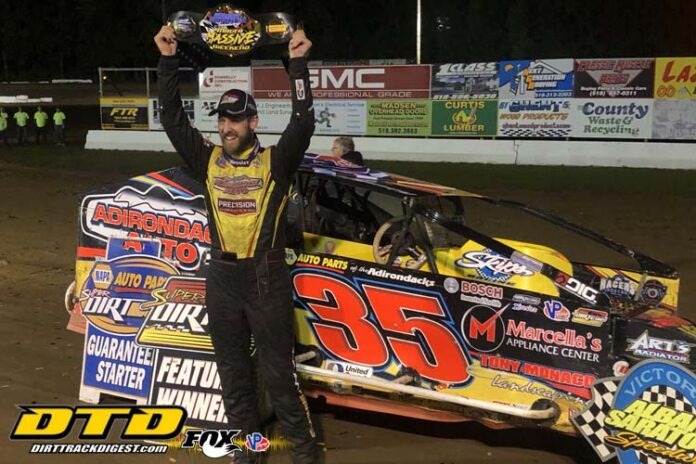 When you title something, Massive Malta Weekend many things have to fall in place and for promoter Lyle Devore and his staff it all came together for a weekend that anyone would be impressed with.

On Friday night a special winner’s race was held for all Modified winners in 2021.  This would have produced a field of 15 cars except for two drivers were unable to attend, Stewart Friesen was in Las Vegas for the NASCAR Truck Series event and Peter Britten was 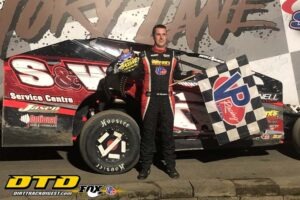 in his homeland of Australia.  Both returned for Saturday’s Super DIRTcar Series event of the weekend.  The  20-lap winners classic turned into a highly competitive event with Ronnie Johnson taking the win with a last lap pass and stood in victory lane collecting $2000.

The 358-Modified event on Friday was only a prelude to what we would see on Saturday.  The 50-lap event was not a easy victory for eventual winner, Mat Williamson.  Once Mat was in the lead most thought the event was over but Mike Mahaney had different ideas and passed money Mat.  Mat said at that point he thought it was over, but one bobble for Mahaney in turn one allowed the Canadian to get by for the win, his 18th of the season and 141st of his career. 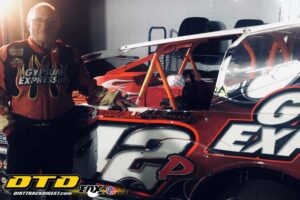 On a stroll through the pits we stopped to talk with a few of the veterans of the sport, first was recent Hall of Fame inductee, and driver of the No. 42P, Pat Ward.  Because of what we read this past week we asked about his future plans and he said they were unsure, he found out about the loss of his current ride the same time everyone else did.  We reminisced about the days gone by and some of the promoters of the past and both agreed we liked racing much better in those days.  Pat had a good run going until he was involved with a lap car, costing him a possible victory. 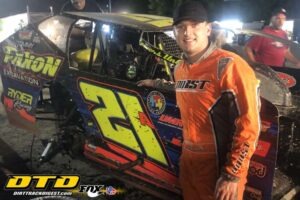 Out next stop was the Tremont team and talking with Abe and Kenny and more reminiscing about the sport of 25 to 30 years ago and they both agreed they liked it better then too.

We stopped to chat with Peter Britten and found Max McLaughlin in his pit area; he was filling in for Peter on Friday night.  Max has had a season of many different rides, even winning the Dirt Nationals Title for Modifieds in Florida last February at Volusia Speedway Park.  Max also won his first ever Super Modified race at the Steel Palace, Oswego this season. 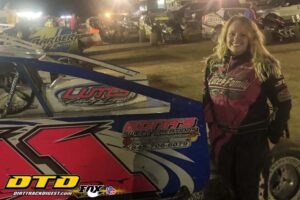 Our next stop was the Lutes pit area where we found both third and fourth generation drivers, Jeff Lutes, and his daughter, Alissa Cody.  Alissa has not raced much in 2021 but she is still whole heartedly committed to the sport.  She has put much time in and feels she is one good sponsor away from a victory.  She still enjoys it when she can be out racing. 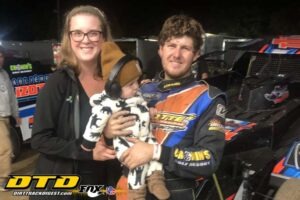 Saturday of Malta Massive Weekend brought another beautiful day and the race fans starting filling in speedway grounds early.  An excellent field of 46 Modifieds were on hand and the fans were treated to some great racing.

While watching the heats from the stairs leading to the VIP Tower, I was joined by driver, Dave Marcuccilli who was watching the competition and the track conditions, something we 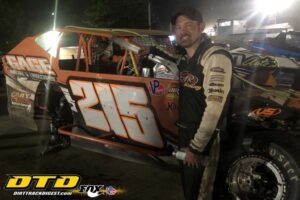 remember seeing Modified’s most winning driver, Brett Hearn do on many occasions.  Dave says he would rather race 358 Mods over big blocks.  Dave has three wins on the season.

We stopped in the pit area of one of the rising stars of our sport, Adam Pierson.  We have watched Adam for some time and he has become a real threat in any race he is in.  Adam Gage owns the No. 215 and all the equipment that Pierson has at his disposal, for which he is very grateful and says it has made him much more competitive. The origin of the No. 215 on the side of the Modified comes from combining a car that Adam Gage raced, 21 and the number Adam Pierson ran, 15. 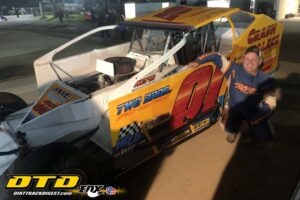 A few steps down pit road and we spotted a beautiful race car that brought back memories of Matt Waite’s No 01.  Matt was one of the racers we lost much too soon, in a non-racing accident.  The throwback car was the idea of C. G. Morey who worked on Matt’s car before he became a driver himself.  This was certainly a beautiful way to remember a friend.

Because of the large car count, there were two last chance events, the first won by, the winningest driver in Modified racing, Stewart Friesen.  The second was a race to remember, 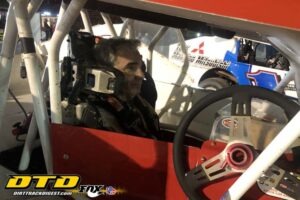 for Don Ronca fans.  With only two cars moving on to the main event, Don Ronca started fifth and nobody told him he couldn’t win from that position.  He charged through the field to third, then second and into the lead to    qualify for his first ever Super DIRTcar Series event.  Don has won at Albany Saratoga before, he has been winning there for five decades.  It was just another special moment on this special weekend.

The 100-lap event was crowd pleaser, as Mike Mahaney’s front row starting spot was not wasted on the King’s Ferry native.  Mike raced his heart out for 100 laps and only relinquished the lead for a brief time to Modified’s most winning driver, Stewart Friesen who passed him with two laps to go.  Mike retook the lead and went on to the win.  Friesen finished second and Matt Sheppard third.  The reaction from the crowd proved that there were many Mike Mahaney fans in attendance or at least on this night they were cheering for him.  It was Mahaney’s first ever Super DIRTcar Series win and one for the books this season.  Job well done, Lyle, Marcy and Mia.  We look forward to next year.

As all of local racing turns their focus toward Super DIRT Week in Oswego October 6-10 we will be getting ready for the trip much like everyone else.  But first we will stop at Utica-Rome on Tuesday, October 5 for the Modern Day Outlaw event, the season finale for the Vernon, NY oval offering $10,000 to the winner and a pay structure through the field totaling $38, 080 for 26 starters.  Also on the card is the 360 Sprints sanctioned by the Patriot Sprints racing for $5000 to win from a pay structure of $18,900 and the 602 Sportsman racing for $1500 to win from a total payout of $6,195.  Until next week please send all news and/or comments to biittig@yahoo.com