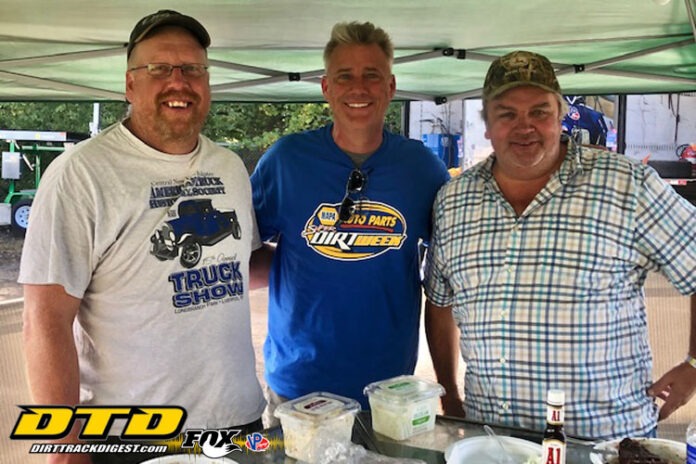 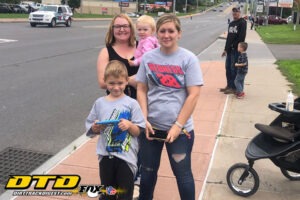 see the parade that has become a tradition. A parade of race cars for the residents and visitors of Oswego to see prior to all the activities at the track for the next four days.
At the parade we spoke with a group of fans and car owners, some from Roscoe, NY and others from Susquehanna, PA and raced at Afton, Accord and Five Mile Point and had drivers like Danny Johnson behind the wheel of their car. They were standing along the parade route to view their car, No. 28 Modified, in the parade and pretty happy with all the things going on so far and thought the parade was a great idea. We snapped a photo of the group while they stood waiting for the parade.

We spoke with Mat Williamson about his season and he said that the 2-1/2 hours he traveled to Land of Legends each week to race was well worth it, because he gained a lot of experience. To beat the best you have to race the best and there was some of the best racing at LoL each week. When we spoke with him on Wednesday, his record showed, 20 wins at ten different tracks, he sat third on the 2021 win list for Modifieds. When Super DIRT Week ended his win record had jumped up to, 23 at 11 different tracks and he still sits third.

Super DIRT Week is a different event because you have nearly a week to spend with racers and fans from all over the country. On Thursday we sat with a gentleman that has more starts at Super DIRT Week than anyone else. Jimmy Horton has competed in 44 SDW events, winning in 1987 and 1994 at the NYS Fairgrounds. Jimmy was sitting in the back grandstands at Oswego checking to see how the track was holding up during hot laps; in the turns it was showing some rough spots. 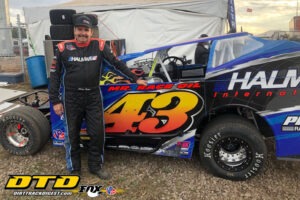 While talking with Jimmy he mentioned how many changes had been made at his home track of Bridgeport and he thought it was all for the betterment of racing there. Jimmy has a total of 142 wins at the New Jersey oval and a career win total of 465 at many different tracks in six different divisions. He said he knew changes should be made Bridgeport and with the new smaller track the racing is better for the fans but tougher on the competition.


While hot laps were on the track, Erick Rudolph rolled his 358 Modified over in the first turn. We later check the pit area and he said he okay. While looking at Rudolph’s mangled racecar we spotted Kenny Brightbill who was also looking it over. He said he recalled a crash that he had at the NYS Fairgrounds during a Super DIRT Week and thought he was okay until the tow truck operator asked him where his pit was and he had no clue. 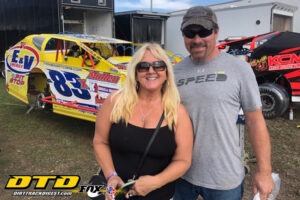 By 4:30 pm on Friday afternoon my Fitbit read, 16,365 steps just shy of eight miles of walking around Oswego Speedway grounds. While on my many walks I spotted a couple on Thursday and Friday more than once and I spoke with them about their interest in the sport. They live in Cicero and are Tim Sears, Jr., fans. Jill and Tim shared with us how Tim had raced years ago until his son got old enough to be involved in sports and he missed one of his son’s games and vowed that wouldn’t happen again, and he hung up his helmet. 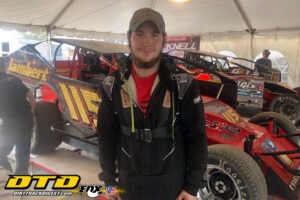 We stopped by the Bicknell tent where race cars were being adjusted to the new track and conditions. Listening to Montgomery Tremont explain what he wanted on his mount was interesting. Montgomery is a second generation driver, the son of Kenny Tremont and was racing in the 358 Modified division at SDW.

There are endless stories at Super DIRT Week. Down the hill from Oswego there is a gas station and as we strolled along with long time fan John Sodemen, we ran into a women, who we later learned was Remington Hamm’s mom. She was exiting the gas station where she had delivered one of her son’s racing tee shirts to the store clerk. Why? Because the clerk had come to work early in the morning wearing a shirt that was now too warm as the weather turned unseasonably warm later in the day; a very nice jester and one showing the kindness of the racing community. 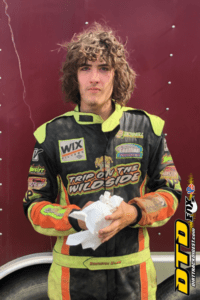 This was not the only story we would encounter involving young, Remington Hamm, a regular Sportsman racer from Can-Am who was at Super DIRT Week for the first time competing. Later that same day during Sportsman time trials, the 17-year-old set a time he was very pleased with, and was so excited he did not go to the scale. Consequently he had to start in the rear of a heat race. He was so upset with himself but after a few hours, he was able to put it all behind him and was able to qualify through the heat and started 20th in the feature. There was 102 cars in the Sportsman division at Oswego so there were many that went home disappointed. Remington Hamm raced from his 20th starting spot in the feature to finish tenth at the end of 75-laps. This young man took what could have been a complete loss and turned it into a plus. Next he hopes to go to Eastern States and we wish him well.

On the way to media parking we spotted WRG, CEO Brian Carter stopped at one of the many campsites on the grounds. It was the site of a group of gentlemen he had met a year before and he stopped to say hello and see what they thought of the show so far. Craig from Hannibal, NY and Hubert of Fulton were surprised that the top guy from DIRTcar would take the time to hear from the fans.

With the Super DIRT Week complete for another year, all fans turn their attention to Orange County Fair Speedway in Middletown, NY and the 60th Eastern States Weekend, October 22-24.

Some fans will also be heading to the Speed Showcase at Port Royal Speedway in Pennsylvania this weekend. We will be watching the Speed Showcase on FloRacing.
Until next week please send all news and/or comments to biittig@yahoo.com