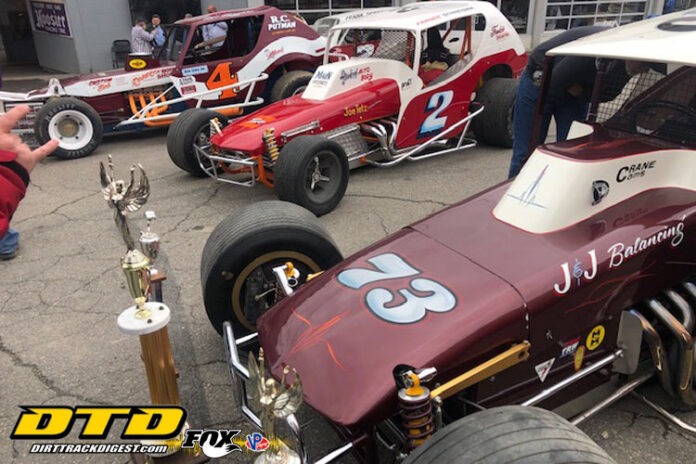 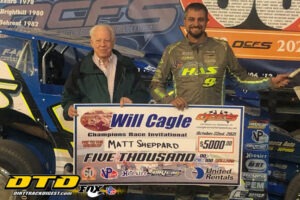 For us the 60th Eastern States Weekend was one for the books.  From the beginning on Thursday to the final event on Sunday it was all about celebration of Orange County Fair Speedway’s historical Eastern States race and those who had won it.  Memorials were included to remember those who made the 60 years of racing on the “Hard Clay” memorable.  A special 24-lap race to honor Will Cagle was run on Friday night, Will Cagle Race of Champions and won by Matt Sheppard.  For the many history buffs their were great displays of vintage Modifieds; all a part of the rich history of the Hard Clay. 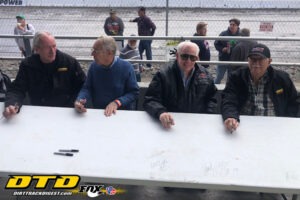 With the all-time winner at the speedway becoming the General Manager, Brett Hearn has put together a winning team at Orange County Fair Speedway.  The first thing that needs to be mentioned is the track surface and Jeremie Corcoran and with his special touch that was put on the surface to bring a beautiful racing surface for the drivers.  There seems to be a limited number of people that can prepare a track and everyone won this weekend.  And there were two Brett’s in charge for the weekend.  With Brett Hearn and Brett Deyo on hand it made things come together nicely.

We could not make the first day of the four-day event so about 5:00 am on Friday, Ed was like a kid on his birthday.  He was eager to get going and this event is always a key event to our racing season.

There was one special event that we were looking forward to, the new feature length documentary of Gary Balough, “A Checkered Past”.  As we watched, we found our eyes tearing up and at the end when we spoke with Gary we realized he had the same issue.

As many know, Ed has been in recovery from alcohol for over 47 years and speaks many times with Gary.  Unless you have walked that road you will never understand.  We feel that anyone can make a bad choice or more than one and the documentary covers the good, the bad and the ugly.  We are thankful that Gary is still alive.

After the show we spoke with Scott who travels with Gary on his visits to speedway and other events.  The last 13 years the two of them have been there to support one another.  If you get the chance to see this show please take the one hour and thirty minutes to enjoy it and learn. 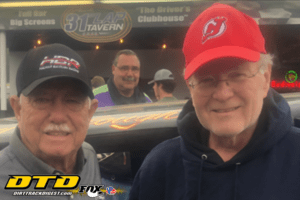 Co-promoter at OCFS, Chris Larson has not only done much to make improvements around the 102 year old oval he has also done much for Gary Balough and in sponsorship for Stewart Friesen and many other drivers.  Each time we attend a show at the “House of Power” we get the chance to speak with Chris Larson and we find out quickly how much he cares for the speedway and the history and drivers.

What has become a custom at special events at OCFS is special posters made for the occasion to be signed by the legends of the speedway.   Doug Dulgarian has a large hand in this and the posters are not a light weight version, but are made of card stock and suitable 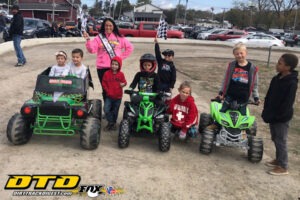 for framing.  Sunday the Modified field came to the grandstand side to sign another poster made for the event.  Joining the active drivers were drivers from the past, Buzzie Reutimann, Will Cagle, and Kenny Brightbill. This was a crowd favorite.

On the RC Track just outside the main gate we found a group of kids on various wheeled vehicles having a great time.  At the end of their event, handled by the kids club, each was given a prize for their efforts. 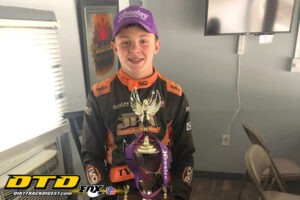 The Sportsman race on Friday night ended up with a repeat winner from the year before.  Young Tanner VanDoren was declared the winner after a disqualification of L. J. Lombardo for a valve spring infraction.  Tanner was given his spot in victory lane on Sunday as the winner.  Last year when he won at Eastern States, Brett Hearn shared with us that even at his young age, he was a very talented driver.  It seems that drivers are getting younger with each year of racing.  There is 60 years difference in age between Ed and Tanner, something we never imagined we would see.  He has a great future in our sport. 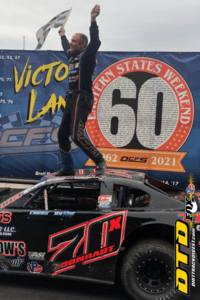 The Pro Stocks returned to OCFS on Sunday and once again put on one of the best shows of the weekend.  Four out of the top ten finishers were Fonda regulars, with Josh Coonradt of West Milton taking the checkered flag home giving him his 96th career win.  Horning was fifth, Ballard, sixth and Joslin tenth.