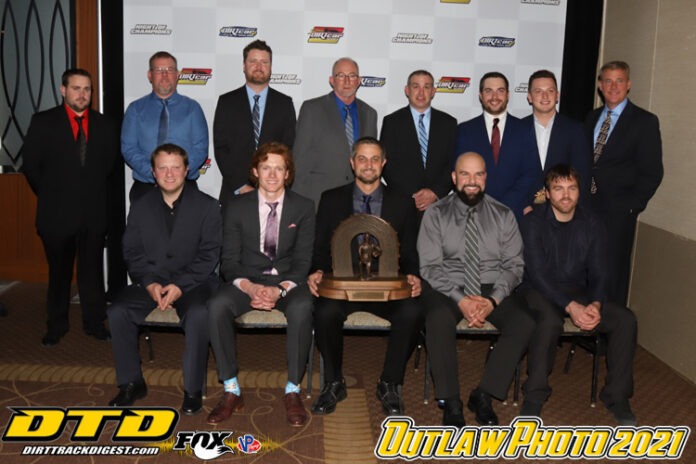 This past Friday BD Motorsports Inc. honored the point leaders and champions for the 2021 season at Fonda and Utica-Rome Speedways and the special five race Thruway Series held between the sister speedways. Nearly 350 people attended the event at Vernon Downs Casino in Vernon, NY where $105,725 was awarded. 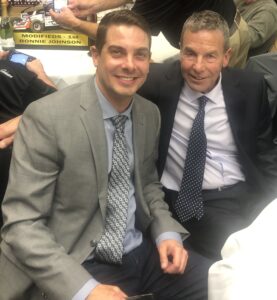 At the beginning of the night Promoter Brett Deyo addressed crowd with a version of the State of Racing at the two tracks, stating that the night that Fonda honored Jack Johnson was monumental in bringing back the fans and returning the racing to normal after the year of restrictions do to COVID-19 in 2020. A big addition to the 2021 season was the broadcasting of all events on Flo Racing where 8000-11000 viewer per night tuned in from all over the country promoting Northeast Modified Racing to new fans.

Deyo thanked the many members of his team at both tracks recognizing Jamie and Denise Paige the track and concession managers and Craig Hanson who operates the grader and waters the track during the week at Fonda while still managing to race each week in the Modified division.

The Deyo team continues to make improvements at both speedways. Scheduled for installation at Utica-Rome is 73 new lights and the Fonda Fair Board recently approved new lights at Fonda. The Fonda 200 will return in 2022 on September 15-17, paying $53,000 to the winner. The New Yorker at Utica-Rome on September 4 will pay $25,000. 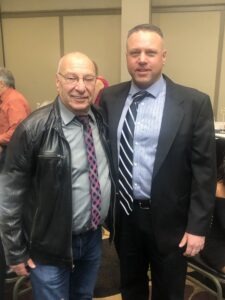 Awards for Fonda’s Modified division went to Co-Champions Ronnie Johnson and Rocky Warner. Johnson of Duanesburg celebrated his third title at the track and for Warner of Gloversville it was his second. Historically it was the first time ever in the 70 year history of the track that co-champions were crowned. Both received $10,000 each of the $34,972 point fund for Modifieds alone. Stewart Friesen of Sprakers finished a close third by five points. His wife Jessica finished ninth. The co-champions shared the title with mutual respect having been racing friends for many years. 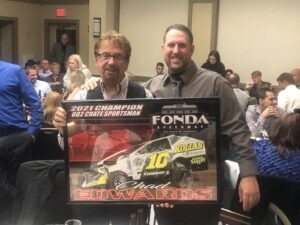 While on stage Ronnie Johnson introduced Carl LaMalfa a long time friend and crew member on his dad’s race team. Ronnie said, for ten years Carl brought lunch to Jack while he was dealing with ALS. Carl continues to love racing and its people and works with Ronnie on his team.

Fonda’s 602 Sportsman champion, Chad Edward of Gloversville picked up $2000 of the $7315 total for Sportsman and thanked his car owner John Kollar who has been in Racing for 54 years, first as a driver before becoming an owner. 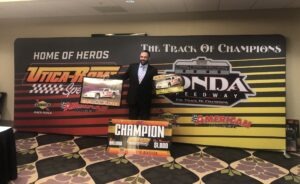 One comment we heard frequently from competitors at Utica-Rome was the great condition and race readiness of the track this season. Jamie Friesen was the one that resurrected the Vernon oval to the pleasure of all who raced there. Track champion, Matt Sheppard said, “I race for a living and consider it a job but I came to Utica-Rome to have fun this season.” 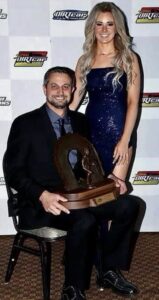 On Saturday the DIRTcar Night of Champions took center stage at the Ramada Inn in Liverpool and Matt Sheppard took home the DIRTcar Series Championship honors for the eighth time. When Shane Andrews asked him about his eight titles, Sheppard said, “I am sitting up here thinking about where we are today and where we were back then, twenty years ago I was bombing around in a burgundy 1979 Chevy pickup truck. I was driving for Steve Paine and I had none other than Matt Janczuk in my backseat because he’s got nothing better to do and I can’t find anyone else to go to the races with me. Here we are 20 years later. It’s crazy how time flies, It seems like yesterday.”

WRG, CEO, Brian Carter addressed the crowd thanking all in DIRTcar Northeast for all they did to pull through successfully the past two years with the virus. 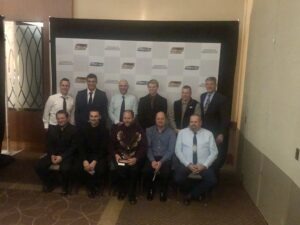 Billy Dunn was honored with his first 358 Modified championship. Dunn said it had been a long time since a Can-Am regular won the 358 Mod championship.

Matt Janczuk won the overall DIRTcar Sportsman Modified Series championship, worth $3,000, for the first time as well as his second Central Region title in two years. Chad Jeseo was 2021 Track Champion at Lebanon Valley and Albany-Saratoga and took home the rewards as the Super DIRTcar Series Pro Stock Champion on top of winning the Pro Stock 50 at Oswego. Jeseo took home $2000 for his DIRTcar Series championship. 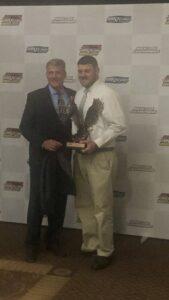 Until next time please send all news and/or comments to biittig@yahoo.com.