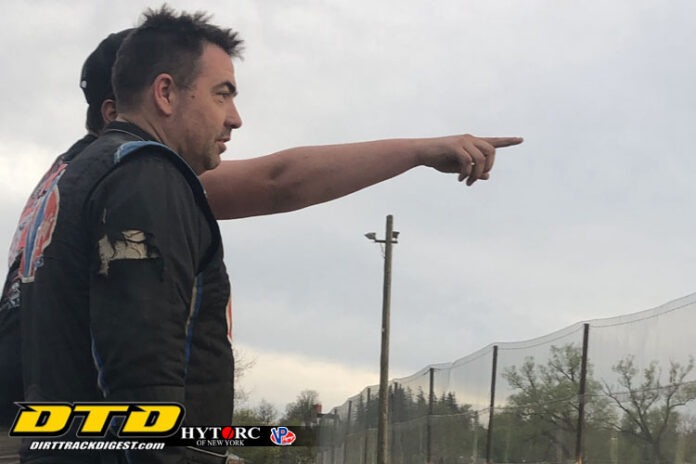 The weekend started with Ed, Jr., and family taking Betty out to dinner to celebrate Mother’s Day.  The rest of Friday was spent watching Stewart Friesen in his NASCAR Truck Series throwback truck honoring Jack Johnson and Northeast Modified racing.  We switched back and forth from the NASCAR broadcast to Flo Racing and the action at Utica-Rome while in between Ed was watching race monitor for what other action took place in the racing world.

Matt DeLorenzo ended a nine year winless streak at Fonda one week ago and this past weekend he backed it up with another win.  His win this past Saturday came with a last lap pass of New Jersey invader and dirt track standout, Ryan Godown.  Godown made the trip to Fonda when his Saturday night home track, Bridgeport, rained out.  “I’ve never been here, never even seen the track,” said Godown, as he got ready for the nights racing.  He qualified third in his heat and by luck of the draw sat on the pole for the 30-lap feature.  Luck is always important and the New Jersey driver took advantage of his lucky draw and jumped out in front at the drop of the green.  He was followed by another invader, young, Alex Yankowski of Covington Township, Pa. with 2021 co-champion, Rocky Warner and Stewart Friesen in tow, all challenging for the top positions.  Yankowski took the lead from Godown on lap five and pulled away to a substantial lead.  Godown retook the lead on lap 18 and held it until the final lap when Matt DeLorenzo, who was running second, was able to get by him in turn three and four and move on to the checker.  Godown said afterward that he made the wrong lane choice that allowed Matty D. to get by to record his 39th win at the “Track of Champions”.  As the checker flew it was DeLorenzo, Godown, Friesen, Warner, and Ronnie Johnson who had come from 19th starting position.  All in all it was one of the best races we’ve seen in a long time and we expect the end of the season big money shows to be real barnburners. 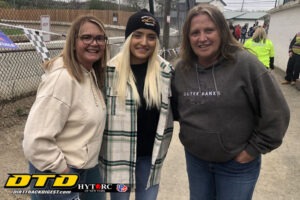 Before the racing program started on Saturday at Fonda, members of Artie Desarbo’s family, daughters, Kristine and Susan and granddaughter, Samantha, gathered on Checkerboard Square with Ronnie Johnson to remember Artie and JoJo, pit crew members for Jack Johnson throughout his racing career.

Darwin Greene has become a regular at Fonda, one that travels 2-1/2 hours each way to get to the track each race night.  Along with Darwin each week is his wife Paula and 11-year-old son, Darwin, Jr., who is also a racer himself.  Darwin, Jr., races in the 600cc class at PennCan near their home in Pennsylvania where dad also races each Friday also. 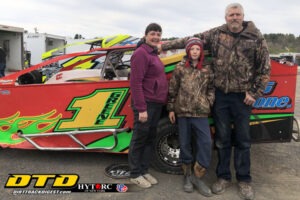 You might ask, why does Darwin Greene travel so far to race at Fonda?  “Because there is no more exciting place to be than riding the outside of the track on Saturday night,” said Greene.  He loves Fonda Speedway and that is why he’s here each week. Darwin comes this season with a Higfab chassis and a backup, Bicknell.  The Greene family is truly a racing family, Paula’s dad and brother both raced and Darwin says that’s how he got involved. “Her father put me in a car the night before our wedding, and I was hooked.”

Darwin and Paula are involved in the mining and manufacturing of Pennsylvania Blue Stone, a business his father started in 1966.  Darwin runs very large, heavy equipment all day so wheeling a Modified around a track is like driving a toy.  Paula runs the office for the business.  Some of the places you can find their Pennsylvania Blue Stone is sidewalks in Rockefeller Center in NYC and Washington Square Park, the Tomb of the Unknown Soldiers of the Revolutionary War in Philadelphia.

Sunday night was another trip to Glen Ridge and this week we focused on one of the All Star Slingshot drivers, Adam Fusco, who was also the winner in the division on Sunday. 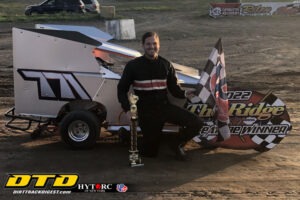 The Fusco name is certainly familiar to racing in the area and Adam’s father, the late Andy Fusco was not only a familiar name and face but a true friend to racing.

Adam began his racing career at four-years-old in a Micro Rod at the NYS Fairgrounds.  At about 14, he moved up to Ford Focus Midgets until his was 18 when he attended the Skip Barber Racing School.  Next it was Spec Mods (similar to Limited Sportsman).

He took time off from racing to go to law school but it was never far from his mind.  His racing career has included racing Street Stocks and Four Cylinders at Weedsport, Midgets at Seekonk Speedway and currently a slingshot at Glen Ridge because it’s close to his home in Johnstown.  He loves being a part of the racing community at The Ridge and says he wouldn’t be able to do all he does if not for the help of his girlfriend Melissa Baker.

By day Adam is an attorney and a real estate broker with partner Pat Cherko. He has always been involved in racing in some way and Cherko/Fusco Realty currently sponsors the Limited Sportsman division at Glen Ridge and several cars in numerous divisions at local tracks.