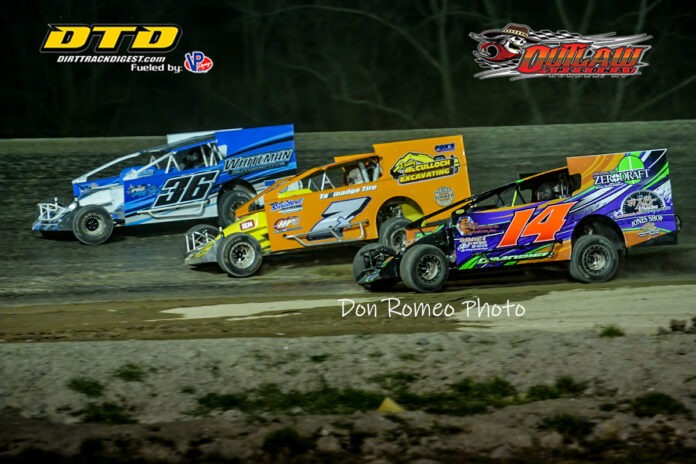 It was a beautiful Saturday afternoon in Dundee, N.Y., as the Outlaw Speedway opened their season with the Lucas Oil Nationals. Good car counts of Modifieds, American Racer/Hoosier Sportsman, Street Stocks, Hobby Stocks, and Four Cylinders. I was able to catch up with some of these drivers, from the early season invaders to the full season regulars.

Many will recognize Torrey Stoughtenger as a regular Sportsman driver at the Brewerton and Fulton Speedways. However, Torrey is set for a ‘big’ chance of pace in 2021. Stoughtenger has made the move to the big-block Modified class for this upcoming season.

“We used to have two cars. In the offseason, we traded one of our cars with a guy who traded us a W16 for a 358 operation. We got in contact with Eldon and Alex Payne, who came up with the idea of trading our small block and crate for his big block. So my Dad and I talked it over, and we knew we wouldn’t have this chance again, so we went for it.”

Stoughtenger’s plans for the 2021 season primarily will focus on Land of Legends Raceway.

“We are going to be easing up on the traveling to get used to the car. We might hit some tracks like Weedsport and Brewerton”.

Chad Homan has become a fixture of the 604 Late Model scene in the Northeast. While he ultimately won the RUSH Late Model Series event later, I caught up with Chad early on in the day to discuss his plans for this coming season.

“Nothing’s solidified yet, but we plan on being at Fulton on Saturdays, and possibly The Hill Speedway on Friday’s.”

The multi-hour tow to The Hill is part of Chad’s eagerness to travel in 2021.

“We aren’t going to run the whole RUSH tour, but we should hit most of it, along with hopefully some end of the year shows at Lernerville.”

With these travel plans in mind for 2021 and beyond, Homan quipped, “I need a toter. It’s tough.”

Another driver looking to travel is young Sportsman driver Emmett Waldron. His rookie season at Land of Legends flew under the radar for many people as the youngster stayed close to the track for a variety of factors. This year, however, is going to be different for the No. 4 team.

“I don’t think we’ll be running Canandaigua much. We’re just going to go wherever we want. We want to hit the tracks we couldn’t because of COVID last year”.

All In The Family

Steve Paine is a household name in the Modified realm. The 2000 Super DIRTcar Series Champion and DIRT Hall of Famer is joined by his sons Billy and Tommy, who race Sportsman at the Outlaw Speedway.

While many others want to travel, especially in light of last year’s COVID-afflicted season, the Paines are comfortable at the Outlaw Speedway.

“We’ve got a new small block car for me,” said Steve. “Billy has the same car he had last year. Tommy has a 2020 frame this year.  Otherwise, not much has changed. We have a big block frame painted for me. I doubt we’ll make the Land of Legends opener, but you never know.”

As for Billy, he is very comfortable at Outlaw.

“I plan on staying here,” he said.  “I like the American Racer tire and the rule set for that class here. I might run a race here or there if my add suggests it to me, otherwise I’ll only be here.”

Tommy feels the same way as his brother. Tommy said, “No travel plans for me as of now, just Outlaw.”

Another family prominent in the Northeast racing scene are the Guererri’s. Nick, Paul, Matt, and Frankie Guererri are all familiar names to many. Today, before racing began, I caught up with three Guererri siblings: David Jr., CJ, and Hannah. The sons and daughter (respectively) of David Guererri Sr. have prepared a three car fleet for their racing operation in 2021.

“This car we brought tonight is a brand new car for us,” David said.  “Our Barrett car was mostly prepared by Glenn Whritenour, so I focused on this one”.

David Jr. has stepped out of the driving seat this year, instead putting all his effort into the setup side of operations while CJ drives.

“We plan on running Land of Legends weekly,” commented CJ.  We want to hit some Penn-Ohio shows. We want to go to Lake View Motor Speedway as well, I’ve been talking to Scott Tripp (LVMS Promoter), and Tom Lavette about a trip down there.”

Hannah’s four cylinder is the third car in the operation as she returns to the wheel for the first time in 11 years.

“I need seat time,” Hannah stated.  “I surprised myself last night in practice.”

In addition to gaining seat time and speed, Hannah also plans to do a small amount of travelling.

“I’m definitely going to run Paradise. I love this track (Outlaw), I really enjoyed racing here last night. I might check out Brewerton.”

Alan Johnson dominated the Modified feature to claim his first win of 2021, extending his consecutive-year victory streak to 47 years of winning races. The veteran pilot of the No. 14j quickly worked his way to the front, grabbing the lead early on from Tyler Siri. Johnson slowly jetted away from the field as there was a brawl ongoing for second place. A more fitting title would be a royal rumble, as Danny Johnson, Steve Paine, and Tyler Siri duked it out for the second spot. Ultimately, Tyler Siri gave an apple to the Doctor and weathered the Hurricane to take home second place.

The American Racer Sportsman class saw AJay Portrzebowski Sr. drive away to claim his first win of 2021. Portrzebowski led most of the way but was not without company. Karl Comfort, Alex Payne, and Zach Sobotka were hot on his tail, trying to make something happen.  Comfort had multiple attempts to pass Portrzebowski on the bottom of the speedway, but Portrzebowski proved too fast on this day.

The Hoosier Sportsman was almost the same race as the American Racer Sportsman race was if you swap father and son Portrzebowski. Ajay Portrzebowski Jr., Zach Sobotka, Alex Payne, and Tommy Collins Jr. were within striking distance for most of the 30-lap main event. Sobotka lead the way for almost all 30 laps of the main event, but Ajay Jr. was hot on his heels. Ajay had a move for the lead just about complete when a late race caution flag came out. The reset was what Sobotka needed, as he claimed the Hoosier Sportsman feature win.

The RUSH Late Model Series race was a barn burner feature. Chad Homan and JJ Mazur dominated the event. Mazur pulled away early with Homan in hot pursuit, although Homan had cleared Mazur for the lead by halfway. Mazur was nowhere near done with Homan however, and slowly reeled himself back into the races with just a handful of laps to go. Mazur could not get the top rolling as fast as Homan had the bottom rolling however, and Homan would claim a hotly contested win with Mazur on his rear bumper at the line.

Glenn Whritenour drove away from the field to claim his first win on the year. CJ Guererri came home in second with his new car, while Adam Depuy rebounded from a flat left rear tire while challenging for the lead to finish in third. Dennis Cummings took a wild ride in turns three and four which saw his No. 74 machine go upside down. Fortunately, Cummings was okay after the accident.

The Hobby Stocks main event was a race of absolute chaos. By halfway, it seemed that Justin Eldredge in his #25j machine was the class of the field, pulling a straightaway advantage on the #25 of Marc Minutolo. A late-race red flag for a rollover on the backstretch set the stage for Minutolo to make a move on Eldredge. As Minutolo dove to the bottom, Eldredge slid off the top of the speedway in turn 3, which gave the lead to Minutolo as another car followed Eldredge off the berm. Eldredge, undeterred by his off-road excursion drove back around most of the field in a few short laps to claim fourth place

Ray Hyer drove away from the field in the Four Cylinder main event. The event was action packed, with the #98 of Cole Susice starting on the pole. He quickly be worked past by Hyer, which led to multiple laps of three and four wide racing. Suscise eventually pulled off with problems as the field slowly began to spread out, allowing Hyer to blast off into the night and cap off the Lucas Oil Nationals weekend at Outlaw Speedway.