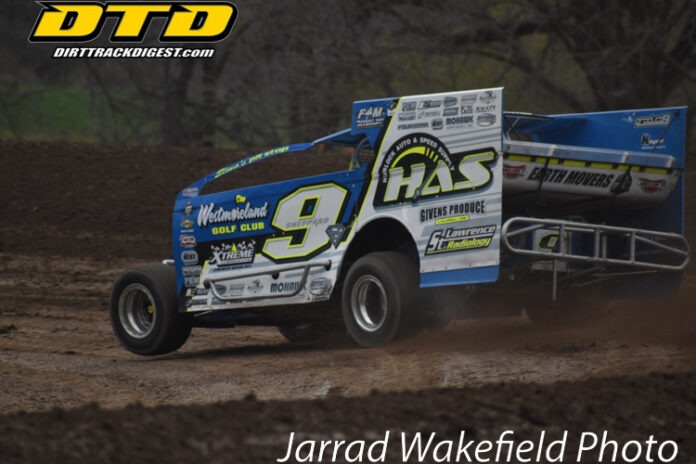 Matt Sheppard is no stranger to victory lane at the Outlaw Speedway.

In the pandemic affected season of 2020, Sheppard was almost unbeatable at Outlaw Speedway. So unbeatable in fact, that a bounty placed on him mid-way through the season by the track.  It never ended up being claimed by anyone. Sheppard’s only races where he didn’t win often were associated with bad luck; such as mechanical failures and contact on track.

While Sheppard may not have attended last week’s Lucas Oil Nationals, it seems to have had no effect on slowing Super-Matt. It may have not been an immediate domination of the event, but once Sheppard passed Tyler Siri for the lead after clawing his way through the top 10 from his ninth place starting spot, it was over for the rest of the field. Despite a late race caution, Sheppard drove away from track promoter Siri, Brady Fultz, Danny Johnson, and Nick Nye.

The heavy rains that came down at the Outlaw Speedway in the week leading up to the event made for a very heavy race track, one that Sheppard found surprisingly fast.

“The track was unbelievably fast tonight, at times it was a bit treacherous,” said Sheppard. “When the track is that fast, we’re all hammer down. I had to find a clear line, as well as some clean air. Once I got those, we were able to hold on until the finish.”

While Sheppard may have dominated at Outlaw in 2020, his 2021 plans are still not quite concrete.

“I honestly haven’t decided where to run yet, to tell you the truth,” said Sheppard. “We have Bristol next weekend for the Super DIRTcar Series, then we are coming back to Outlaw on the 30th, and we’re going to see what happens from there.”