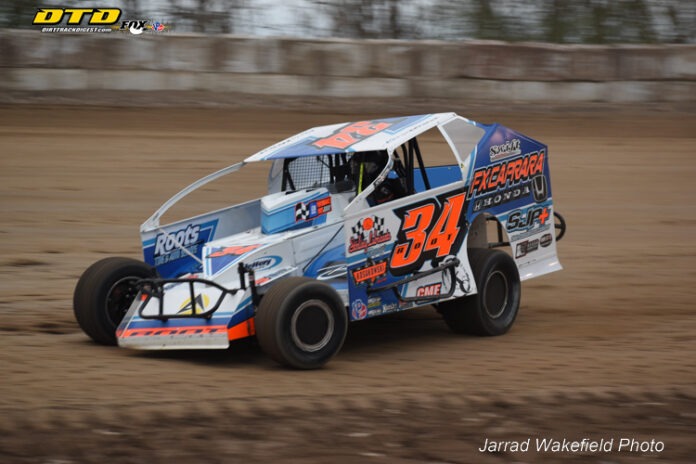 Many teams in the Sportsman class look forward to the day when they can move up. In the past few years, the dominant trend has been to enter the 358 Modified class, with motor options such as the W16 making the cost barrier to Modified racing lower than it has been for years.

However, one might say Mark Yorker moved up diagonally.

A long time regular at the Brewerton and Fulton Speedways, Yorker has campaigned his No. 1 Sportsman with what many would consider success, consistently running well and notching wins at his home tracks.

Now, in 2021, Yorker has moved into what many would say is one of the best Sportsman cars in the Northeast; the Kevin Root-owned No. 34.

“Kevin’s equipment is a lot better than what we had,” said Yorker after taking a second-place finish in his heat. “Our stuff was outdated; we were a small team that couldn’t do much. Kevin’s given me everything I could possibly ask for. It drives totally different than what I had; I think it drives better.”

He added, “It’s just a good car. We’ve only had hand-me-downs all these years from everybody else. It’s just a great feeling to have all new car like this. I just have to get used to driving the car. We’ll get there, maybe not as fast as Kevin wants, but we’ll get there.”

Yorker’s plans for 2021 include weekly racing at Brewerton Speedway, the full Weedsport Speedway schedule, and the DIRTCar Sportsman series races, creating a schedule that is packed with strong fields to test Mark Yorker and his new #34 ride against the best Sportsman drivers in this region.

While Yorker says it may take some time for him to get used to the car, he seemed to be right on the pace at Fulton Speedway on Opening Night. He finished second in his heat and brought home a fifth place finish.

While the season is young and many will wonder how Yorker will fair driving a car that has dominated the Sportsman class, one thing is certain about Yorker; he is very grateful for this opportunity and very enthusiastic to get into the 2021 season.