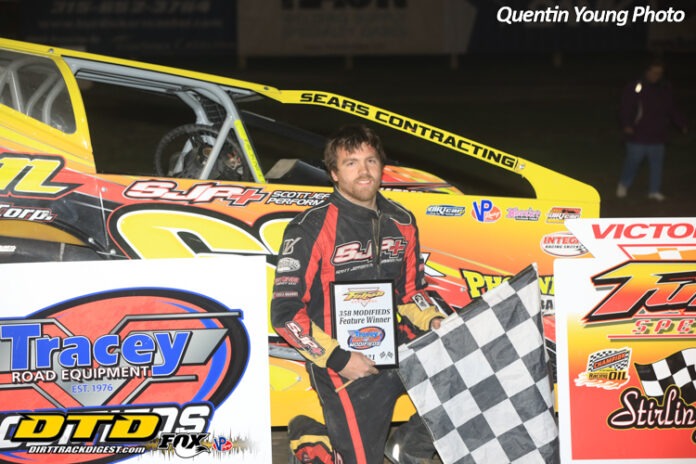 Tim Sears Jr. has been nothing short of fast out of the starting gate in the 2021 Modified season. Sears Jr. currently sits in 4th place in the Super DIRTCar Series points standings as of the writing of this article. This feat is especially impressive when considering who Sears Jr. is ahead of in the standings. Matt Sheppard, Erick Rudolph, Larry Wight, and Mat Williamson are just some of the high-caliber names Sears Jr. is leading.

Sears Jr. proved that his hot streak is going nowhere soon with a dominating 358 Modified win at the Fulton Speedway to lift the lid on the 2021 season. Sears Jr. took the lead just before halfway after a restart. Sears Jr. had struggled to pass current leader Jimmy Phelps in earlier attempts, but on the restart Sears Jr. was finally able to make his move stick, and would proceed to drive about a straightaway away from the field in a race that went green after that fateful restart.

Tim said in his victory lane interview, “When we went green, I saw Jimmy Phelps bouncing through the holes, but you could miss them if you hugged the uke tires. He was hitting the holes though; the top was the place to be. The traffic was difficult to pass, we were the same speed as many of them on exit. We were better on entry and in the center, so that’s how I got around them”.

When I caught up with Sears Jr. after the race, the impact of the win was not lost on him.

“It means a lot to come and win at our home track. It was great to see everyone back here, especially fans in the stands. It just feels good to be back home,” said Sears Jr.
“I have to thank all the support behind me. We made the offseason switch to Troyer on the big block side. They have been really good to me. The Mullen team put together a great small block ride for me. All of my cars I am driving this year are really stout pieces.”