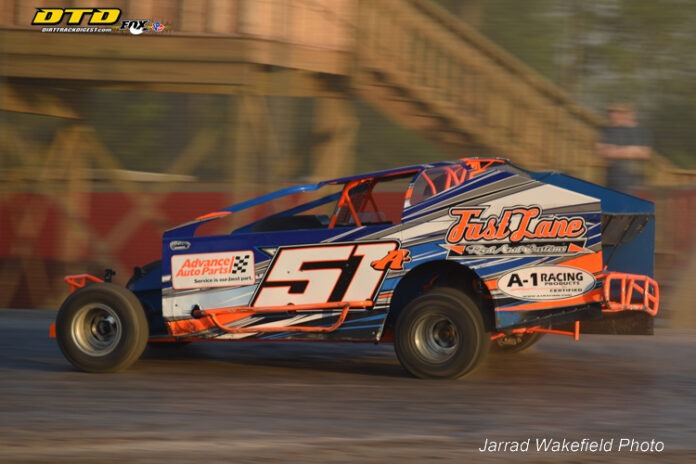 Many new competitors join the Sportsman ranks every year. They come from all walks of life, from those who have dreamed of racing their whole lives, to those who are simply looking for a new hobby.

Zac McDonald is a more unique case, however. McDonald is an Australian Modified driver who has made the journey across the Pacific to race in America. He has been taken under the wing of Eric Williams, a current Modified competitor and former Sportsman competitor as well.

“I started talking to Eric Williams after I saw him comment on a Facebook post asking about Australian Modifieds,” said McDonald of the plan for him to come to America. “We just kept talking, and he eventually said, ‘Why don’t you give it a go over here?’ I was supposed to come last year, but COVID happened, so it got pushed to this year.”

It has not taken McDonald long to notice differences between the American and Australian Modified scenes.

“In America, the tires are smaller than what we run in Australia”, said McDonald. “We’re about a year behind technology wise. Coils and left-side setups are big here, but back home my Modified was still on torsion bars with a j-bar. This is my first time being on coils on all four corners. We’re actually really in touch with what goes on over here, a good lot of us back home are friends with guys over here.

“I’ve had a hard time getting on the Hoosiers. I’m still learning, the car just doesn’t like to turn well on them to be honest.”

A major characteristic of Australian Modified racing is the size of the tracks. While track lengths such as three-eighths, fourth tenths, and half of a mile tracks are common in the American Modified scene, most Australian tracks are smaller than three-eighths, and usually settle in around a quarter mile. Even the Outlaw Speedway, where Zac was racing on this night, would likely be considered large in Australia.

“When I ran Land of Legends on Saturday, I was thinking about how long it took to get down to the turns,” said McDonald. “To be honest with you, it didn’t blow my mind too much. We have 602 crate cars at home, but I ran the Modified class there. The speed I get to at a place like Land of Legends in the Sportsman isn’t too far off what I’d get with a Modified back home.”

McDonald has a lot of ambition and motivation for his American journey in 2021, and his schedule shows that. McDonald and Williams are gearing up for a very busy season with their Sportsman and Modified, respectively.

“We’ve got a busy schedule,” said McDonald. “I want to hit as many tracks as I can.  I likely won’t settle into just one or two places. We’ve have got 55 races coming up in five months. How much more we will do depends on how we feel. We’ve been struggling with getting the car to drive right, but tonight we’re going to try some stuff to see if we can get closer.”

McDonald has made some major sacrifices to make this American journey possible.

“I sold my car and all of my racing things back home,” said McDonald. “It paved the way for me to come here. We’ll see how this year goes; I might keep this car here and come back or send it back over to Australia”.

McDonald has a YouTube channel that he uses to keep racing fans all over the world updated with. His channel on YouTube is called “ZacMac,” and he plans to produce lots of content about his journey in America.

“Mandee Pauch has given me some YouTube advice as well, it’s helped how I do things for the channel,” added McDonald. “It’s hard to do sometimes because it’s just me. Having to do things for the racecar and racing in general while keeping the channel going can be a challenge.”

McDonald has had some hard luck in his first few outings, but was in the process of having solid runs in his 51a when his hard luck has occurred. In an age where drivers like Peter Britten and Kerry Madsen have come from Australia and had success, McDonald is looking to follow in their footsteps, but to also enjoy the moment. There is a good chance you might see ‘ZacMac’ at your local track as he looks to race on as many tracks up here as he can. McDonald’s enthusiasm is contagious, and one can’t ignore his positive mindset and ambition to succeed. With these traits behind him, McDonald is set to find success and live out his dream of racing against the best the American scene has the offer.