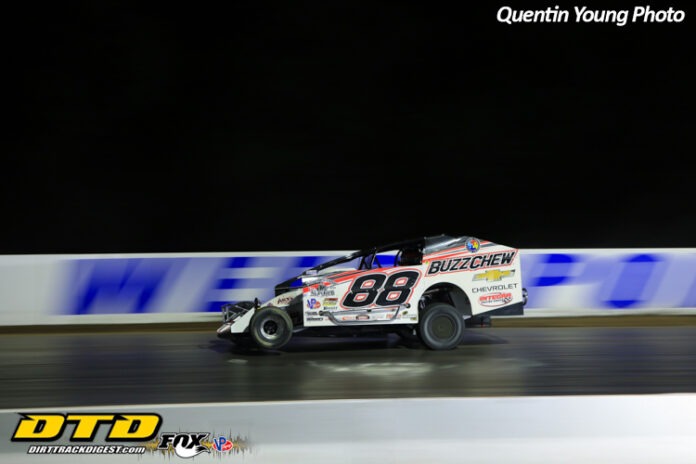 43 Big Block Modifieds checked into the Weedsport Speedway on what was originally a cloudy day. It seemed as if no racing may happen at all.  However, radars around 4:00pm began to show rain showers headed for the Weedsport Speedway, but fortunately for race teams and fans the rain dissipated before it reached the Speedway.

The 43 entrants were reduced to 28 cars for the green flag of the Heroes Remembered 100. The front row consisted of Weedsport promoter and Super DIRTcar Series regular Jimmy Phelps and Billy Decker, and these two veterans used their experience at the speedway to their advantage. Phelps pulled an early lead over Decker in the first handful of laps, and the pair put a sizeable gap between themselves and the rest of the field.

Decker was not willing to sit in second.  Decker battled side by side with Phelps for a handful of laps before stealing the lead away on lap 15 from the promoter-driver. Decker wasted no time in pulling a straightaway advantage on Phelps, and the Franklin Flyer handled lap traffic with ease.

Behind Decker, an all-out brawl was occurring for various positions. Phelps, Williamson, Stewart Friesen, Larry Wight, Justin Haers, and Matt Sheppard all battled for positions two through six at some point during the night. Sheppard, who started third, quickly found challenges from Friesen and Wight, who worked their way around the No. 9s. Sheppard ultimately fell a few car lengths behind the other drivers in the battle to come home in seventh.

After working their way around Sheppard, the rest of the drivers locked horns as the race progressed. Williamson struck quickly and efficiently in lapped traffic to pass Phelps to take second at halfway, and Haers passed Phelps for third in almost identical fashion. Phelps then found Wight and Friesen knocking on the door for the fourth spot, and the three battled it out not too far behind Haers, but Williamson had already gapped the rest of the field and was making progress on cutting down Decker’s lead. Meanwhile, further back, Mike Mahaney was closing in on the lead pack. He had moved into sixth place from his 12th place starting spot, and was quickly becoming a contender for the podium.

The race was dramatically changed by a series of two cautions. The first came on lap 83, as Todd Root broke on the back straightaway. As the field took the green flag for the restart, Williamson sailed into the top side of turn one ahead of Decker, and the Buzz Chew No.88 of Williamson pulled multiple car lengths on the Gypsum Racing No.91 of Decker as the field worked to complete lap 84.

On lap 87, Root spun in turn four for another caution, bunching the field up one last time. Mahaney’s night came to an unfortunate end as the No. 35 machine broke under the yellow flag. The second restart mirrored the first restart, with Williamson driving back away from Decker. Lap traffic nearly played a factor again. Williamson got mired in the back of the field with a handful of laps to go, allowing Decker to close within a car-length of Williamson. It was not enough, however. Williamson held on to claim the victory.

Behind the battle for the victory the race for the final podium spot intensified. Haers held third place for most of the race, but he faced many challengers. Friesen and Phelps were the biggest threats to Haers, with Wight closely following. Haers ultimately lost third to Friesen, who made a last lap pass to secure the final podium spot. Haers’ fourth place run was an impressive outing for the driver out of Phelps, N.Y., even more impressive when considering the circumstances he faced. Haers’ left front tire went flat coming to the green on the first restart.  Haers preserved for an impressive top five that saw him finish ahead of many series stars. Phelps took fifth place at the line after a challenge from Wight.

Williamson was relieved and elated to be back in a Super DIRTcar Series victory lane.

“We went back to basics tonight,” said Williamson. “We needed to get back into our winning ways. Buzz Chew gives me great equipment every night, with Bicknell Racing Products and Billy the Kid Racing Engines, it’s hard to beat it. I tell customers a lot that the setup we give them is very good, and to not chase ‘magic setups.’  We were chasing magic, trying to stack springs, and run lockouts. Tonight, we ran our standard deal and it paid off.”

While the Weedsport Speedway was wide and had many racing grooves, lapped traffic still proved difficult for many drivers including Williamson.

“I talked to Billy up on the hill about it,” said Williamson. “I was happy to hear that he was dealing with the same difficulties I had in lap traffic. When I was coming up in the series, I was told that drivers appreciated the fact that when we were slow, I knew it and got out of the way. I wish we got the same respect from a driver tonight.”

Decker finished where he started in second place but was understandably frustrated. Decker dominated most of the race and was incredibly close to taking the lead back in the last few laps. There was no doubt that Decker could have easily won had the cautions not come out

“I picked the wrong lane for the restart”, said Decker in victory lane. “I’m just frustrated about that. We had a really good car.”

Friesen had a very up and down night. Friesen started fourth but had fallen back to seventh place for a short while during the race’s middle stages. Friesen rallied to bring home a solid third place finish.

“We unloaded fast here tonight,” said Friesen. “We fired off really good in the feature as well, but I knew it was going to be do or die on the top. We were really fast up there early, but we burnt off for a bit in the middle of the race, I probably overheated the tires. The cautions got us back in a good position to make moves and get into third.”

Friesen also noted the difficulty of passing traffic at the Weedsport Speedway.

“It’s just hard to pass lap cars here,” said Friesen. “The lap times us leaders are running versus what they are running are not that far off. We can be running faster times but not gain any meaningful physical ground on them.”

Friesen’s NASCAR Camping World Truck team brought home a fourth place finish on Friday night during their race at Charlotte. Despite the major differences between the truck and a modified, the truck team has helped Friesen achieve success in the Modifieds.

“The truck team is a good group of guys to bounce ideas off of,” said Friesen. “Even though the truck and the Modified are so different, we can get some ideas from our engineers at the truck team. All of the spring and shock theory tends to be pretty similar across almost all disciplines of racing, so even though they aren’t into the Northeast Modified scene, they can give us some good ideas.”

The Super DIRTcar Series hustles to Lebanon Valley Speedway on May 31st for the Mr. Dirt Track at the Valley of Speed, before taking a short break to prepare for the first scheduled trip north of the border to Canada since 2019 at Cornwall and Le RPM Speedways.

News and Notes for the Super DIRTCar Series

Friesen was not originally scheduled to run this event at Weedsport. The team was planning on Penn Can for the Short Track Super Series ‘Clash at the Can’, but rain pushed that event to Tuesday, allowing the Halmar-Friesen Racing team to come north instead.

Danny Johnson was in attendance with the Tyler Siri owned 27j he campaigns at the Outlaw Speedway. Danny’s previous attempt to race with the Super DIRTcar Series came at Bristol, where he drove the Team Comfort Racing 27j before suffering engine problems that ended his week at the ½ mile speedway early.

Gary Tomkins also attended Weedsport for the Super DIRTcar Series event with his No.84. Tomkins made the trip down to Bristol in April and enjoyed a sixth place run on the first night of competition there. Unfortunately, the 2004 Super DIRTcar Series champion saw his night come to an early end. After winning his Last Chance Qualifier, Tomkins pulled into the infield right at halfway in the 100-lap feature event.

Tim Fuller also had a difficult night. The winner of the Bridgeport Super DIRTcar Series race and runner-up in the Can-Am Speedway event found himself starting towards the back of the 28-car field. Fuller pulled off around lap 30, finishing last overall in the event.

A few small-block Modifieds arrived to compete with the big blocks at Weedsport tonight. The most notable driver with a small block was Todd Root. Before breaking on lap 83, Root was putting together a very solid run in his No.15 machine. He showed speed in his heat race and was running fairly well when his race came to an end.

Mahaney ran at Weedsport with a different right side body after an accident at Fonda on Saturday did damage to the No.35 machine. The team has had some tough luck lately, as the team suffered engine issues at Orange County on Thursday, in addition to the accident at Fonda. Under the lap 87 yellow, the No.35 began throwing large amounts of sparks out of the rear end before the car broke down at the entrance to turn one.

The CRSA Sprint Car race that accompanied the Heroes Remembered 100 was one for the ages. The race was a wild affair which saw Bobby Parrow and Darryl Ruggles throw slide jobs at each other in thick lapped traffic as the race wound down. A caution and a red flag set up a green-white-checkered to determine the winner.

Ruggles stayed with Parrow but his car pushed up the hill in turns three and four, allowing the Empire Super Sprints Hall of Famer to take the win. It is his second CRSA win in a row, as Parrow took the win at Land of Legends Raceway two weeks ago.

I talked to Parrow earlier in the night, and he told me the team was worried about the engine in the Tom Fletcher owned No.53, which had issues the night prior at Canandaigua as I was told. It seems as if those issues have been resolved for the team, as Parrow made his way up to Ruggles from the 11th place starting spot primarily using the top side of the Weedsport Speedway, which still had a considerable amount of moisture left in it.

The DIRTcar Sportsman event finally saw Matt Guererri break through for his first win at the Weedsport Speedway. The Land of Legends regular and Owner/Operator of ImageX Graphics won his heat, started on the pole, and never looked back as he cruised to victory. It has not taken ‘Gibbz’ long to pick up in 2021 where he left off in 2020, coming off a year where he claimed his first track championship at the Land of Legends.

Weedsport Speedway returns to action on June 13th for the 75-lap Sportsman Classic which sees the DIRTcar Sportsman take center stage. Modifieds will also return, for a Big Block vs 358-Modified challenge. 600cc Micro Sprints will complete the card for the night’s racing action.