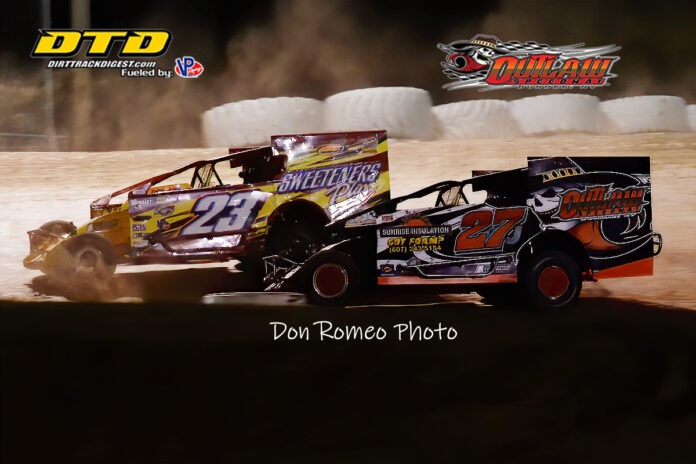 The rain stayed away at Outlaw Speedway on Friday night, despite what morning radar screens forecasted. It was a warm and beautiful evening for racing in Dundee, N.Y. While the weather may have smoothed itself out, the Modified feature was one of calamity. Kyle Coffey managed to survive a battle of attrition and dodge the chaos around him to claim his second win of the year at Outlaw.

Billy Paine and Jeffrey Daugherty led the field to the green flag. Daugherty initially challenged Paine in the opening stages, but Paine drove away from Daugherty in convincing fashion. In just 5 laps, Paine had opened a straightaway lead on the field. Paine worked the bottom of the 4/10ths mile facility, with Daugherty falling into the hands of Ron Cartwright Jr. and Danny Johnson. Cartwright quickly found a way around Daugherty with the Doctor in hot pursuit. Kyle Coffey was also beginning to enter the mix, as he was able to secure fourth during the initial green flag run.

As soon as the race seemed to find its rhythm, the caution flag flew to disrupt it. The first caution came out on lap eight, with Derrick Podsiadlo slowing. On the ensuing restart, Paine was immediately contested for the lead by Cartwright and Coffey. Cartwright powered around the outside of Paine on lap eight, but Paine was not left in the dust. Paine and Coffey dueled immediately behind Cartwright for second, with both drivers racing on extreme sides of the speedway. Paine went as low as possible searching for bite on a slicked off racing surface, while Coffey was inches away from leaving said racing surface on the top.

Just as it seemed the battle for the lead was going to heat up, it all quickly came apart on lap 15. Cartwright started sliding in a half spin as the field entered turn 4, and many cars were collected in the ensuing calamity on the frontstretch. Paine, Johnson, Daugherty, and Podsiadlo were all collected in the mini-pileup, however, all cars drove away with little to no damage. The Doctor made a trip pit side for a quick check-up on his 27j machine, which had taken a hit to the front end after contact with a spinning Cartwright.

The field restarted shaken up drastically as a result. Coffey held the lead while Phil Vigneri III and Eric Williams slotted into position behind Coffey. The rest of the race ran to the finish green, as Coffey took a dominating win over Vigneri, who had a sizeable gap to third place. The battle for third was a wild one. Williams held third for a few laps, but quickly found a challenger in Bobby Varin. The pair dueled side by side, with Varin eventually coming out on top after a few laps. Williams then faced challenges from a resurging Johnson and Steve Paine. Williams was unable to resist the Doctor’s house call and the whirlwind speeds of the Hurricane, as they passed Williams to finish fourth and fifth respectively.

“We’ve really dialed this car in here over the past few seasons,” said Coffey. “We’ve figured out what this place is usually going to do on a given night, and we know how to adjust for it. Tonight, we made little adjustments here and there to what we had, and it worked incredibly well. We got a bit lucky to miss the front stretch accident, those deals just kind of happen super fast.”

“We had a really good car from the drop of the green,” said Vigneri. “We were making a line in the middle work that no one else really seemed to find. Attrition helped us a little bit, but we had nothing for Kyle, he was just gone. We’re really happy with second.

“We plan to run Outlaw weekly Fridays from here on out”, said Vigneri, who prior to tonight had only made a few starts at Outlaw. “We have this on Fridays and a Sportsman team I am running for on Saturdays at Genesee. It feels good to be racing two nights a week, given what happened last year with COVID-19.”

Bobby Varin came from starting shotgun on the field to bring home the final spot on the podium.

“I wasn’t able to get here in time to run a heat, so we had to start tail,” said Varin. “We put last week’s feature setup in and it was a little off. We had no Sprints this week, so the track was a bit faster than normal. The car was still good though, and while we did gain a few spots through attrition it was a good run.”

Varin, a longtime journeyman driver, has more than a fair share of commitments in his work and racing lives, which can make things difficult.

“It’s a lot to handle,” said Varin. “With the Supply Wagon Rentals business we have, we do a lot of graduation parties and weddings, so we’re in a very busy season. It can make it hard to get to the track sometimes. Tyler (Siri) has been a good friend of mine for years, I really enjoy running his stuff. It’s usually good racing, and he enjoys me being here.”

Other News and Notes from Outlaw

Until the lap eight caution, Billy Paine looked all but set to win the Modified feature if it went green the rest of the way. But as luck would have it, the caution flew setting up the series of events that le to Paine being collected in the lap 15 melee and send him to the back of the field.
Paine recently moved up to the Modifieds full-time a week ago from the Sportsman class, and his reasoning is quite simple.

“It’s really, really fun,” said Paine. “Every lap in a Modified is so much fun. It’s quite a bit faster than a Sportsman on the straightaways. So far, we’ve had a lot cleaner racing with the Modified field here. We were getting involved in a lot of accidents in Sportsman, namely on the night of the Short Track Super Series race here. It wasn’t our plan to move me to Modifieds this year, but after that, we decided it was time to make the move.”

Tyler Siri looked to try and make an already tight Modified point race closer with a good run; however, the Promoter of the Outlaw Speedway would not have the best night. Early on in his heat race, the No. 5* bellowed plumes of smoke, as the engine quickly turned into a very expensive fog machine. Siri would start and park the feature event in Stacy Jackson’s 22j Sportsman car to lessen the points blow.

Eric Williams’ sixth place run may be in thanks to a new car he raced tonight.

“This car we bought from Kyle Coffey in January,” said Williams early in the night. “We decided to take the purple car apart.  We think that car was getting lapped out for us. We have a new motor that is really powerful, I just have to figure out how to get it to the ground good.”

Williams has had no shortage of hard luck in his modified career, but it seems that things are turning around for him and the team. A sixth place run for Williams was capped with Zac McDonald bringing home another top three in the Hoosier Sportsman car fielded by Williams and McDonald, making it a good night for the team based out of Horseheads, New York.