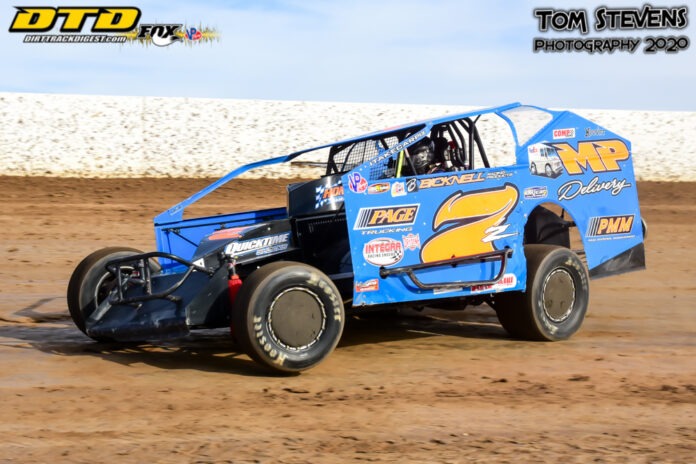 The Sportsman Classic has become one of the Weedsport Speedway’s new traditions since the reopening of the speedway. Weedsport has always been known as the home of Modified racing in the Northeast, and it’s only fitting that the Modified’s baby brothers get their day in the sun. One of the strongest fields of Sportsman filled the Weedsport pits, and one of its rising young stars in Zach Payne took home the largest win of his career in one of the division’s crown jewel events.

40 Sportsman Modifieds unloaded at the Weedsport Speedway for a chance at the $2,500 grand prize. The field was nothing short of one of the strongest fields of Sportsman ever assembled. Some of the notables included Weedsport’s most recent Sportsman winner Matt Guererri, and Matt’s older brother Nick. Alex Payne won all three races he ran earlier in the weekend at Outlaw and Land of Legends, looking to complete a 4-race weekend sweep at Weedsport. Western New York was well represented, with Noah Walker and Brett Senek making the trip east. Zach Sobotka, who was a contender to win in every race he ran, also made the trip.

Nick Guererri and Brett Senek led the 30-car field to the green flag on a very tricky Weedsport Speedway surface. Guererri quickly got comfortable on the bottom groove and went on to lead lap one. Guererri was not allowed to get in a rhythm and pull away, however, as Zac McDonald and Tony Finch spun in turn three to bring out the first caution lap of the night. With caution laps counting until ten to go, the field came back to the green flag on lap six.

On the lap six restart, Zach Payne became an immediate factor in the race for the lead. Payne was able to get around Senek to claim second place, with Senek settling into third. Payne reeled in Guererri and settled in second place for a handful of laps, waiting to make his move. His time came as the leaders came into lap traffic. Payne made the move for the lead stick on lap 21, as Guererri tried to tiptoe around a lap car on the top side.

Guererri then fell into the hands of Senek, who slid under Guererri to take second place. Senek and Guererri were slowly cutting into Payne’s lead when the caution came up on lap 30 for Mike Fowler. Fowler was having a good run inside the top ten and had won his heat earlier on in the night before he came to a stop in turn 3.

The field took the green flag again at lap 33, and Matt Janczuk made the most of the opportunity. As Payne began to create a gap, Janczuk blitzed his way into second place around Senek and Guererri. Senek fell back behind Guererri, as Guererri slid back under Senek to move back onto the podium. Just as Guererri completed the pass, Josh Livingston spun into the infield to bring out another yellow on lap 38, narrowly missing the inside jersey barrier in turn 4.

The lap 41 restart saw Payne scamper away from the field again, but only for 5 laps as the yellow flew on lap 46 for the race’s second multi-car incident. Riley Rogala and Cody Manitta made contact, sending Manitta spinning into the path of Jason Reome, who made hard contact with Manitta. Manitta was able to continue.

The field quickly fired back off racing on lap 49, with Payne continuing to create his own zip code while Janczuk and Guererri followed in tandem. Behind the top three runners however, a youth movement was brewing. It was a tale of two Tyler’s. Tyler Murray and Tyler Corcoran were cutting their way up into contention with Janczuk and Guererri. Corcoran had made his way up from ninth to slot behind Murray, as they ran sixth and seventh at the restart. From there, the two went to work. Murray had an intense battle with Alan Fink, who was quietly settled into fifth at the time. Murray found a hole entering turn three and made a move for position stick, with Corcoran seizing the opportunity to shuffle Fink back to seventh.

Senek was next in line as the field started lap 54. Murray tried to make a daring move to the inside entering turn three, but contact was made between Murray and Senek in the process. Both drivers managed to save their cars from spinning in an impressive show of car control. Spins from either driver would’ve caused a major pileup. One lap later, Murray made the move stick, with Corcoran again following Murray through to take a top 5 away from Senek.

The field clicked off laps like clockwork, and lapped traffic appeared as if it was going to create a fight for second between Janczuk and Guererri, but Dalton Rombaugh spun in turns one and two to bring out the night’s final caution on lap 64. On the restart, Payne  drove away, and the field settled in on the bottom. Payne would comfortably take the Sportsman Classic over Janczuk and Guererri.

With Payne taking the lead early and dominating the rest of the way, Payne focused on being smart and safe on the race track.

“About a quarter of the way through the race, I figured out the track was locking down on the bottom,” said Payne. “You couldn’t miss the bottom. You had to be careful in lap traffic to not lose position. I kept my eyes on the lap cars and tried to keep my distance. Once I caught them, I’d wait for them to make a mistake and pass them quickly. We were a bit worried about tires, so at the end I was nursing the car home. The tires actually weren’t too bad, so it wasn’t as much of an issue as we thought.”

Janczuk brought home a stout second place run. Janczuk started fifth, and despite his good run, was fighting a race car he did not like.

“By the end, it was just trying to survive and hold onto second,” said Janczuk. “Zach was just really good. They hit on it tonight with their car. They had the car to beat and earned that win. We were able to stay in the top 5 pretty good, I thought we might’ve had something for Zach, but we smoked the rears off by the end. I wasn’t very comfortable with the car at the end, so I’ll happily take second.”

Guererri started on the pole and was shuffled off the podium early, but it did not deter the driver from Waterloo, N.Y. Guererri’s motto has always been “No Weak Links”, and he lived by that motto, fighting his way back to third and nearly claiming second.

“The car was really good, we started on the pole and felt pretty good with the car and our position”, said Guererri. “We got into lap traffic and I was just following them for a while. I tried to make a move to get around them, and that’s all it took for guys to get around me. We just couldn’t get back past them. I knew we couldn’t get off the bottom, which is not how this track usually is. I stayed down there and we passed a few guys who made mistakes and slipped up the track. We just didn’t have enough racing room to get any further.”

Other News and Notes From The Sportsman and the Modifieds

Tyler Murray’s fourth place finish was not in his usual No.1m. Instead, he was piloting the familiar No.34 owned by Kevin Root.

“Kevin asked me if I wanted to take the car out on Saturday at Fulton,” said Murray. “Mark Yorker and Kevin have been chasing handling issues so far this year. We took it to Fulton Saturday and tried some things and we were running well. We came up from just inside the top 10 to second and I thought we could win, but we broke a left front axle bracket and had to pull off. We’re here tonight to see what we can do.

“I’m not sure what the plan is yet”, said Murray of potentially driving the Root car in the future. “We’ll see how we run tonight and see what happens from there.”

Larry Wight put on nothing short of a wild show in the Modified race. Wight, who by the luck of the redraw started 12th, made his way to fifth by using the extreme top side of the Weedsport Speedway. Wight bounced his right rear quarter panel off the outside wall every lap in what seemed to be shaping up as a potential top three for the driver. However, the Lightning Lane was not very kind to Wight’s right rear tire, which blew in spectacular fashion as Larry entered turn three. Wight saved the car from hitting the wall, but took a light hit from Roy Shields, who was committed to the top-side when the tire gave way. He was able to slow the car down a considerable amount, but not enough to avoid tapping the left rear of Wight’s car.

Kevin Root brought out a Bicknell chassis to race with the Modifieds tonight at Weedsport. Root, who has had highs and lows in his Modified season, had one of his highs tonight. Root won his heat race by a few car lengths over Erick Rudolph, carried that success into the Modified main-event. Root was temporarily passed by Wight and Jimmy Phelps. However, Root gained a spot back when Wight lost his tire, and then passed Phelps back when Phelps tried to work the high groove in the closing laps. The chassis switch may mark a turning point in Root’s Modified season.