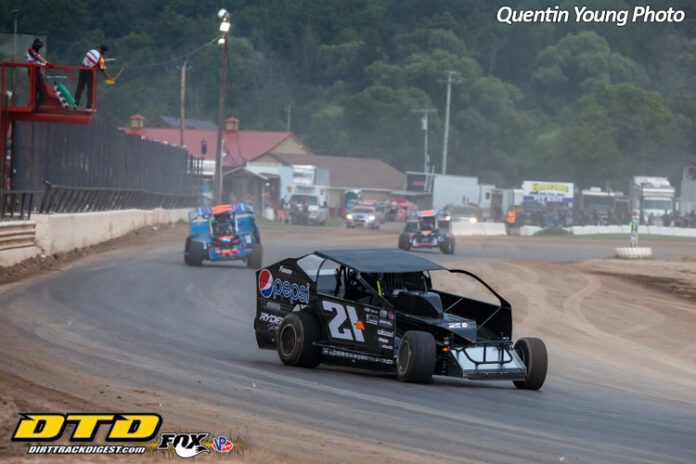 Mother Nature added another event to her long list of rainouts, as the Super DIRTcar Series and the Empire Super Sprints were forced to postpone their last chance races and feature events due to a torrential downpour. Despite the rain, there were still some things to make note of on the rain shortened night.

Some Super Dirt Week announcements were made at the drivers meeting. A Tuesday practice has been added to allow the Wednesday practice to be shortened so teams can have more time to load up and head south to attend the Weedsport Speedway satellite show. The most important note was the announcement of a four lap caution at lap 100 during the Billy Whittaker Cars and Trux 200. This is for the drivers without quick fill fuel systems to be able to fill their cars up with fuel to run the full 200 lap distance. This is a change in tradition for the event, which has featured live pit stops for most of its existence.

The end on the border closure is finally in sight. It was announced at the drivers meeting that the border will reopen on August 9th. However, the Series will not be racing in Canada this year. Series officials cited the requirement of a vaccine to cross as their reasoning, looking to prioritize drivers personal choices. At minimum, this hopefully means the return of some of our dearly missed Canadian competitors to tracks across New York.

A few Super DIRTcar Series drivers expressed concern over some of the abrasive surfaces that have been seen at many tracks, regardless of location or series affiliation. The plague of rubbered up racetracks has accelerated concerns over the very high potential for a tire shortage in the near future. It is no secret that tire shortages are already starting to occur, with the most recent Short Track Super Series event acknowledging the shortage on the American Racer side of the spectrum. Hoosier has been a different story, as the company is larger than American Racer, but Hoosier has publicly stated that they expect a shortage to occur if measures to conserve tires aren’t taken. While it doesn’t appear to be a ‘code red’ situation yet, it is far from ideal.

While the heats for the Super DIRTcar Series and Empire Super Sprints mostly featured regular stars taking dominating heat wins, there were a few pleasant surprises. Peter Britten backed up his fast time with a dominating heat win, continuing Britten’s streak of good runs in the series so far this year. On the Sprint Car side of the night, Bobby Parrow had his best 360 run of the year, bringing home a solid second place run to make the redraw before the rain.

The new dates for the makeup races are still TBD.