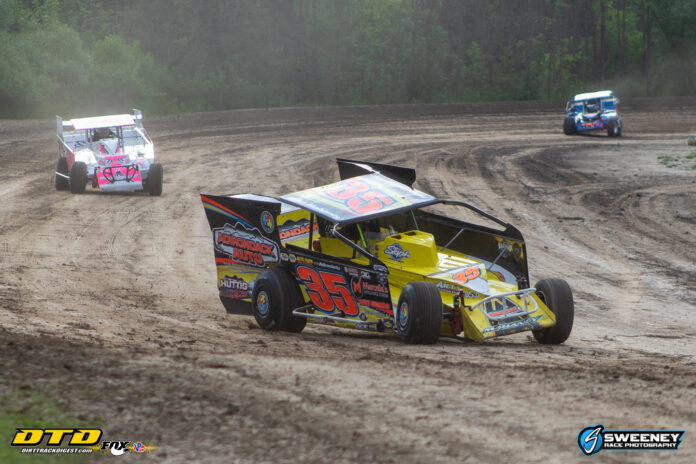 The Short Track Super Series rolled into the Utica-Rome Speedway for the first time on Thursday night for the Richie Evans Remembered 61. With the Evans family in attendance, the event was packed with orange shirts in honor of the Rapid Roman who took nine NASCAR Modified championships in his career. The now dirt-covered Utica-Rome Speedway provided good racing all night long and some interesting notes as the night moved along.

Short Track Super Series officials mandated all Modifieds in the pits pass a pre-race technical inspection. The inspections, held on the scales next to the pit shed, checked the dimensions of the body. It isn’t surprising that these inspections were made, given the speed, aerodynamics are very much in play at a track like Utica-Rome. Many drivers were held up at the shed for body height infractions of various types. Sail panel heights, deck heights, and door heights were all things that drivers were told to change before going racing.

Many drivers seemed to be trying out some aerodynamic ideas. A few drivers not only ran door extenders but had an offset of about one inch on the right side from the regular door size, presumably to create just a little bit more side force to get the car through the corners. The Teo cars have been running new body mounts that appear to be adjustable all year, and many of them were in attendance tonight.

At the last Short Track Super Series event at Bloomsburg, Brett Deyo told drivers that the series was just about out of tires, a result of the tire shortage that has been brewing for months. There was not a lot of talk about tires tonight. Nothing was said in the drivers meeting, and while the Andy’s Speed Shop trailer didn’t seem to have a ton of tires, they had at least some sticker tires for drivers to buy. 48-compound tires, one of the dominant right-rear tire compounds, should be arriving from American Racer to distributors this week, based on Deyo’s words last week and other speed shops and tracks saying the same. The tire shortage is here, but outside of a few tracks rescheduling unsanctioned races, it hasn’t really hit the Short Track Super Series or the Super DIRTCar Series just yet.

The track surface was a welcome departure from the seemingly endless trend of tracks locking down with a groove of rubber. It was a welcome sight for fans and drivers alike, as rubbered down racetracks often create single-file racing and wear tires out very quickly, which is not ideal when the Modified world is dealing with a tire shortage. The Utica-Rome Speedway slicked off nicely with a cushion on top and moisture on the bottom. It wasn’t a massive cushion like the ones seen in the Midwest, but it was there and used to the advantage of many drivers.

For some, however, it was a disadvantage of sorts. Many Modifieds dipped off the top of the speedway in turns one and two in the heat races, and Elmo Reckner got the worst of it in the first consolation race. Reckner caught the cushion wrong in turn one, going over the cushion and entering a violent barrel roll. Reckner was okay, but the car was not. Rocky Warner dipped off the top side of turns one and two a few times in the feature, but it wasn’t enough to slow him down. Warner brought home a third-place finish in what many would call one of the strongest races of his career.

While the feature event didn’t include any major accidents, a few drivers were taken out by mechanical failures. Billy Decker broke on lap one after a heat race win and a strong performance in the dash against eventual race winner Stewart Friesen. Marshall Hurd and Ronnie Johnson both pulled into the infield, the former bringing out a caution in the process. Under said caution, Mike Mahaney pulled off with a broken axle, ending what was looking to be a promising run for Mahaney, who has continued to be one of the most consistent drivers of 2021. A win is surely on the way for Mahaney and crew.