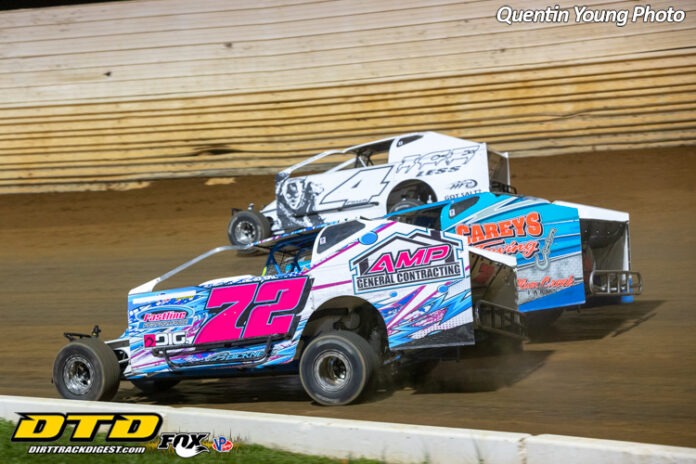 Ajay Potrzebowski II had a breakout season in 2021. He took the track championship at Outlaw Speedway in their DIRTcar Hoosier Sportsman class, taking the Mike Jackson Memorial back in May to accompany title. He was also named the DIRTcar Sportsman Rookie of the Year.

On top of all of this, Potrzebowski finished second in the Short Track Super Series South Region points, with a tour win coming at the Delmar International Speedway in Delaware.

After a strong season for the young driver, Potrzebowski has decided it is time to move up to the Modified ranks.


“We had a good year last year, so we decided to move up. We decided we were going to about two weeks ago, and we started working on doing that last week.”

Potrzebowski has purchased an ‘open’ motor for the 2022 season. This move separates Potrzebowski from some of his competitors who have also moved up from sportsman to the modified class. A majority of teams that decide to move up often start out in the DIRTcar 358-Modified class, with a W-16 or spec head engine. For Potrzebowski and his team, that simply was not practical.

“We’re going to run Outlaw on Friday’s and the Short Track Super Series North Region as well. We were thinking about the 358’s, but there’s only one or two tracks near us that run those. On top of that, those 358 tracks are two-hour rides for us, it would be a lot of expense for not a lot of racing. With where we are, we can run at any of the tracks near us that follow an open motor rule. It opens our options up for racing quite a lot.”

Potrzebowski will move to the Modified class in a brand new 2022 Teo Elite. Potrzebowski competed in 2021 with Bicknell cars. Despite finding success with the Bicknell chassis, the relationship Potrzebowski has with Teo was more than enough for the team to switch over.

“The guys at Teo are phenomenal. They have very good technical support. We’ve been great friends with them, and they reached out to us. After my dad (Ajay Potrzebowski I) had his big crash at Outlaw, they reached out and helped us get back together. We decided earlier this year we were going to switch at the end of the season.”

Potrzebowski intentions extend beyond simply getting seat time in 2022. Potrzebowski and his team are not only looking to finish races with a clean car; they’re looking to load some hardware up in the hauler as well.

“We should be able to contend at Outlaw, we want to get a win there for sure. It would be super cool to do that. I feel that if we can get a win somewhat early and run as well as we hope, we could contend for a track championship there. We’re here to compete.”

The move to the Modified class does not mean the end of Sportsman competition for the Potrzebowski. Potrzebowski still plans to make an occasional appearance in the class when good money is on the line.

“We’ll still have a crate car sitting around for the bigger shows. We want to run the Mike Jackson Memorial at Outlaw again, hit a big show here and there. We might even run DIRTcar shows with that car.”