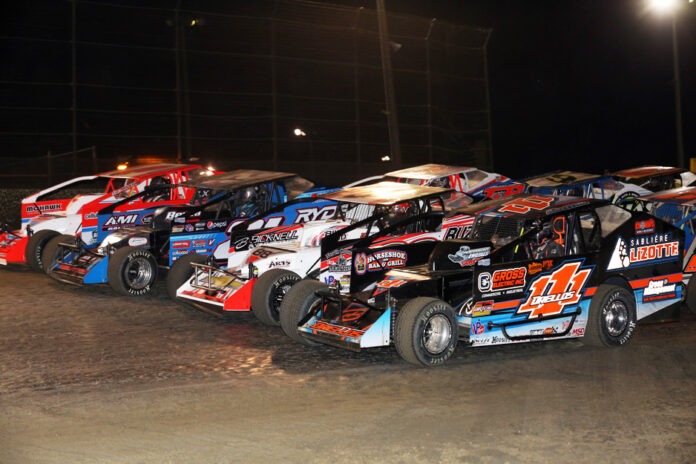 The off-season is over, if there ever was one.

It seems like motorsports never takes time off anymore. Regardless of the season or time of year, racers are going to find a way to race. The Modifieds just wrapped up their trip in Florida, and some of them are headed north to race for some big money. With it being very cold in Oswego, I’m taking my mind to warmer places with some Modified predictions for the 2022 season.

There were some big shake-ups in the offseason for the Super DIRTcar Series. The series has expanded their reach after a 2021 schedule that restricted the tour to New York. The series is set to return to the states of Ohio and Pennsylvania in 2022. These trips to Ohio’s Atomic Speedway and to Pennsylvania’s Bloomsburg Fairgrounds Raceway as well as the Big Diamond Speedway are a welcome change of pace from last year’s schedule.
These tracks should spice up the championship battle this year. Recently, the Super DIRTcar Series has largely been fought for by three drivers: Matt Sheppard, Mat Williamson, and Stewart Friesen. This may no longer be the case. Short Track Super Series regulars Anthony Perrego and Mike Gular are joining the tour for 2022. Jimmy Phelps won his first small and big gators just a short while ago in Florida. For the first time in a few years, Phelps has a teammate at Heinke Baldwin Racing. Max McLaughlin has returned to the HBR stables and quickly found his way to victory lane in Florida. There’s going to be stout competition this year on the tour, especially when you factor in drivers like Larry Wight, Chris Hile, Erick Rudolph, Jack Lehner, Peter Britten, and Tim Sears Jr. to name a few. Plus, there’s many other rising stars who will throw their hat in the ring at a Super DIRTcar Series race this year.

Out of all these drivers however, who comes out on top? It’s a very tough decision, given all the talent. But, regardless, Matt Sheppard is still the driver to beat on the Super DIRTcar Series tour. He’s been dominant in the modified scene for at least a decade, and ‘Superman’ has not found his kryptonite just yet. He certainly won’t have it easy. Williamson is always hot at the end of the year, and the powerhouse combination of Four-Star Motorsports and Perrego could be fearsome. However, Sheppard is one of the most consistent drivers on the tour, and it is this consistency that will continue to bring him success.

What about Super DIRT Week? DIRTcar is hoping to make the 50th anniversary of the event one of the biggest yet. On such a big stage, many drivers will rise to the occasion. In what might be the biggest DIRTcar Modified event of the year, it will finally be Batman’s time. Peter Britten has come close almost every year since the event moved to Oswego. There’s no better time for Peter to grab his first SDW crown in the 50th running of the event.

Making any prediction about the Short Track Super Series is hard. There’s a fair number of fast cars on the tour, especially the local racers that always challenge for wins on the STSS North and South tours.

The North Region truly moves further North this year. The Short Track Super Series will race in Vermont for the first time in series history at Devil’s Bowl Speedway. However, the North series will run 6 of its 10 points-paying races at three tracks. Utica-Rome, Fonda, and Orange County all have two events a piece on the 2022 North Region schedule. The outliers, other than Devil’s Bowl, are all places that the North Region has visited before. Outlaw, Accord, and Bloomsburg make up the remaining four races alongside the Vermont trip.

This makes predicting the North Region more about who is the strongest at the three tracks that make up over half the schedule. Billy Decker will be spending a lot of time behind the wheel of a Jeremy Smith Racing car this year, and that car has always been fast at Utica-Rome and Fonda. Matt Sheppard can’t be left out of the equation either; as mentioned before, consistency is a good way to win championships.

However, this might just be the year Mr. Freeze takes his third North Region championship. Stewart Friesen has no conflicts this year between the North Region and his truck series schedule. If you thought the Halmar No.44 was good on Hoosiers and windows with the Super DIRTcar Series, his performance on American Racers and sails is often more spectacular and dominant. He’s weekly or regularly raced all the three tracks that make up over half the schedule. I’m expecting Friesen to take his third North Region title this year, despite challenges from the best.

The South Region has been a toss up over the past few years. The 2021 points race came down to the final event, with Mike Mahaney taking his first title. The last four seasons have seen four different champions: Mahaney in 2021, Stewart Friesen in 2020, Matt Sheppard in 2019, and Ryan Watt in 2018. Friesen is an obvious competitor out of sheer dominance. Sheppard, again, is a consistent machine every week at the track. Ryan Watt has made the move back to Troyer for 2022 and is looking to get back on top of the South Region he’s dominated in the past.

Despite this healthy list of competitors who have won before, I expect the South Region to see its fifth different champion in five years. Billy Pauch Jr. was just on the outside looking in heading into the final race and took two wins on the season. Some bad luck and timing took him out of that championship hunt, but I feel like this is the year that Pauch Jr. claims the South Region. The pairing of Pauch Jr. and Rick Holsten has been lights out since they came together, and it seems inevitable that they will only get faster with time.

The Elite Series is brand-new for 2022, and it comes with some of the biggest money Modified racing has seen in years. It’s going to bring out every single one of the best cars and stars. There’s a fair mix of tracks too. Cherokee is a big curveball for teams to start off with, but the Elite Series features big, fast tracks that many on the tour are familiar with. Georgetown, Orange County, Utica-Rome, Fonda, and Port Royal are all mainstays on the STSS schedules, and it is going to a true test of the best to see who will take the first Elite Series title.

‘Money’ Mat Williamson is a driver that immediately comes to mind. Mat is always good whenever a payday is on the line. Expect him to show up in a big way, especially later in the year at Utica, Fonda, and Port Royal. Stewart Friesen has found success at every track on the Elite Series schedule, and he is easily the odds-on favorite here.

Let’s have some fun though. With the short six race schedule, a single bad race could knock drivers out of championship contention. Mike Mahaney won the South Region with a win while having consistent finishes and a bit of luck. I expect him to contend for the title. What about Ryan Godown? Godown has always been fast, but he turned some heads in a big way last year on the Cajun Swing. Godown is another driver that shows up at the big events, and he certainly could contend. However, while I expect these drivers to do more than just contend with Williamson, Friesen, and Sheppard, I’ll go with a driver that may surprise some.

Erick Rudolph is coming off what some may call a down year. He only scored five top fives in 19 Super DIRTcar Series starts, and only three top tens in seven Short Track Super Series starts. However, Rudolph is a driver you can never count out. He has been hot to start the year in Florida before his accident in Volusia, and 2022 has all the makings of a rebound year for Rudolph. With some consistent finishes and a win, Rudolph can cap off a rebound year in a big way with a big payday.

Jack Lehner has been on a slow and steady coming-up through the modified ranks over the past few years, and he scored a big podium down in Volusia this past week. Look for Lehner to continue his rise and possibly even score that elusive first Super DIRTcar Series win of his career.

There’s a lot of new modified talent moving up from the sportsman class for good in 2022. Ajay Potrzebowski Jr., Tanner VanDoren, and Alex Payne are just a few of the young names making a big full-time jump in 2022. The youth movement is real, and they’re going to stir the pot a fair amount this year. This doesn’t even include drivers like Alex Yankowski, who are young stars that have spent a year or two full time in the modified class already with roaring success.

Don’t forget about the veterans, either. I expect both Alan and Danny Johnson to not only win this year, but grab a big series win or two as well. Steve Paine has been fast at the races he shows up to. It’ll be interesting to see what Pat Ward and Gary Tomkins do this year as well.

The Modifieds take to Cherokee Speedway this weekend for the first Elite Series event. In a few weeks, the Super DIRTcar Series will kick off their season at Atomic Speedway. The Modifieds might be on the road, far away from snowy New York, but time flies. Soon enough, the beasts of the northeast will be right back in New York to deliver what we can all hope is an exciting 2022 season.