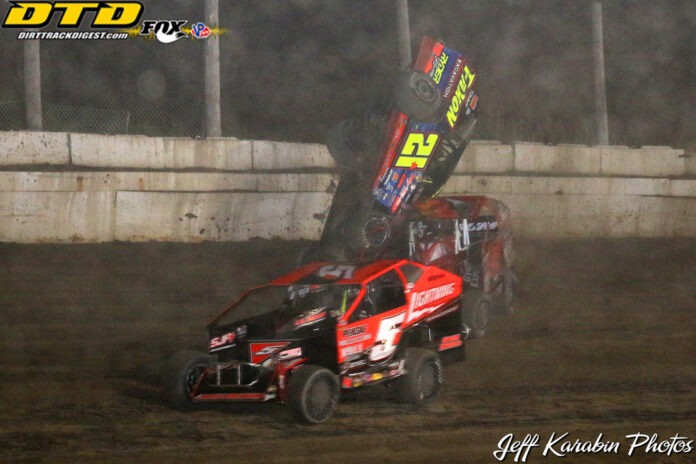 Never willing to give up. Always pushing forward. That’s how you would describe Jack Lehner. Lehner is such a treat to watch at any event. The no quit in them is really fun to watch. While some teams would’ve packed up and went home early, Lehner pushed through to the end of the 100-lap feature event. Bringing home the Bicknell chassis, LJL Kevlar powered big-block home with a top 10 is a great way to end the month of May for the Saratoga Springs, N.Y., native. It was at the beginning of the month that Lehner scored his first ever career win at Fonda. What makes this top 10 so great is that the team suffered all kinds of issues during the race. Racing on three brakes for the last one-third of the event, running out of gas and then having the windshield smashed in when a rock or as the team described “a bowling ball” pounded the windshield.

Did you know? Eddie Marshall is an avid water skier and during speedweeks in February raced in his first ever buoy race in Orlando. Marshall also informed me about the rehab of his iconic race trailer.

“During the offseason we found that the sides of the trailer were bowed out. There was extensive repairs done to the floor and to the walls,” said Marshall.

When asked wouldn’t it have been cheaper to get a traditional 2-car stacker, Marshall paused,“ Well how long would I have to race to pay for something like that” grinned Marshall.

“In ’83 I bought a car from Doug and Budd Olsen and they had Dennis Smith come to their shop and paint the car there. Ever since I’ve been having Dennis paint my cars. Every once in awhile I may need a door or something and I call Dan Pilat, but I don’t know what it would cost to have the car all done in stickers. At this point in my career I don’t think I would switch,” said Marshall.

Don’t look for Stewart Friesen to pilot another NASCAR Cup car in 2021.

“We may revisit that for next year during the Bristol dirt race but not again this year,” said Friesen. “The plan is with the new Cup car coming on board for 22 there is going to be a lot of these 21 Cup cars around and I think NASCAR may use those at the dirt race.”

Friesen also thinks the Super DIRTcar Series will return to Bristol in 2022 as well.

“People from up here came south to support the show. There was a lot of interest in the show so I would think they would be back.”

Friesen is always flying somewhere for his NASCAR adventures. He’s racking up the frequent flier miles for sure.

“I have them all,” said Friesen. “Delta, United, American I got miles on all of them. I use the miles to pay for wifi.”

Friesen was the class of the field for nearly 80-laps until an oil line broke and sprayed oil onto the engine headers which caused a brief fire. Friesen was unhurt in the incident. Friesen is scheduled to be at Penn Can on Tuesday for the postponed STSS event originally scheduled for Sunday but rain washed the event out.

Over 45 Modifieds signed in for the Super DIRTcar Series event. The event was held on Memorial Day and will also be hosted again in September on Labor Day weekend. That event will pay nearly double what this event paid to win. In years gone by, Memorial Day Monday was reserved for an annual appearance of the World of Outlaws Sprint Cars which usually led to standing room only attendance.

Max McLaughlin was piloting a second KFR entry on the night. McLauglin had fought his way back from an early race pit stop on lap 24 to fix a shock that had fallen off the birdcage on the left rear to a position inside the top 10 when late in the race the radius arm mount broke off the frame ending his epic run through the field.   McLaughlin is scheduled to race at Penn Can on Tuesday in the Norm Hansell 357 entry.

Andy Bachetti, who started 9th in the 100 lap affair, was an early race contender for the lead after running down the leaders. However with about 20 to go in the feature, the driveshaft failed in his car. A dejected Bachetti thanked the service members who made the ultimate sacrifice that enables him to race for a living in his post race comments.

An ugly flip by the likable Australian Peter Britten who now calls Weedsport, N.Y., his home. On lap 78, Britten flipped in turn one with the car coming to a rest on all four wheels. Britten was able to exit his car under his own power. Britten was also involved in a harrowing crash to start his season in Florida. The damage to that car was so severe that they literally had to cut the car into pieces to be able to load it into the hauler to bring home.

Britten indicated afterwards he was sore.  He believes something broke on the suspension when he went into the corner as the right rear of the car just dug into the track.

In late breaking news on Monday morning it was announced through various social media outlets that iconic car owner Dieter Schmidt had passed. Schmidt had owned and fielded the iconic Lincoln Autobody No. 5 car which has had a virtual all star list of talent behind the wheel. Laubauch, Cozze, Hoffman to name a few that were fortunate enough to be able to pilot the famed car.

Ronnie Johnson returned to the Valley for his first race of the season there after competing there full-time in 2019, and the short 2020 season. When asked what sparked his ambition to race at the Valley, Johnson said “We have the equipment for here. We race for fun these days.”

Johnson authored an excellent run until a flat left front tire with just a few laps to go caused him to go from fourth to ninth at the stripe. RJ has decided to call Fonda Speedway his home for Saturday nights in 2021.

The Super DIRTcar Series next race is also in the Capital District of New York. Its the Horsepower 100 scheduled for June 22 at Albany-Saratoga Speedway in Malta, N.Y. There has been no word on what will become of the Canadian series dates that are set to kick-off on Sunday, June 27th at Cornwall. The US Canadian border is closed to any leisure traffic until at least June 21st.