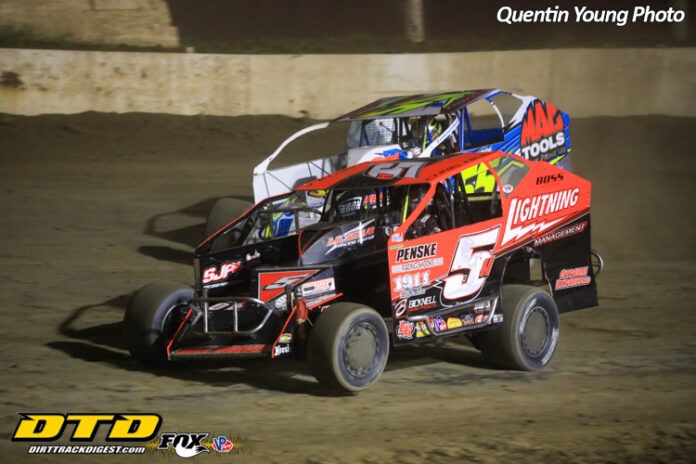 When he’s not buckled into his brightly colored Bicknell, LJL/Kevlar big-block you’ll probably find him with some air conditioning gauges or on the phone selling a new furnace to a customer. Hile owns a heating and cooling company called Hile Heating and Cooling. But on Monday at Lebanon Valley, Hile mastered the high banks like a seasoned veteran.

Before the start of the 100-lap grind, Hile was gracious enough to give an impromptu interview while making last minute adjustments to his car.

“I got about 12 laps here now,” joked Hile with an infectious smile. “I’m a veteran now.  My goal here tonight is to put this car back (pointing to his trailer) into that trailer in the same condition its in here now.”

Hile, who hails from Oswego, N.Y., is entering his rookie campaign on the Super DIRTcar Series tour this year. While COVID-19 delayed his debut on the tour full-time last year, he’s ready to tackle all the tracks that the Series brings.

While Hile started 17th, it was the finish that mattered most. A fourth place finish at the Valley of Speed is no small accomplishment, especially when the stars of the Super DIRTcar Series are on hand.

“When the green flag flew I decided to see what we could do and I was able to just start passing cars,” said Hile. “As the race wore on I was able to keep pace with the leaders. The track was wild in turn one and two with the ruts while the west end was slightly better. I seen there was a lot of attrition with suspension issues, but I run a custom type of suspension mount on this car.  You can run just about anywhere and it won’t fail.”

Inside his trailer on a work bench after the race sat the left side exhaust pipe. It was crushed on the end.

“Around lap 43 or so it got loud so I ran the last half of the race without a left side exhaust.”

Also while speaking to me, a member of Hile’s crew yelled in from outside “1 inch.”

That was how much fuel they had left in the tank after the 100.

“I also couldn’t see towards the end. I kept reaching up and taking tear offs off and that didn’t help,” Hile added.  “I think it was the moisture or the fog that was steaming up my visor on the inside.  I’m just thrilled to have finished the race, my car is in one piece and we got a top five, which is just fantastic. It will make the ride home tonight a lot easier to do. We may not be of much use tomorrow, considering the late hour, but a good finish like this goes a long way.”

Hile compares Lebanon Valley to his home track of Brewerton. Not for size, but for speed.

“At Brewerton things happen so quick there, kind of like racing in a soup bowl” he stated.  “Here the place is big, but the speeds are high and if you get in a jam here your going to know it. Your going to surely have a wrecked car.”

Hile is looking forward to returning to the next Series race at Malta on June 22nd.

“The last time I was there I had some mechanical issue.  We have since fixed that issue and I’m looking forward to going back there with better outcome.”

Hile’s previous finishes this year on the Series have been 12th at Weedsport, 16th Bridgeport, 15th and 20th at Bristol, 13th at Can Am.