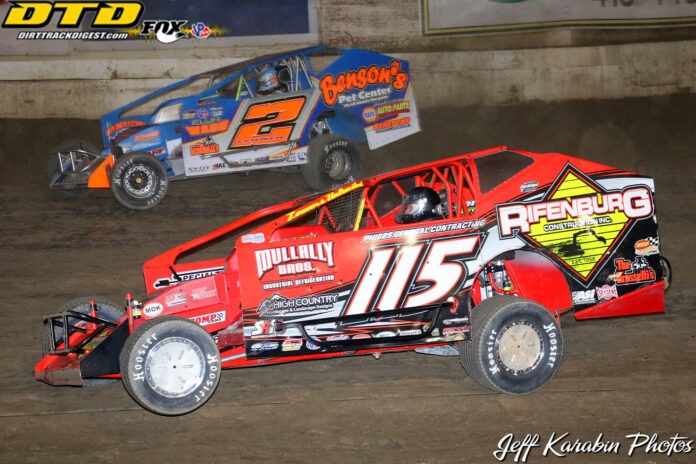 When the 2021 season got underway, the iconic No. 115 and one of the most respected drivers in Modified racing once again strapped into his red race car and has had a somewhat tough go of it in the early stages of the season.

Currently, Kenny Tremont is in eighth at Lebanon Valley and 11th at Albany Saratoga in the point standings.  Tremont is mired in a funk. Racers get into funks at some point and everyone of them searches for the answer to get out of the cellar in points and back into the win column.

“I’m not sure what the issue is,” said Tremont before the spring edition of Mr. DIRT USA at Lebanon Valley. “It’s not just one thing, it’s a combination of things. We didn’t get a late start to the season, we had everything ordered in the fall.  We were ready for practice here when they opened the gates for the season.

“I think there maybe some trepidation on my part. These cars (a short rod Bicknell) are extremely sensitive more so now and than at any other point in time.”

Besides dealing with the coils, Tremont is also against some very stiff competition each week.

“You have to race hard against the likes of (points to his fellow competitor pitted next to him) Andy (Bachetti) and Eddie (Marshall) and all the top runners. You have what they have and they have what you have, but sometimes you have to look at the big picture and maybe you take your foot out of it instead of blasting it right in there. You look at what happened to me last year at Malta and if you hit a rut these cars dig right in and up and over you go. No one wants to have to buy a new car or end up injured. You just have to keep digging and plugging away it.”

Tremont, who is an automotive instructor at Hudson Valley Community College during the week made it absolutely clear this year isn’t a farewell tour.

“I race year to year and I am committed to racing each week here and at Albany Saratoga.”

While it’s not a secret that Tremont parted ways with his long time sponsor of 25 years, S&S Asphalt during the off season, Tremont at age 60 is holding his own and is confident that he’s close to turning around the season.

“If Phil Mickelson can win one for the old guys, I think I can put some more wins on the board this year.”

While Tremont didn’t qualify during his heat race for Mr. DIRT, he did put one a whale of performance in his consi, pressuring Kyle Armstrong for the lead in their consi. Tremont finished runner-up and start the 100-lap affair in 24th. Tremont was stout in the feature. He was running inside the top 10 with 12 to go. With less than five to go, Tremont suffered a flat left rear. As if that wasn’t enough to make even the most loyal of Tremont supporters cry, the engine would overheat as the race completed.

When Tremont pulled into his pit box behind pit lane, the team took the hood off and a massive plume of steam was seen coming from under the hood of the 115. Tremont earned a disappointing 16th place finish.

Come Saturday night you know that Kenny and his team will be at Lebanon Valley just as sure as the sun will rise in the morning.

Special shout out to Abe Tremont who celebrated a birthday on Monday. Happy Birthday Abe.