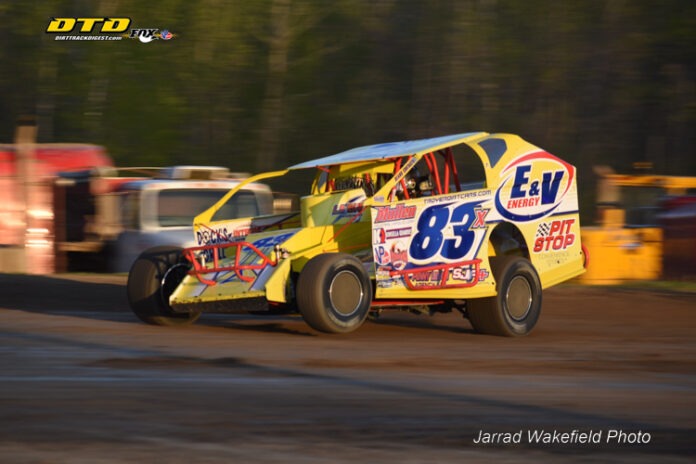 There was a time that nearly all the elite drivers on the Super DIRTcar Series drove a Troyer. Bob McCreadie, Kenny Tremont, Doug Hoffman, and the always exciting Danny Johnson. However, that was then and this is now.

Troyer hasn’t been a leading chassis builder in Modified racing in sometime. Everyone and their brother have switched over to Bicknell Racing Products from St. Catherines, Ontario Canada. Randy Willamson and his staff have virtually taken over the Modified and Sportsman ranks over the last few years. Selling 300 plus chassis in just model year 2021 alone.

Looking a little deeper outside of who has won on the Super DIRTcar Series or the Short Track Super Series, you’ll see names like Scott Ferrier, who had a fifth place finish at the Accord Speedway in the Battle of the Bullring in early May, Vince Quenneville Jr. who just won the Northeast Crate Nationals on Monday at Devils Bowl Speedway in Vermont, Tim Sears Jr., who just switched over to the Troyer chassis this year and authored a fantastic run in the Lebanon Valley Mr. DIRT event on Monday- he took an unpaid provisional started 25th and was up to the top 10 late when he ran out of gas, and Tim Hartmann Jr, the defending 2020 Albany Saratoga Speedway track champion who is also within five wins of the all time win mark there as well. These are just a few of the men who are piloting Troyer’s to wins and top 5’s in the 2021 season.

Mark Lipari and Tony Chiruck have assembled a team of professionals that have all bought into what Troyer Dirt Cars wants to be now and well into the future.

“We have people that have been here for decades and we have a big youth movement. Guys in their 20’s and early 30’s,” said Mark Lipari by phone on Friday. “We have inventory, we have parts, accessories and we have cars ready for immediate delivery. The only caveat is that sometimes the car may not be the color you want, but other than that if you need a car you could get one today.

“The new TD5 is our innovative car for the future. It’s got a lot of built in adjustments to it that a team can make at home. It has a lot of bolt on features. No more shock sliders, which has given teams headaches for years. The car is very modular. You won’t have to buy a new frame next year if another suspension design comes out or another part is made for the car. It’s also helpful for guys that run American Racers or Hoosiers. Also its very adaptable to nearly all the suspension configurations teams are running.”

But why should a team switch from another manufacturer to Troyer is the main question that I wanted to know.

“We are rebuilding the brand from the ground up” said Matt Steffenhagen, who is Troyer Dirt Cars Operations Manager.

“We have worked tirelessly in the last 11 months with our vendors to reestablish relationships with them and to prove to them we are here to stay. We are on firm financial footing and we have a product that people want to buy.” said Lipari.

Innovation is something that successful businesses have to do to keep the phone ringing and to keep products fresh and create a market for the products they design and manufacture. One of the areas that people look for in the 21st century is a website. Troyerdirtcars.com has an innovative feature for body panels. With an exploded view of a TD5 a customer can pick out the exact piece they need. Additional upgrades to the website are coming.

“We will be adding a YouTube section on how to install the parts and accessories correctly and give you real world tech advice with the actual car so you can actually see for yourself how it looks,” added Lipari. “We will be adding additional exploded views on the website of chassis components and accessories along with the already exploded views of the panels.

The owner of Camping World, Marcus Lemonis has a saying that all businesses should heed to be successful. People, Product, Profit. Troyer is delivering on that very phrase daily.

“We have inventory. Sheet metal, steel, aluminum, hard parts. We had been preparing for the future over the last year and have been upping our inventory. We are positioned well. We are already looking at building cars for Super DIRT Week and for the all important trade shows like PRI and also right down the road from us in Syracuse in November. In fact, we have or will have taken possession of new jigs for the 2022 models in the next few weeks. We are utilizing CNC plasma cutters and CNC tubing benders which really helps drive down the time to assemble and build a car which lowers our labor and production costs and gives us repeatability on our panels and tubing. We have the right people in the right places,” said Tony Chiruck.

Some of those people are Kyle Inman who is the operations manager of TFR Manufacturing. He’s been responsible for the tweaking the production of the dirt cars. Finding the inefficiencies and streamlining the building process.

Rob Fuller, who over the last ix months has invested heavily in revamping the TFR Manufacturing building on Lyell Road. At the same time, Mark at Troyer Dirt Cars has invested into providing for the raw materials to be on the shelf to build the new cars, purchasing the parts and accessories that go into each car to be readily available on the shelf, and he’s provided the working capital needed to fund the “new” Troyer Dirt Cars.
Also helping out with the machining of the billet and aluminum components is Tony Chiruck at Troyer Machine. He’s been involved with Troyer for 34 years.

“Without him being here and having the contacts in the industry that he has I don’t know what we would do without him. He’s amazing at what he does and I am so thankful he’s a part of the Troyer team” said Mark Lipari.

A new TD5 comes standard as a coil-over only, left side panhard mount only, rubber floor chassis. There are multiple options and packages that can be purchased at an additional cost.

Tim Sears Jr. switched to Troyer this year not because of any issues or performance related issues with his Bicknell.

“I’ve been driving Bicknell’s for over 15 years. I just felt that we needed to do something different than everyone else. We went to Troyer over the winter and they got us into a package deal and we are able to bolt our BRP parts onto the Troyer with the exception of a few items exclusive to Troyer,” said Sears. “ I just need to draw better and not be in a consi at places like the Valley.  I’m going to run this car on the Super DIRTcar Series and at Brewerton.”

On Monday Sears was in a consi and took an unpaid provisional to make the field for Mr. DIRT Track USA event at Lebanon Valley. Sears started 25th and steadily worked his way to the front.

“We made a few minor changes to the car after the consi and it was really fast in the feature. I could run the top, middle bottom it didn’t matter. I was able to pass cars. I thought we had something for the leaders late but we ran dry. I don’t know why, we didn’t use that much fuel at Weedsport but we are on the gas a lot longer at Lebanon versus Weedsport.  I also got sand blasted pretty good too. I don’t run a dirt skirt under my helmet. I didn’t have any fogging issues like some guys did but I got blasted pretty good,” Sears said.

Sears went on to take his first win of the 2021 season in the Troyer car on Friday night at the Brewerton Speedway.