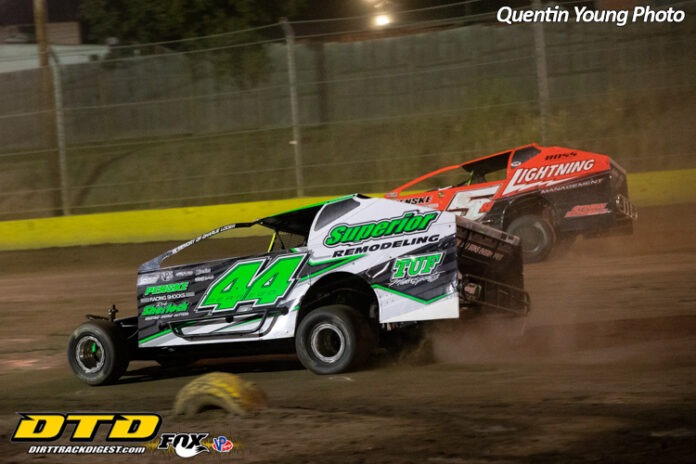 Chris Hile is cutting his teeth on the Super DIRTcar Series tour this year. He’s been knocking on the door for his first win of his career with the series.  On Thursday night he showed Billy Decker and several other drivers he’s here to be taken seriously.

Running in the top four all night long, the Oswego, N.Y., driver picked up the guaranteed spot for Oswego by finishing second to race winner Stewart Friesen who had already picked up a guaranteed spot earlier this year.   It wasn’t a cake walk for second by any stretch of the imagination.

“We filled the tank right to the top,” stated Hile.  “And on the final restart the fuel pressure gauge was bouncing around and when we went to the scale the car ran out of gas. We made weight and passed tech, but we got every drop out of the tank”

Hile by trade is in the heating and cooling business in Oswego. After his heat race, Hile and his crew went to work on locating a small fuel leak.

“Looking for a small leak is like trying to find a needle in a haystack,” said Hile.

Making his maiden debut in a big-block, a regular smal-block campaigner at Orange County was Chris Stevens. Stevens had mechanical issues earlier in the night and didn’t make the feature.

Not one, not two, but three cars were at the disposal for Mat Williamson. Williamson was aboard the Buzz Chew sponsored No. 88 Bicknell. They came with a spare in the nose of the trailer and his other car owner, Jeff Behrent, who supplies a stout piece for the Canadian speedster in STSS events brought his big-block in the event that Williamson needed a back-up.

One for the old guys – Jimmy Horton was running very well in the 102-lap feature. He was a solid top five until lap 66 when he got a flat and also had an issue with a left rear shock. He went pit-side and didn’t return.

Running a Troyer on the Super DIRTcar Series may seem like a bad idea considering how many teams utilize Bicknell and Teo. Don’t tell that to Tim Sears Jr. Earlier in the night Sears lamented the fact that.

“Last week that car was wrecked,” mentioned Sears.  “A lot of bent pieces and a lot of time was spent at Troyer getting the car right. But something isn’t right with it. It’s something were missing and I don’t know what.”

Sears authored a fantastic run in the feature and picked up the Hard Charger Award for passing the most cars. Sears has been running this Troyer weekly at Brewerton and also on the Super DIRTcar Series. Sears finished sixth after starting 24th on the grid.

Maintaining your equipment to keep it fresh – Billy Mathis otherwise known as Billy The Kid is powering Stewart Friesen to a lot of wins not just on the Super DIRTcar Series but also on the STSS.

“Right now I’m not taking on any new clients. This is a service business. There’s just five of us total that are working on these engines and getting back to the customers. You can’t take too many engines in and then get backed up and next thing you know you’ve alienated a lot of people.”

Mathis indicated there has been shortages of parts from nearly all the suppliers he deals with.

“I have a spare big-block and a spare small-block we would loan out to one of our customers if they needed it in the event their primary motor is in and is waiting for parts”.

Chris Larsen, the mild mannered car owner for Friesen was all smiles as his driver once again cashed in for a big win.

“He’s a once in a generation driver,” said Larsen. “He’s got a top notch crew and they are firing on all cylinders. I couldn’t be more proud of him and his efforts.”

Scorching heat drenched the Middletown area before race time along with high humidity. It turned the track preparation into a nightmare. The track was dusty from the get go. Matt Sheppard was asked how was the vision on the track during the feature his reply was blunt. “It’s not great, but not the worst I’ve seen here.”

Brett Hearn, while not racing is the GM at the “House of Power” and he lamented how hard the prep crew worked but was stymied by the high heat and humidity.

“I wish people could have seen how hard we tried. The cars are very powerful and the blistering heat makes it extremely hard to get the surface right”.

Keith Flach was back in action on the Super DIRTcar Series. His early season plans were to follow the SDS as the Canadian dates were scratched. However, Flach has had work and family commitments and he’s used up one car earlier this year with a flip at Albany Saratoga. Flach debuted a new car and finished the 102-lap event with an 11th place finish after winning the last chance qualifier event.

Did you know that when not running a big-block modified that Flach is an accomplished drummer?

Flach indicated he will not be entering the Fonda 200. “I went to Fonda earlier in the year with a big-block and if you could start up front you might be able to hold those small-blocks off but if you have to come from the rear it’s not happening.”

Flach is a capital district native as he hails from Ravena, NY.

In the searing heat that was felt during the day and into the night at Middletown, one would think that drivers could use NASCAR style cool suits to help with the heat and humidity. That’s not the case. In speaking with the owner of Behrents Performance Warehouse, Jeff Behrent ,which supplies all things for racing.

“Modified racers don’t have the space inside the cockpit like Cup cars do for the cool suit tubing and the other things associated with those style of suits. Our guys don’t race four or five hours long like Indy car or NASCAR. The drivers utilize a helmet blower and they try to hydrate as best as they can, but the Modifieds are open cockpit per se. There are no windows on the left or right side and the windshield is wide open. They just have to grit and bare it in short.”

According to both Hearn and Larsen, the 2021 Eastern States Weekend will be four-day event. While there are some things that are on the table like the possibility of a different touring series coming in, nothing is set in stone and when things are fully assembled for a schedule a full press release will be issued.

Next Thursday night the Morton Buildings World of Outlaws Late Model Tour will be on hand at Orange County. Tickets are $35 for General Admission and $45 for reserved.

The next Super DIRTcar Series event is next Tuesday August 17th at Brewerton Speedway. The event will pay $10,000 to win and will be 100-laps in length and will be a NAPA Super DIRT Week qualifier.

August 28th at Orange County the Final Four will be decided. Only those four big-block drivers will be eligible for the September 2nd 50-lap feature event where one driver will win the feature and could win the $25,000 point title. Points for 358’s end on August 28th.