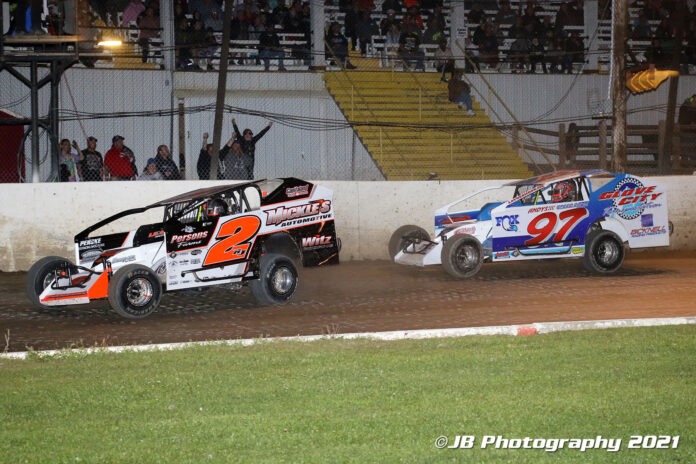 FONDA, NY- He was fresh off a major win on the Super DIRTcar Series tour on Thursday night in Middletown, NY where he’d picked up a 102-lap $10,000 to win feature event, Stewart Friesen went to the payout window again for the 10th time at Fonda and was oh so close to putting the final exclamation point on the regular season, coming up 5 points short of the title.

Coming into the final night of points, Friesen and 3 other drivers (Josh Hohenforst, Rocky Warner and Ronnie Johnson) were within 13 points of each other. It was anyone’s race to win and championship to win as well.

Ancel Collins and JaMike Sowle lead the field to the green flag with Sowle taking an early command of the race. Sowle’s time as the race leader was short lived as a caution on lap 3 slowed the field erasing the early race lead he had built up. On the ensuing restart, Friesen blasted right to the front and took control of the lead on lap five and never looked back.

The action was hot and heavy behind Friesen though for the point title. Ronnie Johnson was up to fifth on lap six with Rocky Warner just a spot or two behind. Friesen would hit lap traffic on lap nine while RJ and Rocky were marching to the front.

The caution waved again on lap 15 for Bobby Varin. Varin would later rejoin the field after going pitside. Once again on the restart Friesen would pull away from the field. Just 5-laps later on lap 20, Friesen would hit lapped traffic again.

With 23-laps in of the 30-lap feature RJ overtook Craig Hanson for second. In the end though, Friesen would go on to score his 10th win of the season at Fonda with Rocky Warner finishing third, Craig Hanson and Jessica Friesen rounding out the top five.

After finishing in the runner-up spot and tying for the championship, Ronnie Johnson took a few moments to get out of his car once he returned to his pit stall. Upon getting out of the car, Rocky Warner was the first one to come over and tap Ronnie on the shoulder and gave RJ a fist bump. In a sign of mutual respect the two competitors who waged a season long battle and park right next to each other, showed true sportsmanship towards each other.
Ronnie has had the most difficult year of his life. In April he lost his best friend and father due to ALS. A 10-year battle that ended on April 1st. Ronnie made the choice to return to Fonda for the season in the spring and focused on trying to put his program back on track after the passing of his dad. For most of the season RJ utilized the wrong type of engine while his small block was in for repairs at Kevlar. Only until just a few weeks ago when he debuted a new car and had his small block back did the season’s first win come to fruition.

“I’m ok,” said RJ when asked if he had any emotions about being co-champion and the culmination of a season of work and long nights. Racing for RJ this season has been about having fun and having the right crew help on a weekly basis. RJ is first to deflect congratulations and accolades. Instead he heaps praise on his crew, some of them are from the golden years of his fathers race team. RJ is scheduled to compete the rest of the season on Friday’s at Malta where he is currently seventh in points, 109 out of the lead. RJ is scheduled to race the Fonda 200 in mid September and then will take the rest of the season on a race by race basis. For sure he wont be at Oswego for Super DIRT Week nor is he going to race at Devils Bowl on Sunday August 15th.

Rocky Warner has had an adventurous season at Fonda. He started the season off using a new Teo car and then shelved that car after inconsistent finishes. He then pressed into service a new Bicknell and cashed in with a big $10,000 win in the spring. 3 weeks ago he destroyed that car in an accident at Fonda. With news that his car owner Jake Spraker is retiring at the season’s end, Warner tried to go out on top. He ended up as co-champion in the modified division with RJ.

“When I wrecked that car here a few weeks ago, I told Jake we need new tin to make it to the end of the season. He’s retiring and I had him make the choice to get a new car. I’m hopeful that Jake changes his mind as he’s such an important person in racing. I’ve been driving for him for seven years now and this is my second title with him,” said Warner.

Jake Spraker was happy to finish as co-champion in the Modified division. “Well the car is in one piece. You could have a car that came in on a wrecker destroyed. If your going to come up short or tie with someone, Ronnie is someone that you don’t mind. He’s got great equipment and he’s a real nice guy. We may have had our time together as driver and owner and we won titles together, but when we parted we didn’t part ways on negative terms. He’s a great competitor and he races you clean what more can you ask for.”

Spraker announced that he was retiring from the sport after nearly four decades as a car owner. A more complete story is in the works on this subject.

Ten wins.  That’s what Stewart Friesen put on the tote-board at Fonda. And, he didn’t race a full season at Fonda due to NASCAR commitments. He nearly tied the record for the most wins in a season at Fonda held by Jack Johnson.

“All we do is race. Its a lot of work but I love Fonda and the fans here,” said Friesen. “It use to be you could run the same car everywhere nowadays its a grind. You got a car for the Super DIRTcar Series, you got a car for here, a car for the STSS, different tires, wheels, fuel etc. Tommy and my crew work really hard and make it look easy but there’s a lot of hard work done behind the scenes to make these wins happen. I can’t thank Halmar and Chris Larsen enough for all they do to help me get these wins.”

Friesen will miss the upcoming Super DIRTcar Series race on Tuesday at Brewerton. He has a NASCAR Media Day event to attend for the upcoming NASCAR Camping World Truck Series playoffs. Contrary to any internet discussions going on, Friesen hasn’t been chosen to drive for Hattori racing in the Cup Series in a Toyota.

For a 14-year old teenage boy, Derrick McGrew Jr., is as poised as some of the veteran Modified drivers three or four times his age. While he had a night in which he didn’t set the world on fire, he’s all chips in on racing a big-block modified as much as possible.

“We are waiting on my motors to come back. We plan on going to Louisiana again in November for the Cajun race. We went last year and it was a lot of fun. We keep digging and trying to make the best of what we got. I got a car that’s not very consistent. It’s been on its lid once and I think the floor is starting to go or something is bent because one week it goes really well and then the next its off the pace,” said McGrew.

McGrew Jr., is now home schooled so he can focus more on racing and shop preparation.

After contracting COVID-19 and nearly dying from it, Dennis Palmatier was on hand at Fonda.

When asked if he’s feeling back to normal he said, “Yes. It’s just that when its really hot and muggy out I have a hard time breathing. My doctor says I shouldn’t be at race tracks or in the dust but I’m a lot better than where I was a few months ago.”

Palmatier runs his own shock service company called Race Prep Shock Service. He’s also experiencing a shortage of parts like many in the racing industry.

“I have enough to get me to the end of the year, I was going to order a batch of new shocks but I was told it would be 10-12 weeks and by then race season would be over with.”

Fonda Speedway will be off for the annual Fonda Fair. It comes back for the season finale, The Fonda 200 on September 16,17,18th with a rain date of September 19th. Advanced sale tickets are on sale now. Call the Speedway during business hours for more information or to purchase tickets.

Spotted at Fonda on Saturday night was former Fonda Speedway promoter Ric Lucia and General Manager Marty Beberwyck. Lucia is still running his Lucia Specialized Hauling business and occasionally fields calls from promoters seeking advice on track prep or the day to day operations of a short track. Lucia promoted Fonda for 17 years before handing the reigns over to Matt DeLorenzo.

“I’m in my mid 70’s now, so I don’t think I’ll be in the promoting game again, but if someone called and wanted to have a discussion on operational matters I’d be willing to help, but not on a day-to-day basis.”