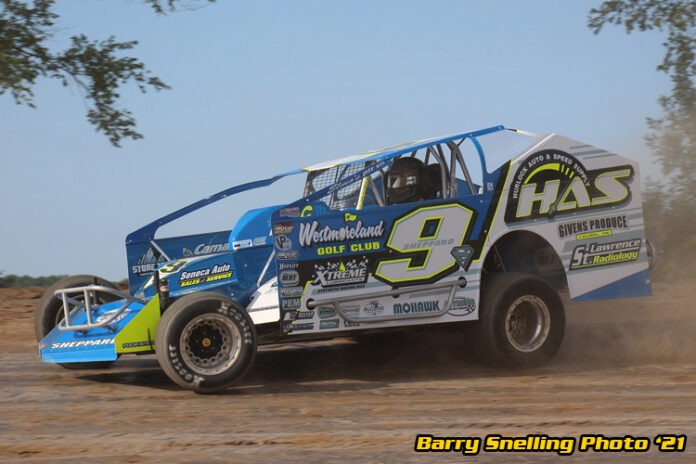 Matt Sheppard drew the pole, led all 50 and took home a mountain of cash, $10,100 to be exact after dominating a caution free Battle of The Bowl III event at Devils Bowl Speedway.

But the draw was just the appetizer, the feature brought the main-dish. Stewart Friesen, the Sprakers, N.Y., Modified super star started on the outside pole and gave a chase for the ages through extremely intense lapped traffic to no avail.

Sheppard debuted a new car for the event. However, the car was a handful earlier in the evening through time trials and his heat race, but Sheppard is a professional driver and didn’t drive over five-hours one way just to debut a new car and end up with a subpar finish.

“My crew made a bunch of changes and once the sun went down the track had changed,” said Sheppard.

With Sheppard and Friesen setting a torrid pace, Sheppard hit traffic just seven laps into the event. Things would only get more intense in the cat and mouse chase for the lead. An extreme amount of traffic confronted Sheppard for the next few laps with only a temporary reprieve coming on lap 14. Friesen was right on Sheppard’s rear bumper, he wasn’t going away quietly.

Meanwhile, the racing was just as intense behind the leaders. Mike Mahaney and Adam Pierson were waging a battle for fourth with just 18-laps in. As the field hit the halfway point, the top two of Friesen and Sheppard had separated themselves from the rest of the field. With 25 in and 25 to go, It was Sheppard, Friesen, Drellos, Mahaney and Pierson.

With 30-laps in of the 50-lap event, there was a big gap back to third place Drellos with Mahaney and Pierson still in chase. Anthony Perrego, who started dead last due to terminal engine failure in his heat winning event and being forced to switch to his big-block, was the last car on the lead lap in 10th.

In the end though, Sheppard was overpowering and took home the big pay day with a three-plus second lead at the end over Friesen. Sub 16 minutes to run the entire 50-lap feature. Because all the drivers ran caution free, everyone received an extra $100 from promoter Mike Bruno. Rounding out the top five were Drellos, Mahaney and Pierson. Seven cars finished on the lead lap.

“You never know what to expect,” said Sheppard. “The track was tough and I was just trying to keep my rhythm going. You were hoping that there wasn’t going to be any cautions after going. I had a little frustration with the lap traffic. My hats off to my crew. This is a new car and they put in a lot of work to get it dialed in”

Friesen was complimentary of his finish and all things with the event. “My hats off to Matt, he ran a great race. I’d also like to thank Mike for this event and to all the fans that came to support the event. The track was good, the extra prep before the feature was appreciated”

And finishing third was Drellos. Drellos has been a hot topic in conversations around the Devils Bowl track due to his involvement in a crazy set of racing and post race events that earned him a one-week suspension. However, since that’s all in the past now, Drellos was short and succinct in his post race comments. “Mike (Mahaney) is a bottom feeder. I knew he was there. I’ve done this race three times now.”

Drellos would go on to win the sportsman event later in the night and took home a $2,000 payday.

Tim Fuller was making a rare appearance at the Devils Bowl Speedway on Sunday. He was aboard his current ride, the No. 19 St. Lawrence Radiology Bicknell.

“I’ve known Mike (Bruno) for more than 25-years. I was coming here to support him and his event.”

Fuller utilized a 358 engine for the event. Fuller is committed to attending Eastern States at Orange County in October.

36 big and small-block Modified’s attempted to qualify for the 24-car starting field. Two, 25-lap heat races paid $1,500 to win which set the field for the main event. Four spots went up for grabs in the consi.

Kenny Tremont will return to his teaching position on August 30th at Hudson Valley Community College. He teaches automotive instruction. Tremont added to his vast win total at Lebanon Valley on Saturday night with another feature win.

After racing at Fonda on Saturday, Orange County on Thursday and Woodhull earlier in the week, Friesen was a late arrival to the Bowl. He didn’t bring his stacker hauler. Instead they brought his Modified in a basic car trailer with some tools and tires. Also, the car Friesen used was a Jessica Friesen car with just his panels on it.

If you liked what you saw at The Battle of the Bowl III, mark your calendars for September 26th when they Modifieds return for a 100-lap $10,000 to win event. Look for many of the same drivers to return