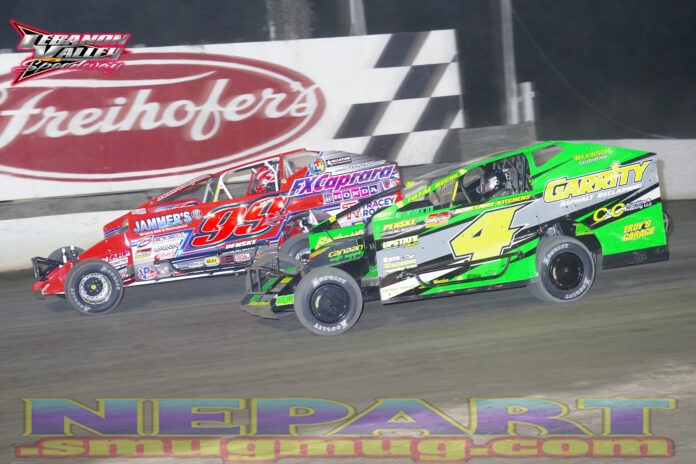 Andy Bachetti, the 2021 high point winner on the high banks in both small block and big block modified competition picked up the annual Mr. DIRT Track USA race and scored a huge $25,500 win. The race wasn’t without drama or anger and rage towards fellow racers and the sanctioning body.

A strong 30-car field took the green for the second Mr. DIRT race of the 2021 season at the Valley. King Ferry, NY native Mike Mahaney set the early pace from the pole. However his night would come to an abrupt end after just one lap when he pounded the turn three wall when the brakes in the George Huttig owned No. 35 went out.

When the field went back to work on lap seven, it was Larry Wight setting the pace with Andy Bachetti right in tow with him. Wight and Bachetti quickly checked out on the field and formed a two car battle for the lead that would last some 13 laps when Bachetti took the lead down the backstretch on lap 20.

As the race was nearing the halfway point, Matt Sheppard was on the way from 9th starting spot. He was up to third on lap 43 and began to apply pressure for second spot from Larry Wight.

Caution slowed the race down on lap 45. Making big moves to the front were Kolby Schroeder who started 22nd was up to 11th and Kenny Tremont who started 24th was up to 13th.

When the race restarted on lap 49, Sheppard applied maximum pressure to Larry Wight for second but was unable to take over the second spot. Caution flew again on lap 59, this time for Kenny Tremont who slowed with suspension issues on the left rear while sparks showered the rear of the car.

Marching to the front was former Valley regular Billy Decker. Decker had marched up to 6th from his 17th place starting spot, slapped the right side of his #91 with the turn two wall on lap 64 and still kept marching onward.

Caution flew again on lap 73 for Adam Pierson, the outside pole sitter. If the action wasn’t intense at nearly all points in the field, things were about to get super intense.

Another caution flew on lap 75 for Kenny Tremont who had a left rear flat.

On lap 81 the caution flew again. This time it was for a wild set of circumstances. First, Bachetti was penalized for jumping the start, at the same time Wight didn’t fire on the restart jumbling up the field, and also at the same time a little bumper tag was happening in the field. This set the stage for Tyler Dippel who got jostled around during the restart and while under yellow ran down Matt Sheppard who was running in the top 5, and rammed into the left rear corner of Sheppard’s 9s. Dippel would retire from the race with suspension damage on the front of his Teo, while Sheppard dodged a bullet with no damage that was visible during the race.

Bachetti was given no warning for jumping the restart and was placed back one row. This handed the lead back to Wight who had his hands full with Stewart Friesen who had finally worked his way to the front.

Friesen quickly took over the lead and was beginning to open up daylight over 2nd place Larry Wight. On lap 83 Bachetti overtook Wight for 2nd and was in all pursuit mode for the lead.

The caution flew again on lap 91 for Demetrios Drellos. On the ensuing restart, Bachetti hip checked Friesen going into turn two on the bottom and took over the lead.

With a final yellow on lap-100, Sheppard was able to overtake Friesen for second with Friesen finishing third, and coming off his first career win a week earlier, Bobby Hackel IV finished 4th with Billy Decker rounding out the top five.

“Every time I race for that organization (DIRT) they try to screw me. This is why I don’t race for them”.

Bachetti also added, “If I hadn’t won this race tonight it would’ve cost me a lot of money.”

Bachetti hit victory lane and jumped on top of his car and flexed his muscles and yelled with a roar that could be heard down the frontstretch. He was surrounded by a massive mob of fans, sponsors, and family. It was the exclamation point on his season where he took home both titles.

Sheppard was less than thrilled with what transpired in the race. “He’s a punk, someone should give him a black eye,” when speaking about his run in with Tyler Dippel. “Our car was fast tonight and we gave it everything we had.”

Sheppard summed up his night while shrugging his shoulders. Clearly angry at what transpired during the race.

Friesen succinctly summed up his night “We had the wrong tires.”

Friesen was suppose to fly down to Darlington, S.C. for his NASCAR Truck race and then fly back to Utica for the New Yorker 100.

Fifth place finisher Billy Decker came to the Valley with a new body on his Gypsum Wholesalers 91. “We bent the front axle back when he slapped the wall and now the body is broken in,” said his crew chief Scott Jefferies.

Dippel described his run in with Sheppard during the race “as a racing deal” and when he was told that he should “get a black eye” by Sheppard, Dippel shrugged it off. Dippel is no longer racing for Bill Pascual.

“I have my own stuff that I’ll be racing with,” said Dippel while deferring comment on why he split with Pascual.

Eddie Marshall is tossing the idea around of going to Eastern States but is hesitant to go due to track conditions. If he decides not go this will be his last race of the 2021 season.

Bobby Hackel IV will be racing the STSS tour in 2022 full time. His team will be building a small-block for that tour over the winter.

Keith Flach didn’t have his stacker with him. Instead he utilized a traditional race trailer. When asked where his toter was he said, “its not exactly running right so we decided to leave it home. We had trouble earlier this year when we went to Bridgeport”.

Flach will be headed to Oswego for Super DIRT Week.

Kenny Tremont had to utilize a back-up car when his primary car had engine trouble.

“The motor is skipping and I just don’t have time to diagnose it. We put new plugs in it and that didn’t solve the problem.”

Sheppard missed hot laps when a power steering pump failed. According to his dad Stu, “after Middletown I put a new box in it and that didn’t solve the problem.”

Ronnie Johnson made his third appearance at the Valley for the season. His night ended with 37 laps in the books with a broken brake line. Look for RJ to be at at Albany Saratoga next Friday night for a $,3500 to win show. He’s also going to be at the Fonda 200, but no Eastern States, but he will be at Port Royal for the 200.

When the series comes to a track the stars and veterans of the series make it look easy to unload and go fast. Imagine coming to the Valley for only the second time and relying on notes from your first visit just a few months earlier.  That’s what Chris Hile faced.

“I got top of the line stuff, but when you roll into a new place like this you have no notes to work from. It’s a steep climb.”

Hile has had a fantastic year. He won three races at Brewerton and sits ninth in series points.

Jeff Behrent, the owner of Behrent’s Performance Warehouse, said many teams are in the dark about the upcoming Eastern States 200 weekend.

“We have customers that need to know if there is going to be live pit stops so they can acquire the stuff they need for the pit stops. Thousands of dollars worth of parts for the quick fill, dump cans, etc. and there’s been no press release or info given. It’s getting late and teams just can’t show up the night before Eastern States and pick up all the things needed for a live pit stop.”

Working pit road for the night was Hannah Newhouse. Hannah has provided race coverage for MRN Radio. The 24-year old reporter competed for 4 years in the ARCA Series. She will also be reporting for NBC Sports in a few weeks and provide coverage for the IMSA series.

The Super DIRTcar Series makes it’s next stop with a doubleheader at Weedsport next Saturday and Sunday for the Cavalcade of Speed. For more info go to superdirtcarseries.com