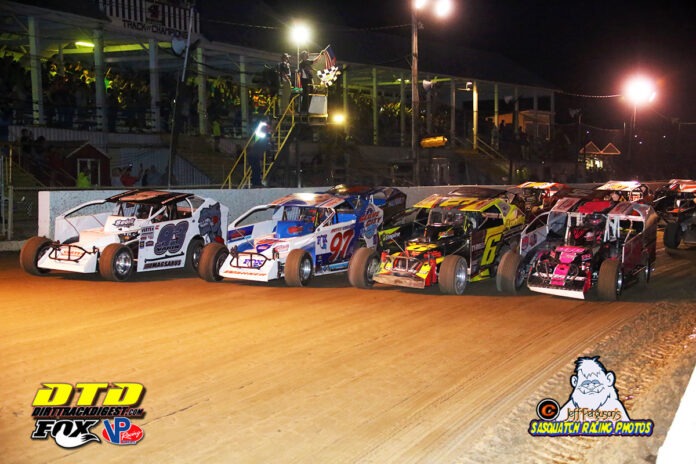 The Halmar No. 44 is an unstoppable force when it comes to wins at Fonda. Once again the Stewart Friesen driven Halmar International Bicknell was in victory lane and this time it was for the biggest prize in the Northeast, the Fonda 200 and it was worth a staggering $53,000. The win marked Friesen’s second consecutive win in the Fonda 200 and his stunning 11th win on the season and his 79th career win at Fonda. Utter domination of the likes we haven’t seen since the early 80’s when Jack Johnson was the man to beat on race days.

Mike Mahaney should have a new nickname, Riverboat Mike. Mahaney pushed all his proverbial chips into the middle and gave up his top 10 points standing in the Super DIRTcar Series tour to chase the $53,000 to win payday at Fonda.

“We made a business choice that we have to support races like this with a purse like this. I realize that DIRT won’t be real happy with me, but we will still race the Series when it goes to Malta next week and we will run Oswego and Charlotte. We need to repay our expenses by racing in events like this. It takes a lot of money to race and to cover the expenses of racing we need to race this event,” said Mahaney.

Also, Mahaney utilized a new Bicknell chassis on the night.

“We have been working over the last two weeks to get this car assembled. You don’t get an instruction sheet with the car, so sometimes you are waiting on parts to arrive to finish the build and we also raced last weekend at Weedsport so we got home late on Sunday after the race was rained out and we worked on the car all week to get it ready for here tonight.”

Mahaney was also asked about his two recent brake failures especially his epic crash at Lebanon Valley during the early portions of the Mr. DIRT event.

“We installed a part wrong on that car that got wrecked at the Valley and the other one we had a fitting that was loose and it allowed air to get into the brake system. So we tightened that one up bleed the brakes and we were good to go. The other car suffered some front end frame damage that we fixed ourselves. Like I said, the cars don’t come with an instruction sheet on how to put them together and sometimes the littlest thing can cause an issue that you just overlooked. It happens. When you look at the whole racing thing in general and you see how little mechanical failures there are, it’s pretty remarkable.”

Mahaney will layover in Charlotte and then head south to Louisiana to race in the STSS events at Ark-La-Tex and Chatham in mid November. He’s also preparing to get married in early January then take his honeymoon and then right back to the races at the end of January.

Rain struck the speedway around 5 p.m. for a brief period of time forcing the events to be delayed over an hour.

Thanks for the Memories

The 200 brought an end to a 39-year run as an owner of race cars for Jake Spraker. Spraker, the colorful and outspoken car owner for drivers like Mike Romano, Bobby Varin, and most recently Rocky Warner, has decided to call it a career. Spraker announced in mid- August that he was done racing however, social media was in complete denial.

Now with the 200 in the rearview mirror, Spraker has sold the car, the motor and the various parts and pieces that his race team used. On Sunday, Rocky Warner was to take the motor out of the second place finishing NO. 97 and start the process of cleaning up the shop.

“I cried during the week. I won’t lie,” said Warner. “I was up to Jakes a few times and I was crying. I’ve been the longest tenured driver with him for seven years and we are like family. He’s given me the best equipment and it’s sad to have it come to an end.”

Warner is waiting for the end of the season to seek out a ride for just Fonda. He will return to the JSR No. 98 for Utica in 2022.

Ronnie Johnson will be in action on Friday night at Malta with a DIRT legal 358. The plan is for RJ to race Friday with the small-block, Saturday with the Super DIRTcar Series big-block Modifieds  If all goes well, he will race at Devils Bowl on Sunday in the Devils Bowl Big-Block Small-Block Challenge paying $10,000 to win.

16-year old speed merchant Alex Yankowski had done some research and development racing earlier in the year at Fonda in preparation for the 200. His youth shouldn’t fool you though. A poised and well spoken teenager, the Jermyn, Pa., driver is racing against the best in Modified racing in New Jersey, Pennsylvania and now New York.

“I try not to focus on the fact that I’m just a teenager. I’m racing and learning and the other drivers treat me with the same respect I give them. I try to improve with each outing and even though we just won the Coalcracker, it’s not just me that got that win, its the whole team. Everyone just being so supportive and trying to get better with each race.”

ankowski’s night ended early in the 200 with mechanical failure. He will race at Bridgeport next weekend, then Port Royal for the 200.  They would like to attend Charlotte and then end the season in Louisiana.

Another teenager who is trying to get as much racing in as his budget will allow is Derrick McGrew Jr. At 14, Derrick races regularly with his big-block at Albany Saratoga, but recently his team has had a rash of engine trouble is currently without an engine.  The team hopes to rebound before the end of the year and hit the last STSS race in Louisiana.

The home schooled Ballston Spa, N.Y., native is seeking to enhance his racing program in 2022 by picking up some more sponsors to help with his engine program and to allow for more travel to other race tracks.

When things go wrong, sometimes they compound upon themselves. While under the halfway break, Alan Johnson’s team went longer on the pit stop than the officials allowed.  He was penalized and placed at the rear of the field on the start of the second 100-lap segment of the 200. While racing back to the front, Alan absolutely blasted the spinning Josh Hohenforst 6H car with the right side of his car causing severe frame damage. Johnson was unhurt in the accident.

While Stewart Friesen was giving his victory lane speech and the slew of photographs being taken, an emotional Jay Castimore, the noted tire specialist for Stewart Friesen was seen with tears in his eyes. When asked why he was so emotional, Castimore said, “I just won my 27th 200-lap feature event. I had 25 with Brett (Hearn) and now my second with Stew. I’m getting up there in age and I’m just so thankful to be able to be here and witness this and be a part of it. I’m also so grateful for the knowledge I got from Jack Johnson and Jim Beachy on how to prep tires. I still do it the same way they taught me. It’s just a moving moment for me”.