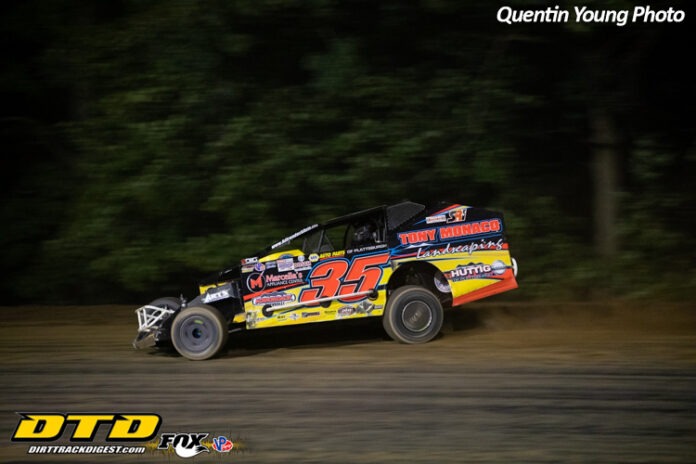 Mike Mahaney is in his second year aboard the George Huttig owned #35. The Kings Ferry, N.Y., driver has had a great year. He’s currently fourth in STSS north points, and his tied for the lead with Anthony Perrego in the South series points. He was in the top five in Super DIRTcar Series points before he entered the Fonda 200 but was penalized for racing in that event and dropped him to nearly 20th in points afterwards. However, he finished third in the 200 and now he’s just won the biggest race of his bright career.

“The biggest win as far as money ($13,000) and it’s just such a good feeling. Almost indescribable as far as what I’m feeling,” said Mahaney while he was in post race tech after winning his first career Super DIRTcar Series race at Malta. “I’m so used to being on the left or the right of the podium, but to do it here in front of my family, friends, my home track, my car owner and with this field its just almost too good to be true.

“This team fits me like a glove. There is no pressure to win every race. My whole team is rowing together. We are all pulling together to win races and run up front wherever we go. George (Huttig) has given me the best equipment and has invested his own money to rebuild this whole team. These sponsors on the side of the car and everyone that makes this deal happen I am so incredibly thankful for.”

The win came after Mahaney was able to beat on of the best in the business as he outlasted the leading Super DIRTcar Series winner in Stewart Friesen.

“On the last lap I had a hard time getting into four and I thought he (Friesen) had me but I was able to get the car turned and held on for the win.”

When asked what Friesen had to say after his close win, Mahaney said, “He just said good job. He’s the best in the business, but for today I’m finally a Super DIRTcar Series winner”.

Mahaney was extremely emotional in victory lane. Nearly in tears at times. Thanking every sponsor one by one, the moment he’s been waiting and chasing for had finally arrived.  It was a huge stage in front of a near capacity crowd. Mahaney jumped up and down on top of his roof on his Bicknell racecar in victory lane as confetti rained down on top of him.

For George Huttig, the win is just part of the whole game of racing.

“High’s and low’s,” said Huttig.  “I’m proud of those guys tonight. They ran a great race and this is why we do this. To get wins like this on a stage like this”.

Huttig, who owns several car dealerships in the Adirondack mountains and several NAPA Auto Parts stores has been involved in racing as a racer or as an owner since 1974.

“Mike is under no pressure here. I realize that you cannot win every race you enter. Sometimes your going to finish last or have an accident.  If everyone is having fun and everyone is working together to get the wins or top five’s or 10’s than that’s all that matters.”

Huttig also added, “When I knew Mike was available and he was looking for a ride, I offered to have him use my equipment. I own the trailer and truck, which were in storage since Mike (Perrotte) retired. I never sell or get rid of stuff. Mike was originally seeking help with an engine and I decided on a Wednesday or a Thursday night after he was released from the Buzz Chew ride that he was going to run my stuff. I decided to take a home equity loan and buy two big-blocks and get Mike up and running. In our first year together we had some engine trouble, but we’ve gotten that tightened up and now we are contending for wins. I don’t have all my engines with just one builder. I have engines now for the STSS and DIRTcar. It’s just what we needed to do to race.”

Huttig added, “When Mike came aboard he lived me and my wife for several months until we could help get him into a place of his own. I consider him to be part of the family, I think so highly of him.”

Mahaney was still aglow on Sunday at Devil’s Bowl Speedway from his win the night before.