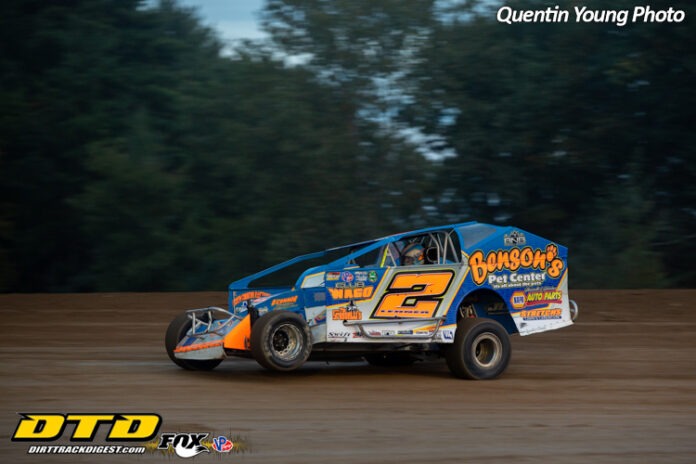 He’s a Hall of Fame driver who has devoted decades to the sport of modified racing. He had to get a loan to buy his first Modified. He went from just hoping to qualify in a heat race to being in one of the premiere modified rides of the last two decades, now Pat Ward is looking for a ride.

When asked for an interview on Friday night before his feature in the 358 division, Ward said, “I just found out about next year and really haven’t had time to seek out something for next year. I wish I had more to say but that’s all that I got at this time.”

Ward, known for his hard charging driving style but gentlemanly personality on and off the track, finished 3rd in the 50-lap feature.

Max McLaughlin was filling in for Peter Britten for the 358 race as Brittan had a prior commitment and couldn’t make the event.

Keith Flach was a participant in the big-block winners classic. He’s been struggling since debuting his new car back in August.

“We were a top three in the points here before we switched over from bars to coils. Now we are struggling to get the new car dialed in,” said Flach.

Look for Flach to go to Oswego, Eastern States and maybe Charlotte for the World Finals.

When asked about if he would consider returning back to Lebanon Valley on a full-time basis in 2022, Flach said, “We will sit down over the winter and evaluate some things. I really liked going to Orange County and not having a weekly grind. My dad would like me to go back to Lebanon, but I can always race a car somewhere.  My kids are four and two now and one just started preschool and I really liked having some days with them and my wife Chelsea. I can never get back the time with them while they are growing up. I’m also incredibly busy at work and have been for nearly two years. So the time in the shop to prepare each week is a hard commodity to get sometimes. I know god has a plan for me and I’m just trying to follow it whatever that may be.”

“Chrome don’t get it home.” That’s what it comes down to for Series regular and Ballston Spa, N.Y., native Jack Lehner. After totaling his first car early in the season at Malta, the team was forced to take there back-up car out and press it into action.

“It’s a financial thing honestly,” said Lehner. “We only have so much we can spend on a car.  While I did get another frame, we just didn’t have the funds to put that car together this year so we’ve been running this car since the accident.”

Lehner added “When we buy something like an air jack, it’s sole job is raise and lower the car that’s it, I don’t need a lightweight aluminum jack that’s a fortune. This steel one works just fine. I could use the extra money and put it towards something on the car to help get it to the front.”

Lehner will run Oswego and the World Finals, skipping Eastern States. “If we had a second car we probably would go to Eastern States but with only one car we need to conserve what we have.”

Fonda Represented Well – Ronnie Johnson won the winners classic and Rocky Warner won the dash for cash. Speaking of Ronnie, he’s the proud new papa to a new dog named Daisy. Photos of Daisy are on his social media page on Facebook.

Hydeville, V.T., native Todd Morey is the epitome of a low buck racer. Surrounded by multi hundred thousand dollar toter homes and stacker trailers, there’s Todd Morey with his open trailer, work light, tool box, tire rack and no one else to help. That’s dedication to the sport on the smallest of scales. Look for Morey to race on Sunday at Devils Bowl.

Making a rare appearance at Albany Saratoga, Orange County regular Chris Stevens was on hand with his No. 83. Stevens will be attending Super DIRT Week and Eastern States. He however won’t be making the return trip to Devils Bowl on Sunday.

Saturday was the final event of the 2021 racing season at Albany Saratoga.