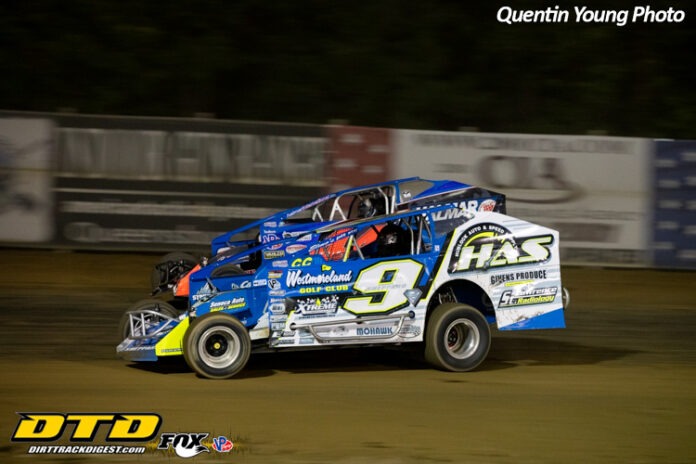 He’s about to earn his unprecedented eighth Super DIRTcar Series championship; however, the topic of engineering has widely been tossed around over the last few weeks ever since the announcement that John Wight’s race team will be folding up shop after the season is over with. In a recent story, John Wight said essentially that you need an engineer to be a successful Modified team these days. But do you really need to be an engineer to run up front every week?

According to Matt Sheppard the answer is no.

“I don’t have a team of engineers,” said Sheppard. “I don’t have a pull down machine like HBR has nor do I have the ability to just go out and purchase an engine building company like John did either. I’m going to Oswego with an engine that has 1600 laps on it because I cannot get parts. I find it to be funny that John said you need all these things to be successful when you look at what he has had over the time he’s fielded cars.

“I’m a professional race car driver. This is how I earn my living. If I don’t devote all my energy into preparation and maintenance I probably wouldn’t be this successful. Its pretty easy to dial yourself out in one of these things.”

Sheppard also was frank about his choice to miss the Fonda 200 last week.

“I did the math and it would have taken me to win the 200 to give up the Super DIRTcar Series title. That title pays $35,000 plus I won at Land of Legends that was another $10,000 so it would’ve been hard to give that up,” Sheppard added. “ I think that there was a lot of open dates in September where we could have raced on a Friday or a Sunday so as to not conflict with such a large purse. The race pays more to win than the Super DIRTcar Series and that’s a problem. There is no incentive for someone to travel all over to race at an event that pays more than the title. The title needs to pay more.

“There are two races during Super DIRT Week and on one of those nights, there will be two races against each other with them both paying $10,000 to win. It’s okay that there’s two races and two paychecks, but why couldn’t they race on Monday or Wednesday or even the day after the Fulton 200 on Sunday ? Give the fans a truly super week of racing.”

Sheppard also added that he feels the Super DIRTcar Series will be a little bleak next year with the departure of Larry Wight and Billy Decker.

“The Series will have a hole in it for sure. Those are two extremely competitive cars that show up at each event and is capable of winning on any given night”.

Stewart Friesen was also asked about the topic of engineering since he’s been the defacto driver the last two major car owners have cited as their reason’s for hanging up there ownership hats.

“Do you see any engineers in here?” said Friesen as he was doing his set up worksheet inside his trailer before the beginning of the second half of the Malta Massive Weekend. “I don’t employ any engineers on my team. I too race for a living. I read the AARN each week as I want to know what the Late Model teams are doing and the Sprint Car guys. I employ a full-time crew chief Tommy Conroy who does all the prep work at the shop and on the road. I may have gotten better at some of the things in racing like shocks and springs from my NASCAR truck racing, but I don’t have a full time engineer. I try to blot out the things that are said in the paper and online. I focus on racing the car. I don’t get involved in bridge building or things on the promotional side of the business at Orange County.”