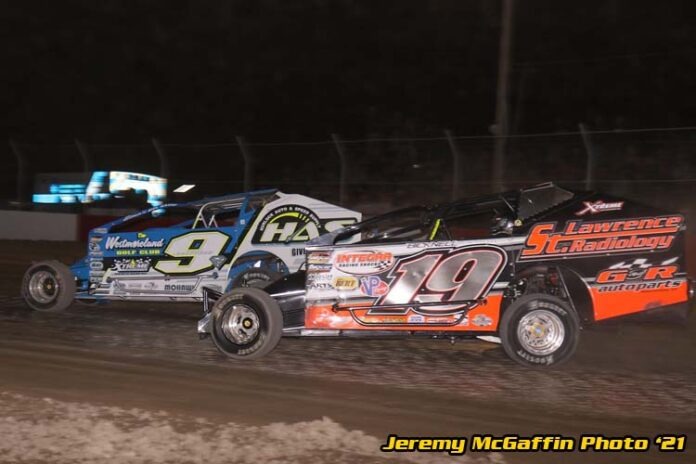 Tim Fuller making his second appearance of the season at Devils Bowl Speedway took control of the second half of the 100-lap feature and decimated the field aboard his St. Lawrence Radiology #19 lapping to nearly seventh place.

With the Super DIRTcar Series holding a Saturday night affair at Albany Saratoga, several stars of the Series made the 65-mile trek north on Sunday for the big-block/small-block challenge event. The 100-lap affair paid a handy $10,000 to win. A sum that would come in handy for any driver looking for a late season payday or a team that was planning an assault at Oswego for Super DIRT Week. With drivers like Mike Mahaney, who was fresh of his first career SDS win and a $13,000 payday, Mat Williamson who is the reigning Mr. DIRT Champion, Tim Fuller, the former Mr. DIRT Champion and former winner of the Super Dirt Week event held on the mile, Anthony Perrego, the 2021 Orange County modified champion. Then, you add in the local Vermont native drivers and you have the recipe for a fantastic night at the races.

A field of nearly 25-cars took the green flag with pole sitter Mike Mahaney setting a torrid pace from the drop of the green flag. Through the first seven laps Mahaney was blasting his way around the tight confines of the Bowl. Just behind him in second was Mike Maresca, ,who was aboard the Welling TD 5 Troyer. He was getting pressed hard for position by Tim Fuller.

On the next lap, lap 14, Maresca retook the second spot sending Fuller back to third.
As if Fuller didn’t have his hands full with Maresca, he was about to be greeted by Matt Sheppard. Sheppard, utilizing a big block, started pressing Fuller for 3rd with 18-laps in.
With nearly one quarter of the feature in it was Mike Mahaney as the leader but he was about to get company for the lead courtesy of Mike Maresca. Maresca would take the lead on lap 23, but Mahaney retook the lead just one lap later on lap 24. Sheppard found his way up to third on lap 24 and was making progress to the front but that progress came to an end on lap 28 when the caution came out for Anthony Perrego.

While under yellow, the leader, Mahaney had a flat left front tire. He chose to stay out and not pit. This would come back to haunt him just a few laps later. On the ensuing restart on lap 28, Sheppard blasted past Mahaney for the lead as they raced up the back stretch. Fuller was now up to second on lap 32 but Sheppard had gaped the field by nearly 15-car lengths.

Just nine laps later, Fuller was right on the back bumper of the 9s of Sheppard on lap 41. Just one lap later the field was slowed by caution. The caution was for the 35 of Mike Mahaney with the flat left front tire. Mahaney would get the tire changed and would finish in the top 10.

When the green came back out on lap 42, Sheppard was still in command of the race. However as the race neared the halfway mark, Fuller and Sheppard were waging a battle for the lead. Another yellow came out this time on lap 54 for Rocky Warner who was in the top five when he too experienced tire issues.

Sheppard went back to work on lap 54 as Fuller pushed him down the backstretch. Fuller would take command of the lead and the race on lap 56 as he and Sheppard exited turn one. With 68-laps in, Fuller was on cruise control. Easily navigating lapped traffic while Sheppard was still in second. Fuller was now lapping into the top 10 with 20-laps to go. The top two spots were solidified. Third place was where the action was as the race wound down.

“The Atom Bomb” Adam Pierson was running inside the top 5 as Mat Williamson, who was aboard the Buzz Chew Cadillac No. 88 was able to slip passed him for 3rd as a lap car held up Pierson as they raced down the front stretch on lap 85. Pierson had fallen back as far as 10th at lap-30.

With just two laps left, Maresca’s day came to an end while running in the top five. However, Maresca was able to pull into the infield and there was no late race drama for Fuller. He cruised into the $10,000 payday with a nearly 8-second lead, while Sheppard and Williamson rounded out the podium. Marc Johnson and Erik Rudolph who came from a 14th starting spot was 6th. A near race long battle for position between Ronnie Johnson, who qualified via a consi with a win, finished 7th was the last car on the lead lap, and 10-time track champion Kenny Tremont finished 8th, which was a well deserved top 10 for Tremont who has experienced so much struggles this year at nearly every event he’s been in.

“Racing Matt there it was probably entertaining. Matt probably didn’t see it that way. We were in and out of traffic. That’s some real racing. I was screwing around I see that 3-car get up inside of us on a restart. I think Matt’s got a big block and the black slick catered to my car. It was fun, we are still winning some races. Awesome race track it peeled up a little bit but its got a lot of racing on it. Ryan Shanahan came up today to help me out he’s raced here as a sportsman driver. I didn’t have any crew help today. Thanks to St. Lawrence Radiology and everyone that helps,” said Fuller in victory lane.

Sheppard was concise in his comments. “Tim made us look stupid out here tonight. I can’t complain though, I got a win here earlier this year and now a second. Its good night and I look forward to coming back here next year”.

Williamson who was the hard charger, put in a full night’s work to get his third place finish.

“Mike has an excellent facility here and its good racing. We had to work a little bit tonight but I’m happy to get the podium finish. Its 8p and the feature is done. I can be home by midnight,” said Williamson.

Everyone has heard or read about the massive amount of job openings. However, 3-teams at a minimum were at the Bowl without help or just one person. The brothers Morey, and race winner Tim Fuller. If you wanted to get involved in racing now would be a good time to stop at your favorite driver’s shop and ask if they need help.

According to the owner of Elmos Speed & Supply, Chris Reckner the tire shortage is worse now than ever. “We didn’t have any tires at Malta last night, Andy’s was out and Scott Jeffery doesn’t have any for Fulton this coming weekend.”

The top three drivers each received a piece of slate with a recognition of the event and place. The slate was donated by a local quarry nearby. The “Green Mountain” state is home to some of the finest slate found on earth. Other places are Portugal, Wales United Kingdom, and Newfoundland.