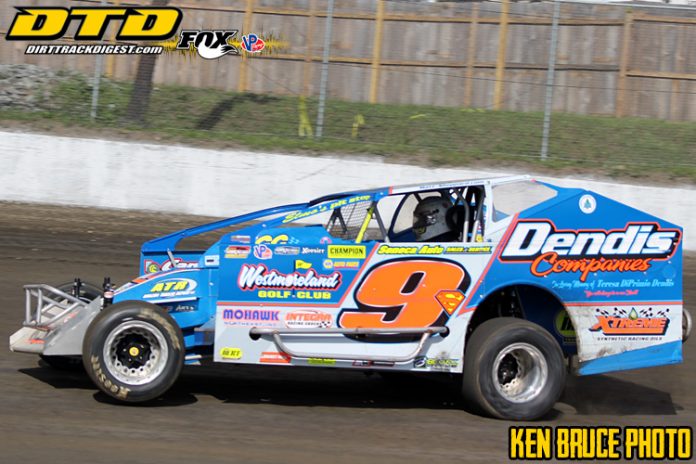 It should come as no surprise that Matt Sheppard and Anthony Perrego are sitting on the front row for today’s Eastern States 100 lap small-block race.

Sheppard was happy with his qualifying effort and hopes it’s a sign of good things to come for today’s race.

“I am just happy this car is a fast as it is,” stated Sheppard. “It definitely helps starting up front here because it’s normally hard to pass. This place is notorious for tire wear so I’m sure tires will play a big part in today’s outcome. Starting in the front should help me to be able to conserve them a little bit early on.”

However, there were a couple of surprise entrants into the today’s top six that probably nobody saw coming and one driver who you would think would be there and was albeit in a strange car.

Stewart Friesen is a driver you expect to qualify well and he did, but the Halmar Racing team had to work hard to get Friesen into a strange car after his No. 44 had terminal engine issues in the morning hot lap session.

Enter car owner and driver C.G. Morey who stepped up and offered Friesen the controls of his No. 14g to use for today’s race.

Thrashing to get the car ready for Friesen to drive for time trials both crews worked diligently together and were rewarded for their combined effort with a solid third place qualifying effort.

“Our Halmar No. 44 blew up in hot laps and C.G. (Morey) was nice enough to let me drive his car for today,” explained the NASCAR Craftsman Truck Series driver. “The car is really fast so we’ll just make few adjustments on it and get ready to race.”

“It’s a good thing C.G. been a diet lately so we don’t have worry about fitting into his seat,” joked Friesen.

After a bad day yesterday with his big-block car Danbury, Conn., driver LJ Lombardo made amends today after his put his No. 25 small-block car into the fourth starting spot for today’s race.

“Man, this car is a rocket,” said a happy Lombardo standing in the tech area. “It’s a new PMC chassis with a brand new Billy the Kid engine under the hood and man does it go. I really think if I would’ve went out a little later in the session I could’ve had the pole. I knew the car was going to be fast but I surely didn’t think we would qualify in the top six. This is really cool, to be locked into today’s feature.

Despite their bad day on yesterday with the big-block it’s been a heckuva weekend for the young throttle jockey.

“My girlfriend surprised me yesterday and came back from overseas to spend Eastern States Weekend with me and that just means the world to me,” explained Lombardo. “It really puts me in a good frame of mind for this weekend.”

Frank Venezia was another driver you wouldn’t expect to be qualifying in the top six but the veteran driver ran a great lap and found himself sitting among some of the giants of our sport with a great fifth place qualifying effort.

Probably the most surprised driver to be in the tech area as the officials went over the top six cars was young Patrick Reiser who placed his small-block into the sixth starting spot for today’s race.

“Did that really happen,” shouted Reiser as he excited his No. 33. “Man, you want to talk about being a small team. It’s just me and my dad most of the time. I can’t believe it, wow! To be sitting here in tech for the top six and to look around and see Friesen, Sheppard, LJ (Lombardo) and Anthony (Perrego) all here with me is just unbelievable.” 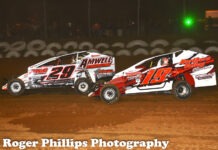 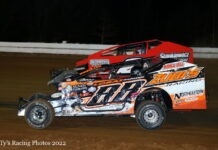