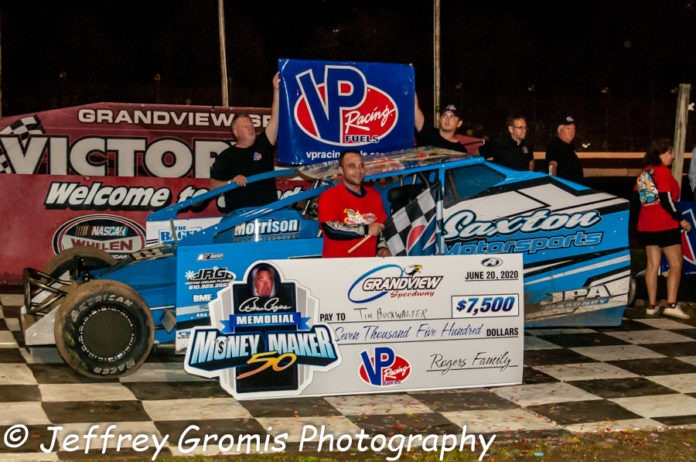 It was a Saturday night to remember for veteran open wheel and Modified star Tim Buckwalter as took the lead from Billy Pauch Jr., on lap 16 and never looked back as he went on to win the biggest Modified race of his young career. Not a bad night for Buckwalter and the Norm Saxton No. 23X team as they took home the $7,500 top prize in the race that honors the legendary Grandview owner Bruce Rogers.

Pauch took the lead at the drop of the green and looked to be the man to beat early on in the race driving the Breitenstein Racing No. 14. Buckwalter, who had started fourth, was just biding his time early on in the 50-lap riding behind Pauch, Kyle Weiss and Ryan Krachun.

Lap 14 saw the only caution of the race when Meme Desantis stopped on the track. During this caution, Weiss was forced to pit with a flat left front tire moving Buckwalter to third.

With no more cautions to slow his momentum, Buckwalter lengthened his lead to over a staightaway as the pack battled behind them. Although lapped cars slowed his pace late in the race allowing Craig Von Dohren to close in slightly Buckwalter was still in control and he flashed underneath the checkered flag to take the special victory.

“This race most definitely means a lot to not just me but to a lot of people,” cited Buckwalter while celebrating with his crew post-race in the hauler. “You know, would’ve, could’ve, should’ve, but last year we were leading this race and dropped a valve. To this day I tell people that Sheppard was going to get us anyways, but tonight it came true. It’s something about these openers here, we always seem to draw well and have speed.  It’s a shame we’re not going to be here weekly and keep carrying this speed, but we’ll be here when we can and go from there.”

After a rough night before at Big Diamond, the team was forced to show up at the shop early in the morning to get the car back together and still might not have been at Grandview if it weren’t for a rival team.

“This car was fast last night at Big Diamond and thought we were going to get another one, but unfortunately broke some driveline stuff,” explained Buckwalter. “My guys are unbelievable; you have no clue. They were at the shop at 6:00 or 7:00 this morning washing the car and trying to get it rebuilt.  If it wasn’t for Ryan Watt I wouldn’t be here today. He (Watt) lent me some pick arms for tonight and he helped with some pointers during the winter and without those dudes we wouldn’t be here.”

After struggling somewhat last year, the call was made to get a new car for 2020 and so far, the results have paid off as they team has showed consistent speed every time it hits the track.

“I said in the beginning of the year that I’ve had a couple of crew chiefs and this is nothing against them guys, but this year if there were going to be mistakes I wanted to make them on my own.  We got on to a base package here and we’ve rolled with it. We finished second at Susky with the same setup and what I got going on seems to be rolling everywhere.  We’re just going to try and keep the momentum rolling and hopefully the owners happy and we’ll go from there.”

After failing to qualify in his heat race, Von Dohren knew he would have his work cut out for him getting to the front of the main-event. Charging through the field with the help of only one caution, Von Dohren put on a show but ultimately came up on spot short at end having to settle for a runner-up finish.

“We started the night by drawing a bad number in our heat race,” Von Dohren stated as he explained his night. “We were in a tough heat and didn’t quite make it, but look at (Ryan) Godown, he made the invert and still started 19th so it’s a gamble and it sucks. The early heats are always tough, the track is heavy and it’s hard to pass because everyone is fast.”

The feature was a different story as the track had dried out some which made for some better racing allowing Von Dohren to come from the back in his self-owned No. 1C. It was a good race but Von Dohren’s competitive nature left him a little sour at the end.

“I want to win! But we’re happy with the car,” mentioned Von Dohren. “Everything is brand new; the engine is good. Even with a caution at the end I am not sure we could’ve got by Timmy, but we’ll take it and go on to the next race.”

Ryan Watt only lives a few miles from the Grandview Speedway and always likes to put on a show and run well when he races there for his many fans. Saturday night Watt survived a parade lap tangle and went on to finish a solid third.

“I’m happy with how we ran tonight,” mentioned Watt afterwards. “Starting 11th and with a lot of the race going green, with not many restarts, the car was going good. I had a little bit of a blubber there going through the middle of the corner on the bottom there. I don’t know if I have to adjust the fuel pressure a little bit or what. The car was running really good and I could run pretty much anywhere I wanted to. I could run the top, the bottom and through the middle.

“I probably should’ve pushed harder in the beginning, but I only had on a 48 (hardness of the right rear tire) so I didn’t want to run the top there too early and take a chance on overheating the tire. They gave us a great track to race on and it was better than what we had in the heats with that cushion and all.”

A total of 54 Modifieds signed in to compete at the track on Saturday. They ran a total of six heats with heat wins going to Brian Hirthler, Rick Laubach, Brett Kressley, Buckwalter, Pauch and Weiss. The three consi’s were won by Dominick Buffalino, Jeff Strunk and Mike Lisowski…

A very strange event took place on the parade lap of the main-event when five or six cars got together as the drivers were trying to get in position for the four-wide parade lap going into turn three. All cars were able to continue with only eventual winner Tim Buckwalter heading to the pits to change a flat tire. Good call by track officials to let everyone involved return to their original starting spot. I’ve been to hundreds and hundreds of races in my life and have to admit that was a first for me…

Pauch was driving the Breitenstein and Sons No. 14 looked very strong in winning his heat. Drawing the pole for the feature the team had high hopes of winning. Leading the first 15 laps, Pauch looked good but once he was passed for the lead the car continued to fade relegating him to a very disappointing eighth place finish…

Weiss had his No. 21K flying early on in the main event pressuring Pauch for the lead on occasion. Unfortunately for Weiss, he had a left front tire going flat at the time and as per Grandview rules you can run with a left front flat while green but once the caution comes out you must pit to change the tire. Weiss changed the tire under the race’s only caution and came back out but was never a factor after. It was a tough break for the Jalopa Jet…

It was a tough night for longtime Grandview competitor Kevin Hirthler. Not only did Hirthler fail to qualify in the Modifieds but in the Sportsman feature Kevin was the first driver out of the race. At least brother Brian Hirthler had a good night winning the Sportsman race…