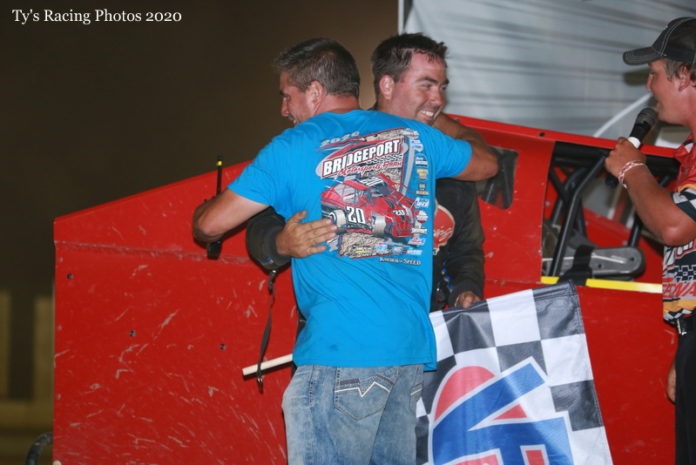 There were a lot of questions going into opening night at the new Bridgeport Motorsports Park,and if opening night is any indication of how the racing will be going forward, I think we are all going to be happy with what new owner Doug Rose has put together.

Gone is the big spacious 5/8’s mile track and in it’s replacement is a also spacious and high-banked new 4/10’s oval. I like others going into the night was not quite sure what to expect and when I was walking to my car afterwards, let me just say the new track met all my expectations and more. After talking to a couple of drivers who had practiced there the past couple of weeks, I was not sure if the track would widen out so the drivers would be able to use all the available lanes. Case closed, there were multiple grooves available and believe you me, the drivers were using all of them. The heat races and consolation races were some of the best qualifying races I have ever seen and that was just a prelude to the feature. I caught up with new owner Doug Rose to get his comments about how things went on opening night.

“I thought the night went really well,” cited Rose standing by the pit shack after the night activities were over. “The track was great, the drivers were great, everything went great. The track crew did a great job of making it wide and slick and the guys could just race all over the place. It was insane to watch.”

Godown Ushers in the New Era at Bridgeport with a Win

Ryan Godown etched his name in the record books this past Sunday night as he became the first driver to win at the new Bridgeport Motorsports Park. Starting from the outside pole position, Godown wasted no time getting by pole sitter Dominick Buffalino to start his march to victory. Even though Godown led all 30 laps, the race wasn’t easy for the “Ringoes Rocket” by any stretch. Godown had to hold off numerous challengers throughout the race which was slowed at numerous times by cautions.

“We were the first to get it done, so nobody can take that away from us,” said a happy Godown standing by his winning car at the team’s hauler. “The car in the beginning of the race was really good,then about lap 20, the car started to free up a little bit and that was just us being conservative. We probably should’ve made the car a little tighter, but we did that at Grandview and we made it too tight and ruined our night.  So tonight we tried to be a little more conservative and it almost bit us, but we were able to hold them off. I’ll tell you; I can’t remember when the last time we didn’t get our first win until the end of June.”

At almost any track, the restarts are very intense.  At Bridgeport they seemed to reach a new level of intensity.

“The restarts were tough tonight and I’m wondering how it’s going to go with deal with the flagger starting the race,” explained Godown as he talked about how the track did away with a restart zone and the drivers go when the flagger throws the green flag. “The other guy can jump at any time, if he just jumps a half a car length, he’s got the position and that’s the hard part. Like, I did not go when Laubach got me then the caution flag came out. I went on the green and he went a half a car length before the green and they did not say nothing so that is going to be the interesting part. My thinking is you have to give the leader a little advantage for being the leader. But I’m sure Doug (Rose) will figure it out. I’m sure he wanted to see how it was going to go tonight.

“Speaking of Doug (Rose), I don’t think it could’ve gone any better than it did, and I thought he was perfect on what he did all night. You could run the bottom, you could run the top, you could run wherever you wanted to. He’s (Doug Rose) done a fantastic job with this track and I look forward to running here all year.”

It’s hard to believe for a racer like Godown, that Sunday’s race at Bridgeport was only his third outing of the year and its already mid-June.

“I can’t tell you the last time when we got our first win of the year at the end of June,” mentioned Godown. “Overall, listen we were good at Big Diamond but I messed up and hit the yuke tire and then at Grandview I adjusted the car to make too tight and tonight we were I thought pretty good.  I guess we can’t get much better. I just cannot thank all the guys who help us, Steve and Diane Searock of course, and all of our sponsor Creston Hydraulics, Ellery’s Bar and Grill and Troyer Race Cars.”

Richie Pratt Jr., hung in the top five most of the race and when after 30-laps found himself bringing the No. 51 Danny Pizza Pizzaz car home with a runner-up finish. Pratt challenged Godown in the final two laps, but came up just short of the top prize.

“I thought the track was really good, it was very racy on the restarts ,but once you went a few laps it singled out a little,” cited Pratt while awaiting post-race tech under the pavilion behind the grandstands. “But overall, it was good, especially for the first-time racing on the track. It has huge potential. I gave it a shot on the last lap but timed everything wrong. I should’ve run through one and two better to get some momentum going down the back and into turn three.  I am really happy with getting second. We have a little bit of work to do to get better here but I am really happy with how it went the first time out.”

It’s hard to get a smile out of Danny Bouc most nights after the feature is over, but on this night, the Pipersville, Pa., driver was all smiles after he knew he had a chance to win.  He  just came up short at the end driving his family owned No. 32.

“Man, I’m worn out after that. At least the old Bridgeport Speedway gave you water after races,” said a joking Bouc after just exciting his car post-race. “The car was good.  I thought I had a really good shot at it, and I did my best and we just came up a couple of spots short there at the end. I shot myself in the foot there when we possibly could have won it.  It is what it is. We’ll take this, it was a good run and we’ll go on from there.”

After bringing the car home in one piece on Saturday night at the Grandview Speedway, the Danner Racing team elected to bring the No. 78 down to Bridgeport Motorsport Park to be a part of history and race on the newly designed South Jersey oval. When it was all said and done the youngster brought home a well-deserved fifth-place finish.

Dropping back early in the race, as the veterans all flexed their muscles to get to the front, Danner regrouped himself and steadily worked his way back through and at the end found himself in battle with veteran Billy Pauch Jr., for a top five spot. It was an eye-opening race for the young man, and he couldn’t have been any happier with the night’s outcome.

“Man, I loved it,” said an enthusiastic Danner. “I had never raced the old track before, and this was a blast tonight. It was so racy, I got nervous early on and started falling back and I kept getting stuck on the bottom and the top was the place to be and then at the end.  I started to feel better on the bottom but yeah, I am really happy how it turned out. I was really nervous early on about racing with a spec motor when the guy next to you has 200 more horsepower than you do but I guess it turned out alright. I had heard from a bunch of people before we came here that a spec motor was the way to go but I said no way, but it turned out they were right. We ran Grandview last night and did okay, so we said why not come down today to see how it is and I’m glad we did.”