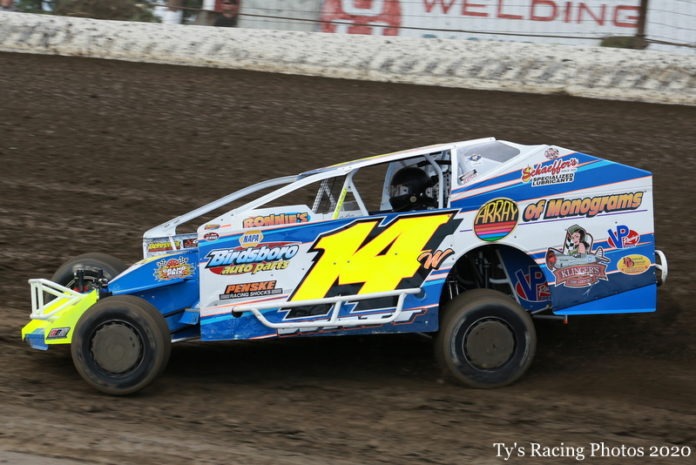 Although the Grandview Speedway is less than 10 minutes from Ryan Watt’s house in Boyertown, Pa., it’s a track he doesn’t get to run on a weekly basis. Watt has been a regular at the Bridgeport Speedway for many years on Saturday nights where he enjoyed running his Ron Roberts Racing big block No. 14W modified. When schedules permit Watt will load up the team’s spec 358 motor modified to race at Grandview where he has a legion of fans, many of whom you will see walking the speedway grounds proudly displaying Ryan Watt swag.

When promoter Bob Miller brings his “Thunder on the Hill” series to the Grandview, the Watt team makes it a point to attend these shows and have been quite successful in the past few years chalking up a few wins.

Tuesday night, the TOTH series made their 2020 debut with the annual PA Speedweek show. While the 410 sprint cars are the headliner on this night especially with the likes of NASCAR stars Kyle Larson and Christopher Bell in the mix, the Modifieds are still the bread and butter of Grandview Speedway. Even though the standing room only crowd tends to thin out some after the 410-sprint car feature, there are many loyal Grandview fans that stay to watch their beloved modifieds put on a show.

The fans who stayed were not disappointed and witnessed a great race, Kevin Hirthler and Ryan Watt diced it out for the lead early on until Watt was finally able to work his way by the Green Lane, Pa., driver to take command of the race. Hirthler stayed within striking distance behind Watt just waiting for him to make a mistake. Jeff Strunk was able to finally work by Hirthler on a lap 23 restart and apply pressure to Watt but it was to no avail as Watt was able to put a small gap on the No. 126 of Strunk to take the big win.

“This car has been really good anytime we’ve ran it this year with the exception of Bridgeport last Sunday and that was because we set it up to run the bottom and the top was where we needed to be but other than that it’s been a really fast car,” said an excited Watt standing in his trailer afterwards. “We had the car here for the Money Maker race and the car was really good.

“I wish we didn’t redraw eleventh that night. I would have liked to see if we had something for Timmy (Buckwalter) that night. We came back here with basically the same set-up tonight and it wasn’t too good in the heat, but I think that was because of the track but in the feature it worked great.”

As good as Watt has been at Grandivew, it never hurts to have some extra help on hand to let you know what the car is doing and tonight Watt had good friend, fellow driver and owner of ERK Steering Eric Kormann with him in the pits to give him a helping hand along with Penske Racing Shocks representative Dave Reedy on hand.

“A couple of years ago when we were running down at Bridgeport, (fellow racer) Dave Shirk was coming along with us and with him being a driver he was giving me a couple of pointers about certain stuff and I would be like, ‘yeah I forgot about that.’  So it always helps having another driver there to help you. The crew guys are great but it’s different having another driver there with you watching the car because they know what it feels like and what it is doing and then (Dave) Reedy was there also and he usually doesn’t get a lot of time to come out of his van and watch, but tonight he was able to and he saw some of the same things that Eric (Kormann) was talking about. I had asked Eric to keep an eye on some things, some stuff that I was trying.

“It was really good in hot laps but in the heat race, Eric was able to point out where I was lacking a little bit and then we put our heads together and came up with making some changes back to where we wanted to be and it worked. I could go anywhere on the track I wanted to be and that’s the way it’s been since I switched over to these Penske shocks. I almost killed our night early on when I wanted to see how high I could go and found out rather quickly when I bounced the car off the wall.”

Watt also discussed the battle with Kevin Hirthler for the lead.

“We had a great race with Kevin (Hirthler). He would give me plenty of room when I was running the top and then he switched to the top and I made sure to give him plenty of room. It was fun racing with him, we raced each other clean and I have a lot of respect for him and he has respect for me so that’s how we race.”

With living so close to Grandview and a lot of his crew also from nearby towns, it is always a thrill for Watt and his team to win at the Bechtelsville, Pa., oval.

“It’s always fun to win here, as a kid that’s what I looked forward to. My Grandfather bringing me up here especially for these Thunder on the Hill shows,” cited Watt. “We would come up and watch the sprint cars or the modfieds or whatever was here. They were big shows for me as a kid, being a fan like I was. I was thinking about that earlier tonight while sitting in the infield watching the sprint cars and if I wasn’t racing tonight, I would be here watching. I just enjoy being here at Grandview. I was not this close to it when I was a kid but now I am. I have a lot of fans in the area and it is awesome to come up and here and win in front of them.”

Jeff Strunk had nice run for the Glen Hyneman owned No. 126 team last night with a hard-fought second-place finish. Strunk started in the ninth spot and steadily work his way forward passing Craig Von Dohren for third on lap 19 and then getting by Kevin Hirthler four laps later for second. Unfortunately, that is where Strunk’s progress stopped as he was unable to mount a challenge to eventual winner Ryan Watt to finish second.

“We had a real good solid run tonight after starting in ninth,” said a happy Strunk while having an adult beverage at the team’s hauler post-race. “We thought we had a shot there, but second is good. After I was able to get by Kevin (Hirthler) the car became really inconsistent there. It would be loose one lap and then tight the next and afterwards we found out we had a right rear tire going flat. It wasn’t a fast leak but enough to make the handling of the car change. It went all the way flat after the race. Ryan (Watt) ran a good race and a couple of times I thought he missed the bottom, but I wasn’t close enough to try and make a move to get by. But as a team, we’re happy with the run, it’s tough sledding there having to start ninth with the quality of cars here tonight so to get to where we did was good,”

If you have any questions or comments I can be reached by email at dirtracefan25@hotmail.com or on Twitter @dirtracefan25