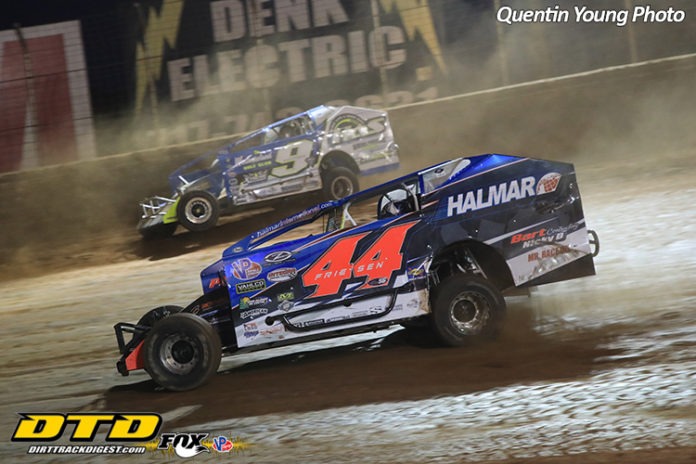 The hottest dirt Modified driver in the Northeast all season long has been Stewart Friesen. Friesen has 14 wins to his credit so far in 2020 and was looking to add to that number Sunday night in the running of the “York County Nationals” at the BAPS Motor Speedway.

Friesen uncommonly picked the worst starting spot available in the redraw putting him 12th on the starting grid. Friesen was unfazed and at the start of the race started making moves towards the front and was contending for the fifth spot when Friesen made a rare mistake and spun his Halmar Friesen Racing No. 44 between turns three and four.

Once again, the Sprakers, N.Y., driver was undeterred despite having to start at the rear.  He quickly began slicing through field to join the ranks of running in the top 10 before lap 20. Friesen continued his march to the front as went around Larry Wight on lap 30 to charge into fifth. Lap 34 saw Friesen move into fourth and three laps later he was into third setting his sights on the top two of Billy Pauch Jr., and Matt Sheppard.

These three talented wheel man put on a show for the fans as they motored around the track running under a blanket battling it out for the win. The yellow was out with ten laps to go and on the restart, Friesen was able to work his way past Sheppard and into second.

Friesen was all over Pauch for the lead, but the NASCAR Gander Outdoors Series truck driver wasn’t able to complete the job and ended up one spot short in his bid for the win.

“It was a good race, I just made a little mistake there early and didn’t see Matt down there and spun out,” said an exhausted Friesen after the race. “We rallied back there, but it just got to free there at the end. I wasn’t sure how the track was going to be for the feature, but it was good.  So we’ll put that in the notebook and be ready for the next time. I was probably a little better than Billy through turns three and four, but he would just kill me through (turns) one and two, especially coming off two. I probably used my tires up a little having to come back through and it just made it a little to free.”

It was a busy week for the Friesen and the Halmar Racing team starting with a win at the Fonda Speedway last Wednesday night. The team then took their Modified to Albany-Saratoga Speedway on Friday night and once again was able to pick up the victory. Friesen then took a plane to Texas for Saturday’s NASCAR Truck race in which the team came away with a nice fourth-place finish. Sunday morning it was back on a plane to Philadelphia to compete in the STSS race at BAPS. It was a long few days for Friesen, especially with the heat and it showed afterwards as Friesen stood by his No. 44 after the race.

“It was a good weekend, a lot of fun and a lot of racing but it was also a lot of miles,” said a smiling Friesen. “I am lucky to have two great race teams who allow me to bounce back and forth. The dirt guys did a great job getting the cars ready and the hauler here today.  Now I get to take over and drive it home now.”

Matt Sheppard gave it he had on Sunday and when it was over the driver from Waterloo, N.Y., brought the No. 9s home to a hard-fought third-place finish. Sheppard thought he had a car that was capable of winning, but some ill-timed yellow flags hurt the 2019 grand champion.

“You know we’re right there knocking on the door,” said Sheppard after just exiting his Modified on the front stretch after the race. “We’re not as good as we want to be, but at the same time it seems like we can’t catch a break with any of these cautions either. I felt like we had just worked up to Billy (Pauch Jr) and we were working him over for the lead and then the yellow comes out and we just couldn’t fire that good on the restarts.  It was taking us too long to get rolling again. Maybe if we would have had a couple more laps before the yellow came out, I might have been able to clear him and then it would be a different story.

“It seems like it has been that way for us all season, I’ll be digging and clawing for the lead or just took the lead and the caution comes out. It happened at Middletown last night, I took the lead and the caution comes out, so we have to go back to the previous lap, it happened at Fonda a few weeks ago with Stewie. I feel like I probably gave away four of five races this year due to untimely cautions and that’s a sign of not being quite good enough, but it would be nice to get one of them going our way one of these nights.

“All in all, it was a great battle tonight between the three of us and we were all probably as good as the other, I thoroughly expected Stewie go blasting by me and then by Billy but he couldn’t and then I was able to almost get him there again at the end. I guess all three of us were the best of the rest tonight, but I don’t think any of us were really that great.”

It was a rough night for the No. 2A and driver Mike Gular, but when it was all said and done, the team was able to come home with a solid sixth-place finish. Coming off a win the night before at the Grandview Speedway, Gular had high hopes for Sunday’s STSS race at BAPS.  A bad draw hurt Gular in his heat race forcing him to have to qualify through the consi. Starting the 50-lap race in the 22nd spot Gular had his work cut out for him and after taking is slowly first half of the race, Gular came on strong during the second half to record the solid finish and win the hard charger of the race award.

“Tonight was rough, we had a bad draw and got screwed up in the heat and got into a guy and surely didn’t mean to do that,” cited an extremely exhausted Gular standing in the teams hauler while trying to re-hydrate himself in the extreme heat. “We just kept digging all night and we came out of it with a top 10 finish. I thought we had a really good car and if we had started better probably could’ve had a top five and maybe a top three, but it just took us so long to get up there.

“I wanted to take it a little easy early on and try to save the tires but then it went green for so long and it started to stretch out, so I had to get going. Then we finally got a couple of yellow and we were able to get by some guys and get up to sixth.  Tt was brutal in the car tonight with the heat and those yellows at the end definitely helped out. All said and done, we had a good weekend. A couple of top tens on Friday, a win last night and sixth today, but it was grueling with the heat.”