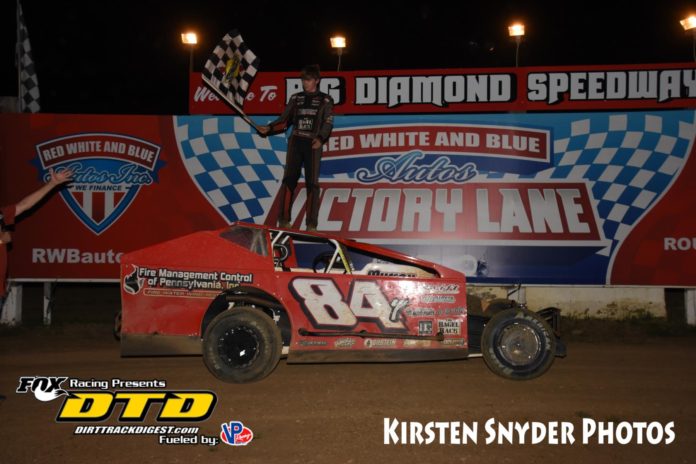 Alex Yankowski has stood in victory lane many times at the Big Diamond Speedway. The 16-year-old out of Covington Township, Pa., dominated the Sportsman division in 2018 winning multiple features and running away with the 2018 season championship.

In 2019, the young driver made the move up to the more powerful 358 Modified division. While Yankowski was able to win a couple of races last season in his rookie year at other tracks, he was never able to defeat the star-studded weekly field at his home track, the Big Diamond Speedway. Yankowski did finish a very respectable fifth in the season ending points chase, but his first Modified feature win continued to elude him.

Last Friday night, Yankowski proved that he is a force to be reckoned with at the Minersville, PA dirt oval going forward as he masterfully maneuvered his No. 84Y over the last two laps to take home his first ever Modified win.

“This is pretty cool, my first race as a 16-year-old and my first Modified win at Big Diamond,” said an excited Yankowski. “We’ve had a handful of races we probably should’ve won and we’ve either had some bad luck or we get into a wreck or the driver made an error but tonight it all came together us. I am lucky to be in the spot that I am with the guys I have.  Without Kevin Bates (crew chief) none of this would be possible. Kevin has put together a great team and his leadership at the shop and at the track are unbelievable. We have a great crew who all work super hard to make this all happen for me.”


Starting the 25-lap main event in 11th place, Yankowski wasted no time working his way to the front as he entered the top five on lap six. Lap eight saw Yankowski work his way into the third position trailing only leader Jordan Henn and second place runner Brett Kressley. The trio chased each other through the middle portion or the race and when the five to go signal was put out, they were nose to tail putting on a show for the crowd.

Henn continued to lead the way as the trio approached the two laps to go flags it was a dogfight for the top spot with Kressley working the high side and Yankowski hugging the bottom as both were trying to get around the leader Henn.

Yankowski made his move for second going down the backstretch and then for the lead going into turn three. Yankowski and Henn left the middle lane open through turns three and four and Kressley jumped at it putting his car into the mix for the lead. Coming off of turn four towards the white flag the trio were three abreast as they crossed the start/finish line with Kressley inching ahead.

Going into turn one, Yankowski kept digging on the bottom and as they charged off of turn two Yankowski was the new leader. Henn tried to get under Yankowksi coming to the finish but Yankowski was able to hold off the charge to grab his first career Big Diamond Modified win.

“It’s hard with the spec head deal. Everyone is so equal, but once we got into third, I still wasn’t sure if we were just as good or better than the leaders. After a few laps I could see that I was a little better, so I threw it in there and then I fell back off to find my groove again.  I was able to get caught back up. Without the lapped traffic I am not sure we would’ve got past him, but you just never know.”

Yankowski went on to talk about the three-wide racing for the lead taking the white flag.

“I was like man, this is going to get tight. We went down into (turn) one and I was hoping that he (Kressley) wasn’t going to go to the bottom because I am here and I am committed but Brett (Kressley) is a great guy.  He is fast and I’m sure he’ll get one here soon.”

As I finished my interview with Yankowksi, his father Steve Yankowski walked up into the tech shed and as I offered my congratulations to him, I had a chance to speak with him about his son’s first Big Diamond win.

“Thank you, this is a great feeling. For a 16-year-old kid, Alex puts a lot of himself into making this work. Sometimes too much.  I always tell him to take a night off at the shop and go do something with your friends, but he just wants to succeed so much. He (Alex) is always on the phone with someone at night trying to figure out things with the car, be it shocks, springs or anything. He works extremely hard and I am proud of him. Now we just have to get Frank (Yankowksi) a win here, it’s coming I know it.”

Jordan Henn decided to make the move this season to call Big Diamond his weekly home track. Previously Henn competed weekly at the Grandview Speedway. Henn struggled early on this season at Big Diamond.  He has been getting better week after week as he made himself more familiar with the track.

“We’ve struggled since we made the step up to the Modifieds.  I think I had a couple of fourths last year at Grandview, but that’s it. It is a totally different ballgame competition wise and you have to be able to run as hard as you can every lap. This year we just decided to make a change and come up here to Big Diamond to race. We just couldn’t get going at Grandview so we said let’s just make a change and see if we can get something to work better here.”

This past Friday Henn easily had his best race of the season. Starting from the pole position, Henn led from the onset as the he was able to get away from the field. A couple of early caution flags kept the field close, but Henn was able to maintain a safe lead each time the field returned to racing.

After the halfway flags, Kressley and eventual winner Yankowski began to catch Henn. Yankowski was able to get by Henn to take the win.  Henn gave it his best shot coming to the checkered flag just falling short. It was a race the Henn team needed to pick up their confidence.

“Man, I thought we had it there, it was close, and I was just trying to stay clean and stay on it,” cited a happy Henn in the tech shed afterwards. “I knew Kressley and them would be coming quick and coming to the white flag I missed my mark just the tiniest bit and shoved the nose up and allowed them to get by.”

Henn talked about the three-wide battle there coming to the white flag.

“I knew I just couldn’t lift and had to stay in it and run hard and just hope for the best. Yankowski kind of pushed there at the end coming for the checkered and I tried pushing it in there through the bottom but just did not have enough drive off to capitalize on it.”

Henn who is the grandson of the legendary late car owner Dennis “Moose” Eisenhard who has fielded cars at Big Diamond in the past for the late great Doug Hoffman and his brother Keith Hoffman knew he had made his grandfather proud.

“I knew he was watching down on us tonight for sure.”

27 Modifieds were in action on Friday night with Jared Umbenhauer, Jeff Strunk and Kris Graver winning the heats. Kevin Beach Jr was the consi winner…

Sending get well wishes to 2020 Big Diamond feature winner Timmy Buckwalter who was injured in an accident on Saturday July 18th at the Bridgeport Speedway. Buckwalter suffered a broken leg in two places and a possible torn ACL most likely putting an end to the season for the Douglasville, Pa., driver…

On the strength of his sixth-place finish on Friday night, Jeff Strunk has now taken over the points lead at Big Diamond. Craig Von Dohren falls to second with Mike Gular in third…

It was a very strong fifth place finish for Kris Graver in his No. 101. Graver was never out of the top five all race long, getting his best finish of the year. Graver and the No. 101 team have struggled all season long and put Doug Manmiller into the car one night to see if he could help them sort the car out. It seems they have finally found something that works and look for them to continue their solid runs…

Billy Pauch Jr was not in attendance Friday night as he was committed to racing the Holsten No. 96 at Georgetown Speedway due to the Modifieds originally being scheduled for the night off. Pauch Jr did pick up the win Friday night in Delaware…

With home track of Afton Motorsports Park not racing, Alan Barker brought his No. b16 to Big Diamond on Friday night…

Duane Howard and the Norm Hansell No. 357 returned to action this past Friday after missing the previous Friday due to hauler issues…

This Friday, July 31st will find another $4000 to win Modified feature that will go 30-laps in distance. The Open Sportsman will be a $1000 to win feature. Completing the night’s card will be the Crate 602 Sportsman and the Roadrunners…